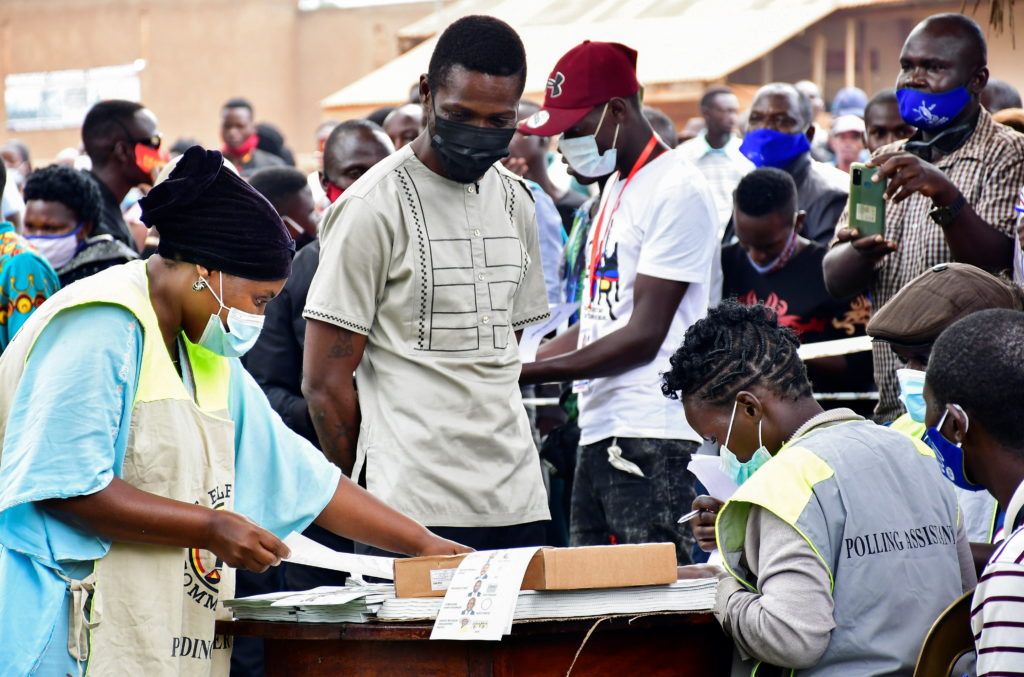 The electoral commission said this just after 9 pm tonight.

“We secured a comfortable victory,” Bobi Wine told reporters in Kampala, the capital. “I am very confident that we defeated the dictator by far.”

The drama is set to continue for the next couple of days, with fears of  renewed violence growing by the day.

The elections were marred by fear, violence and intimidation, as well as brutality by security forces amid killings.

But the election has been defined by the rise of Wine, a 38-year-old musician who has faced arrest, obstruction and gunfire on the campaign trail.

Wine’s popularity brings to the fore generational and class fissures, and the shortcomings of an economic model that has brought growth but few jobs.

However, countries like Uganda, once ruled by other dictators such as Milton Obote and Idi Amin, have come a long way.

Indeed, many countries around the world, Africa in particular.

An astonishing political transformation has taken place around the world and Africa over the past three decades with regards to elections and democracy.

A wave of democratisation has been sweeping across the developing world from the 1980s onwards, but mostly after the collapse of the Berlin Wall in 1989.

However, despite the momentous transformation that this so-called ‘Third Wave’ has brought to formal political structures in regions ranging from Africa to Asia to Latin America, only a limited number of countries have succeeded in establishing consolidated and functioning democratic dispensations.

Instead, many of these new regimes have become stuck in political quagmires and transitions, combining a rhetorical embrace of democracy and its symbolisms, with authoritarian models.
This has led to what political scientists call hybrid regimes and the challenges of democratic consolidation.

Because a broad consensus and political will to uphold democracy as the only game in town is lacking, these hybrid regimes tend to be unstable, unpredictable, or both.

In the process, they became repressive and brutal, as well as fragile.

Today, a majority of countries are generally and loosely classified “electoral democracies”, even though  in reality they are merely authoritarian states.

Even the Middle East, a region that long seemed immune to democracy, is in the midst of momentous change.

It even caught the Arab Spring bug.

In country after country, people have risked their lives to call for elections, let alone free and fair ones, and polls have been held in all but 11 countries since 2000.

Of course and clearly, there is a lot more to democracy than elections — but elections are among its most fundamental requirements, and they have become almost universal.

Elections hold tremendous promise to deepen the quality of democratic governance and accountability, but their gains are always under threat in Africa.

This is why elections should command attention and priority to reform and change. The year 2021 in Africa – which is a sign of progress, although that is not enough – is poised to be a busy political season for the African continent with more than 13 countries heading to the polls to elect new leaders.

Even though long-standing autocrats win disputed elections after stealing the votes  and people’s, more recently, blocking social media and the internet to thwart their opponents, democracy is evolving across the continent.

Yet what happened in Uganda during the elections – chaos, violence and claims of fraud and rigging – rings a bell in Zimbabwe.

While elections are being routinely held in countries like Uganda and Zimbabwe, it is high time standards are upped to avoid just going through the bloody cycles and motions of electoral fraud, violence and concomitant poor autocratic leadership.

Things have got to change. At least the young generation is slowly, but surely joining the fray as Wine and his social base have shown.

Zimbabwe needs to extricate itself from the scourge of disputed elections and associated paralysis for two decades now.