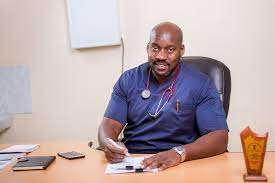 THREE years ago, when Zimbabwe attempted to qualify for the 2019 Rugby World Cup, Tapfuma Parirenyatwa (pictured) was out on the field, dishing out big hits and causing opponents a great deal of discomfort.

The Sables are still seeking the elusive ticket to their first World Cup since 1991 and, as we approach the next edition, in France in 2023, Parirenyatwa finds himself part of the dream again, for a second time in a row.

This time, though, Parirenyatwa will not be inflicting harm on the park as in the previous occasion. He will instead be attending to the injuries of Zimbabwean players in his new role as the national team’s doctor.

It has been a quick transition for the 35-year-old Cuban-trained doctor who, only in 2018, was one of firm favourites of former Springbok coach Peter de Villiers in Zimbabwe’s unsuccessful bid to qualify for Japan 2019. A tough competitor on the field and gentle giant off it, the big eighthman featured in nearly all five qualifiers for Zimbabwe – establishing himself as a strong ball-carrier with imposing physicality, great defence, mobility and ability to dominate the breakdown contest.

“The best memory from that would be having a coach who believed in me 100%,” Parirenyatwa told The NewsHawks this week.

“His (De Villiers) strength as a coach was making players believe in themselves before anything else.”

After so much was made of Zimbabwe’s goal to return to the World Cup for the first time in three decades, under a coach in the mould of the world-renowned De Villiers, Parirenyatwa and fellow senior players were under no illusion over their future in international rugby following the great disappointment of failing to qualify.

For Parirenyatwa, his career path outside sport had always been recognised in family circles. He quickly ventured into private medical practice, an ambition of his since his schooldays at St John’s College in Harare.

“There was now a new coach, new overall team, new players,” says Parirenyatwa. “And age was creeping up on me as well. Sadly, rugby doesn’t pay the bills, so I needed to focus on my career.”

Dawson was influential in sealing the reunion with Parirenyatwa after recommending him for the Sables doctor’s post, to surround himself with as much rugby knowledge as possible.

“The current head coach invited me to lunch a few months ago, we shared some old memories, had a few laughs and the deal was signed with a hug after a meal – the rest is history,” Parirenyatwa comments.

“I always knew I would be involved with the Sables for a long time even after playing, as the team doctor. It was just a matter of time. Even as I played, I was the team doctor, unofficially. On several occasions, players consulted me about their health during and after the campaign. I obviously won’t mention names, but many past and current players are my patients now.”

A team doctor who played at the highest level on the continent is definitely extra technical brains. So is the Sables’ team manager, Jason Maritz, a former Zimbabwe youth international who when not booking flights and organising accommodation for the team, can also have a thing or two to say in the dressing room. For Parirenyatwa, this is precisely why Dawson hired him.

“Dawsie has an open-door policy, so he is willing to listen to my suggestions,” says Parirenyatwa, quipping about a possible playing comeback: “Being so close with the boys makes me want to dig up my rugby boots again! I’ve been running with the Sables during this camp (in a four-nation tournament in South Africa last week). Who knows, a comeback may be imminent (…chuckles)!”

Parirenyatwa’s first assignment was in the quadrangular tournament in the Western Cape last week, where the Sables were outmuscled in the second half by old foes Namibia to lose the final 41-10. Despite this, Parirenyatwa is excited about the talent in the side, and the future.

“Zim could definitely be playing in the next World Cup,” he says.

“We are huge underdogs, but that’s the best place to be before any fight because the pressure isn’t on us. The talent in the team is phenomenal. (Tapiwa) Mafura the fullback and (Brandon) Mudzekenyedzi the wing-centre are world-class players, just to mention a couple of new players that I only met on this tour.”

Son of former Health minister David Parirenyatwa, the new Sables doctor is in every sense a chip off the old block.

“He had a huge influence,” remarks Parirenyatwa of his father.

“Fathers and parents are very influential in shaping their children’s future. I’m sure its similar in most homes.”

And he is a third-generation doctor in the family. His grandfather, Samuel Parirenyatwa, was also a doctor whose pioneering feat saw his name being given to Zimbabwe’s biggest health facility, Parirenyatwa Hospital. Sporting genes also run in the family, including his sister, the renowned broadcaster Ruvheneko Parirenyatwa.

“We are all passionate about sport,” he says. “My sekuru (grandfather), the late Dr Samuel Tichafa Parirenyatwa, who was the first black doctor in Zimbabwe, was a keen tennis player in his day. My sister Ruvheneko and brother Tadiwa played basketball at national level in their school days.”

Parirenyatwa is passionate about his job, a young doctor dedicated to making a difference in society. His healthcare enterprise has deep roots in the community.

“I love helping people,” he says.

A spur for Sables amid brutal reality check