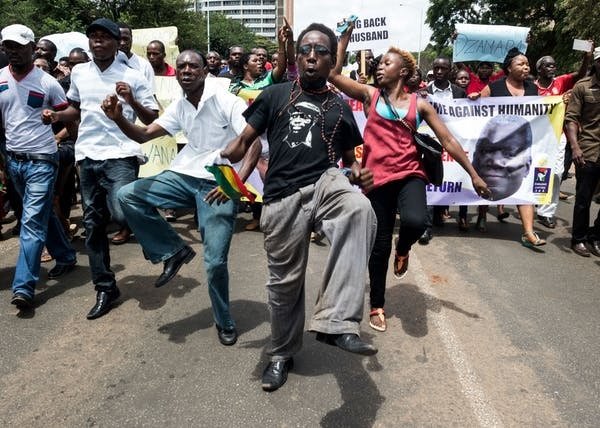 The toyi-toyi is a high-kneed, foot-stomping dance, rhythmically punctuated by exhaled chants and call and response.

Where did this ‘dance’ come from? Many people associate it with the South African township protests of the 1980s, when young men toyi-toyied as they confronted police or attended political funerals and protests. These images filled the world’s TV screens, becoming one of the most recognisable performances of the anti-apartheid struggle.

But its origins are in fact much further away, and they tell us about a much longer, global history of political and military struggle. This story played out across Africa, moving from north to south, all the way from Algeria to South Africa, with stops in Tanzania, Zambia, Angola, and Zimbabwe along the way.

We explored this history in our research. Our interest in the toyi-toyi did not come from its recent uses, but from our efforts to understand the liberation armies that fought against colonial and white minority rule in every southern African country from the 1960s.

These armies have an extraordinary history shaped by the alliances of the Cold War era. They were made up of mostly young men, who left their rural homesteads and townships for training camps that might be in the Soviet Union or Cuba, Algeria or Tanzania, Angola or Zambia.

We wanted to understand what this experience was like and what kinds of armies it made. We focused on ‘military culture’ – that is, the ideas, practices and traditions that give an army character and meaning for soldiers – and how it was instilled through training in all these different places.

The toyi-toyi proved a great way of understanding how these men learned what it meant to be a soldier, and how those ideas were transmitted over thousands of kilometres and through dozens of military camps. When the toyi-toyi eventually arrived in South Africa’s townships it was something very different from what it had been at the start of its long journey.

We interviewed members of the Zimbabwe People’s Revolutionary Army (ZPRA, also referred to as Zipra, the armed wing of the Zimbabwe African People’s Union or Zapu). We learned that the toyi-toyi’s origins were located in the training camps set up to support African liberation movements in Algeria in the mid-1960s.

Toyi-toyi was thought to be an Arabic phrase and it formed part of the songs and chants that recruits learned. For them, the toyi-toyi was a military drill – certainly not a ‘dance’ – that they associated with achieving the high level of toughness and fitness required to survive guerrilla war. Its foreign language chants and novel

movements expressed the international character of the armed liberation struggle itself.

From Algeria, the toyi-toyi moved southward, through training camps in Tanzania and then into Zambia, and in the process it changed.

It began to take on a nationalist character – the Arabic slogans were replaced with slogans in Zimbabwe’s main languages and they were refocused around expressions of loyalty to the party and its leader. This was at a time when there were many divisions that threatened the movement. The toyi-toyi became a way of

instilling loyalty and discipline as well as physical strength as many more soldiers started to fight inside Zimbabwe.

The military toyi-toyi required hours of high-kneed running in difficult terrain while carrying heavy packs and weapons. ZPRA veterans told us how they had suffered from the toyi-toyi’s demands but they also stressed that it had given them tremendous pride in their toughness and helped them to face the terrible demands of the battlefield. They remembered the toyi-toyi as an essential part of their military culture.

The toyi-toyi had, however, a different standing in other liberation armies. We can see how the toyi-toyi tells us about how military cultures were remade over time in

one army – it can also tell us about how such cultures were transmitted from one liberation army to another.

The toyi-toyi arrives in South Africa

The main South African liberation army, uMkhonto we Sizwe (MK), learned the toyi-toyi from ZPRA, in shared military camps in Angola and Zambia and on the Zimbabwean battlefield. The spread of the toyi-toyi in MK shows how extensive these interactions were.

But MK soldiers had very different reactions to it. Some denounced the toyi-toyi as a mindless, brutal physical exercise and blamed it for instituting a

These critical views of the toyi-toyi did not stop it from spreading throughout MK camps in Angola and from there southwards again into South Africa. One of the main routes for the toyi-toyi’s arrival in the South African townships was through MK soldiers who had been captured, held in the infamous Robben Island prison and subsequently released in South Africa.

These men were heroes to many young people in the townships. Performing the toyi-toyi was a means through which young men and women could link their protest to the glories of the armed struggle – now in the form of an at times joyous, at times menacing ‘dance’ rather than a military drill.

The toyi-toyi has continued to change its meanings – it has taken on many different political roles for people with no connection to the liberation struggles. By tracing its journey, we can learn how liberation movements’ militaries were made – and also how they spread into a much wider political culture which remains significant today.

Long Read: Exploring the idea of reinventing the intractable Zimbabwe into the future

COVID-19 Agency: What Africa and its Diaspora Should Do and How