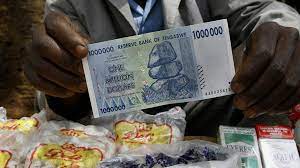 THOSE who survived Zimbabwe’s catastrophic hyperinflation of 2008 will tell you that although the surging tide in runaway prices somewhat resembles a prolonged slow-motion accident, there comes a moment of stupefying impact, which signals to all and sundry that the game is truly over from that point onwards.

As human beings, we experience life’s misfortunes in differing ways. This is because, although the basket of troubles that assail humankind seems fairly predictable in general terms, people’s granular lived experiences are rarely similar.

And so, true to this immutable law of life, the hyperinflation of 2008 had the uncanny ability of serving everyone a special dish which appeared rather unique and specific, as if tailor-made to inflict a special dose of suffering on each particular person.

For an embattled worker back in the day, the moment of truth finally arrived upon the realisation that an entire monthly salary was not enough to pay for a single commuter omnibus fare to the workplace.

All along, that unfortunate worker — through sheer guile and inventiveness — would have somehow managed to continue reporting for duty, even as it became increasingly clear that the end was nigh. Another employee, say in a different town, would have finally arrived at the moment of truth upon realising that they could not even withdraw their salary from the bank, owing to a shortage of physical cash.

There are no words to explain the feeling of utter hopelessness which engulfs a breadwinner who fails to withdraw money from their bank account while prices in the shops are go[1]ing haywire by increasing five times a day.

In April 2022, Zimbabwe has not yet scaled those heights of hyperinflation, but the ongoing turmoil is evoking much dread and trepidation.

American inflation expert Steve Hanke says Zimbabwe has overtaken Argentina as the country with the world’s fastest galloping prices, measured on year-on-year basis. Nobody should be surprised. The government is just not showing leadership on economic management.

Finance minister Mthuli Ncube still claims — with a straight face — that the economy is in a stronger position. The stark realities on the ground are exposing this assertion for what it is: hollow propaganda. When the new ZW$100 bank note was introduced into circulation recently, there were gasps of disbelief when people noticed that the bill is actually dated 2020.

Some people laughed at this rank absurdity, but the joke is really on them, as prices continue spiralling out of control. Alarmingly, as the clueless government gropes in the dark for the answers, some officials are pushing for a ban on the use of the US dollar in the economy.

It is a ridiculous proposition. If you ban the US dollar, do you have the capacity to defend the Zimdollar against the greenback? Even your gold and 40-odd minerals cannot shore up the local currency because — by the government’s own admission — bullion worth US$100 million is being smuggled out of the country every month.

Mnangagwa did not stop there; he notably attributed the economic mayhem to “imported inflation”.

These days, this term is often used by incompetent officials as a convenient euphemism for the US dollar. They believe in the magic bullet: ban the use of the US dollar and the crisis evapo[1]rates instantly. The authorities have previously masterminded audacious heists on hapless citizens, raiding people’s forex accounts with impunity.

In the next few weeks, citizens can expect more misery from clumsy experiments as the echoes of 2008 reverberate across a troubled economy. There is a painful sense of déjà vu.

Related Topics:Economyinflationmthuli ncube
Up Next