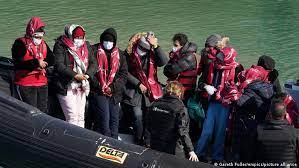 The UK and Rwanda have announced a deal in which the UK will send some people claiming asylum to the East African nation where their cases will be processed. If they are granted asylum, they will be encouraged to remain in Rwanda for at least five years. Refugee expert

Evan Easton-Calabria (A) answers questions (Q) and provides key insights into Rwanda as a refugee host.

(Q) Could you give us a picture of Rwanda’s refugee operations?

(A) Rwanda hosts about 127 585 refugees, the overwhelming majority of whom come from just two countries: the Democratic Republic of Congo (about 77 288) and Burundi (about 49 827). This is a significant number that nonetheless pales in comparison to neighbouring Uganda’s approximately 1.5 million and Kenya’s 550 000 refugees.

Rwanda has six refugee camps. Of the six camps, the Mahama refugee camp is both the newest and the largest, home to over 56 000 refugees. The other five are much smaller in size.

An estimated 50,000 Congolese refugees have been in Rwanda since 1996. They are mainly of Banyarwanda background (including both Hutu and Tutsi) and fled to Rwanda to avoid persecution by the Interhamwe (Hutu militia) in 1995 and 1996. For over 20 years they’ve mostly been living in camps like Kiziba, the oldest refugee camp in Rwanda. Almost 17 000 Congolese refugees live in Kiziba.

Most Burundian refugees arrived in 2015, after a widespread civil conflict. At the time over 70 000 Burundians came to Rwanda, mainly staying in the Mahama camp.

(Q) Who is in charge? What challenges do they face?

(A) The responsibility of assisting refugees in Rwanda is coordinated between the UN Refugee Agency (UNHCR) and Rwanda’s Ministry in Charge of Emergency Management. Together they manage refugee camps, repatriation, and projects – like environmental protection – in and around the camps. UNHCR largely defers to the government and only plays a supporting role in refugee assistance.

There are also various partners who provide services like healthcare, water, and shelter in the camps. But even in longstanding camps like Kiziba, refugees face limited access to electricity and clean water. Because inhabitants have been there for a long time, their family sizes have grown but infrastructure hasn’t kept up.

While assistance agencies can address some of these challenges, they are constrained by both practical and political factors.

Rwanda is a small country, about 26 000km2 in size. Finding available land to expand refugee camps or which refugees can farm is difficult. Rwanda is also a very politically restricted country. Constraints on political advocacy and freedom of speech affect citizens, refugees, and assistance agencies –including UNHCR. They risk their activities being curtailed if they denounce the treatment of refugees, like the killing of refugees in Kiziba and Karongi Town.

In 2018 Rwanda committed to applying the Comprehensive Refugee Response Framework, the current global approach to protecting refugees. The framework includes a commitment to help refugees build self-reliance, in large part through promoting their integration and economic inclusion. The Government of Rwanda has for example committed to making banking services accessible to refugees and to issuing refugees with national identity cards.

But there’s dwindling aid funding for protracted refugee situations. For instance, in 2021 the World Food Programme announced it would reduce food assistance to refugees in Rwanda by a shocking 60% – three years after a 25% food ration cut for refugees in Rwanda was the basis for protests which led to 11 refugee fatalities.

In 2021, just 55% of UNHCR’s operation costs to support refugees in Rwanda was covered by funding. This figure is all the more worrying when compared against the level of need – the number of refugees in eastern Africa has almost tripled in the last decade from 1.82 million in 2012 to nearly 5 million in 2022. Funding shortfalls mean that more than 70% of these refugees do not receive a full food ration.

In the face of declining funding, the idea of refugee self-reliance is appealing to donors. But as my colleague, Naohiko Omata, and I discuss, becoming self-reliant isn’t straightforward.

Refugees in many countries remain in camps and don’t have access to social or business networks or other resources they might need to access or create employment. For example, while refugees in Rwanda have the right to freedom of movement and work, in practice it’s difficult for them to move around because of bureaucracy as well as the remote location of some camps. Officially they must receive permission to leave camps; this alone can take up to a month. And they have to return to camps regularly to renew their permits.

In many situations, reducing aid – on the assumption that they’re becoming more independent – has severely compromised refugees’ well being.

Helping refugees find avenues to generate income and live independently from aid can be positive for donors, agencies, and refugees alike.

But reducing assistance in inappropriate conditions risks refugees turning to family or friends, who are equally impoverished. This adds to the stress and difficulty of refugees’ lives and doesn’t mean that they will be encouraged – or are able – to become self-reliant.

Instead, fostering refugees’ independence from aid may instead necessitate more support initially, be that in the form of cash grants, micro-loans, or intensive skills training.

(Q) Is there anywhere getting it right? What can be done better?

(A) Rwanda’s neighbour Uganda is often held up as the model country when it comes to enabling refugee self-reliance. It’s been lauded for providing land to refugees to farm on, and for having a relatively open legal environment in which refugees can run businesses and even direct their own community organisations to help each other. At the same it is clear that it is not perfect. For example, if refugees want to live in any urban areas besides the capital, Kampala, they forfeit their right to receive humanitarian assistance and often remain unseen and unsupported.

Ultimately, supporting refugees better in the region means granting rights – like the right to work and freedom of movement – and enabling access to these rights. Refugees in Rwanda have many of the same rights as those in Uganda yet face more challenges and discrimination in accessing them. Lack of assistance in urban areas, or the right to legally reside in them as recognised refugees, is a crucial ongoing issue in many countries in the region and beyond.

Self-reliance programmes must address these structural barriers. And donors and agencies must recognise that promoting refugees’ independence from aid will not occur simply by reducing it.

This article, originally published in 2019, has been updated to reflect recent developments.–The Conversation.