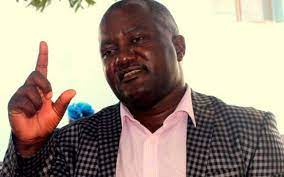 OUTGROWER sugarcane farmers in Chiredzi have written a letter to the Minister of State for Masvingo, Ezra Chadzamira (pictured), requesting him to stop Member of Parliament for Chiredzi West Farai Musikavanhu from interfering with their issues as players in the sugar industry move to present their position during the ongoing amendment of the Sugar Production Control Act of 1963.

MORRIS BISHI
The move comes after a forensic report by Enerst and Young into the management of grants and loans under the Successful Rural Sugar Cane Farming Community Project (SusCo Project) undertaken in 2014 leaked to farmers this year.

The SusCo project, which was meant to improve yields by outgrower farmers, was funded by Tongaat Hullet through BancAbc at a cost of US$30 million and the audit was requested by farmers to establish whether the project, which left many farmers in debt, was successful.

The report revealed that outgrower farmers were overcharged for services which they were not even rendered. It also established that Tongaat Hullet employees, including senior management who are also farmers, benefitted from the programme but never paid anything and their debts were shifted to other farmers.

In the letter to Chadzamira dated 22 March 2021 which was signed by chairperson of Triangle Mill Group Gibson Mashingaidze and his counterpart from Hippo Valley  R. Mapiye on behalf of all farmers, sugarcane farmers urged Chadzamira to take action on Musikavanhu.

They accused him of interfering with the work of Leadway Consultancy which was hired by the farmers to assist them recover money deducted by Tongaat Hullet through an unfair division of proceeds (DoP) ratio backdating to 2016.

They accused Musikavanhu of having conflict of interest after being a beneficiary of the unfair practices when he was still the director of agriculture at the sugar producer.

“We request you to intervene and whip our Honourable Member of Parliarment Hon. Musikavanhu whose behaviour before and after our meeting with you tantamounts to (sic) interference with works of Leadway Consultants hired by farmers to review their challenges. Musikavanhu issued statements attacking the preliminary reports produced by the Consultants and further sent chats implying that he oversees the Consultancy.”

“Farmers hereby urge your office to assist our Honourable on good governance practices. Our Honourable who is implicated as a beneficiary of bonuses that accrued to the management executives as a result of fradulent transactions against farmers is failing to seperate his conflict of interest as a suspect from his constitutional mandate. We kindly urge your esteemed office to assist him in this regard,” reads part of the letter which is in the possession of The NewsHawks.

The forensic investigation into the SusCo Project covered the period from 1 May 2011 to 31 December 2012 and the report was released on 24 May 2014. It was shelved by Tongaat Hullet Zimbabwe (THZ) management due to its negative impact on the image of the company. It only reached the farmers this year after the sugar giant retrenched a number of senior managers including directors.

“However, we did not find any internal controls or measures taken by THZ/SusCo management/Board to deal with the resultant conflicts of interests. We were availed with completed Declaration of Business Interests forms for only 28 THZ employee farmers.”

The report noted that Musikavanhu, who was a director, received more inputs than the standard quantities prescribed by SusCo for his farm size in Mkwasine.

It also noted 2 850 excess seedcane bundles worth US$252 140 (based on the THZ-approved seedcane purchase rate of US$88.47 per tonne effective 1 May 2012) which were paid for and delivered to 54 farms of which 43 (80%) were THZ employee-owned and managed farms. A total of 19 of the 43 farms which were owned and/or managed by THZ employees received agrochemicals worth US$18 081 in excess of the standard input requirements for the hectares planted.

Some of the senior managers at THZ were shareholders of private companies which were awarded tenders during the project, among other findings.

Commercial Sugarcane Farmers Association chairperson Addmore Hwarare told The NewsHawks that farmers appealed to Chadzamira over two issues which are the behaviour of the local legislator as well as the Ernst & Young 2014 report which was never shown to farmers until this year. He said the SusCo project, which was spearheaded by the then Vice-President Joice Mujuru, left all outgrower sugarcane farmers poorer due to overcharging by THZ management and looting whose obligation to repay was given to innocent farmers.

“Personally l am yet to pay thousands of dollars for a service which was not given to me. They overcharged us and that was revealed by the 2014 investigation which they never gave us. We got the report this year after some fired or retrenched managers leaked it to us. We approached Chadzamira and minister of Industry and Commerce Sekai Nzenza over the issue,” said Hwarare.

Efforts to get a comment from Chadzamira were fruitless as his phone was not being answered throughout the week.

Tongaat Hullet corporate affairs and communications executive Adelaide Chikunguru said she was not aware of the 2014 forensic report and asked The NewsHawks to send the report and questions via email. She is however yet to respond to the questions.

A THZ senior manager who is not allowed to speak to the media told The NewsHawks that it was agreed within the top management that the damaging report must not be released since it was going to cause an outcry with aggrieved farmers likely to approach the courts for redress.

He said some of the retrenched top managers leaked the report to farmers early this year.