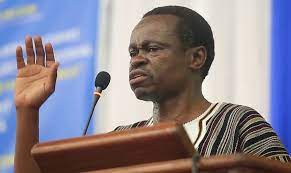 POLITICAL parties must desist from violence but compete for power on the basis of ideas, a prominent Kenyan public intellectual and lawyer says.

In an interview with The NewsHawks on the sidelines of his public lecture in Harare this week, Patrick Loch Otieno Lumumba said politicians must unite to rebuild Zimbabwe, a country reeling from a severe economic crisis.

His presentation was titled “Rethinking the State: Is Africa Cornered on Resource Extraction and the Conundrum of Development in the 21st Century?” and the event was organised by the Zimbabwe Institute of Strategic Thinking (ZIST).

Dozens of people who included the European Union Ambassador to Zimbabwe Timo Olkkonen, businessman Nigel Chanakira, among others, attended the Harare event.

“As I have always said, democracy is a competition of ideas, let ideas compete and, as I have always said, it is not easy in nascent democracies, but a competition of ideas is what gives birth to sustainable development,” Lumumba said responding to questions on the blocking of the opposition Citizens’ Coalition for Change (CCC) rally in Gokwe on Saturday and the violence in Kwekwe that led to the death of a young activist.

Mboneni Ncube (35), a father of one from Mbizo suburb in Kwekwe, succumbed to injuries he sustained following a violent attack by Zanu PF thugs during a rally addressed by CCC leader Nelson Chamisa.

Several activists were injured in the attack while at least 16 suspected Zanu PF activists were arrested. Eleven of the ruling party supporters have since been released without charge.

Pockets of violence have also been recorded across the country ahead of the 26 March 2022 by-elections and the 2023 elections.

Lumumba said Mnangagwa has had a slow start to economic transformation, adding that only unity with the opposition and stakeholders will aid in rebuilding Zimbabwe.

In 2018, Lumumba expressed optimism that Mnangagwa would transform the economy following the November 2017 military coup that saw the political demise of the late former president Robert Mugabe.

But asked whether he was still as optimistic as he was years ago, Lumumba said the Zimbabwean economy has failed to grow “as robustly as it should have grown.”

“Optimism must never die,” he said: “It is in the nature of human society that we must remain optimistic. A number of things have taken place, the world has been hit by Covid-19, there has been economic difficulties (and) Zimbabwe as a country has laboured under the weight of sanctions.

“In the face of all those difficulties I think the economy has not grown as robustly as it should have grown.

“But I hold the view that if the leadership both within government and within the opposition recognise that what they are struggling for is one Zimbabwe; there are no two Zimbabwes. There is no Zimbabwe for the government, the current administration and another for the opposition. It is one Zimbabwe and if people unite to ensure that that Zimbabwe knows economic growth then I have no doubt in my mind that useful gains will be made,” Lumumba said.

Lumumba, a proponent of a united Africa, said there was a need for unity among countries for the continent’s economy to grow. But in response to whether the current crop of leaders were competent enough to push for that, the respected orator and academic said: “Leadership is inter-generational, but I will not judge Africa on the basis of its current crop of leaders. I believe that African men and women are capable in the fullness of time, of carrying forward the agenda that will ensure that Africa grows.”

“If you look at the history of many nations, there is successive leadership and successive demands for that which is good, that is carrying those countries to where they are so I have no doubt in my mind that Africa will know development economically, politically and otherwise,” he said.

”In a confederal Africa, all those who are running countries such as Zimbabwe, Ghana, Kenya would be governors of those units,” he said, adding that it may only happen in 20 to 30 years’ time.

“In your lifetime (yes), not in my lifetime, but I think I am beginning to see signs that tell me that Africans in the political class, in the business class, are beginning to recognize that the more unified our economies are, the better for the continent of Africa,” he said.

“The African Continental Free Trade Area is a statement that we must trade more, that we must integrate our economies more and sooner rather than later we are going to recognize that even monetary policies are unified. Once you do that, then it will be necessary to have a single currency that facilitates intra-Africa trade. It may take 20 to 30 years but it is coming,” he said.

During the address, Lumumba described African politics as toxic, adding that everyone wants to be a politician as a way to avoid scrutiny from corruption.

“Let us introduce hygiene in African politics. It is toxic. Politics is the biggest industry now and everyone wants to be a politician because it immunises you from scrutiny. We must rethink our politics,” he said.