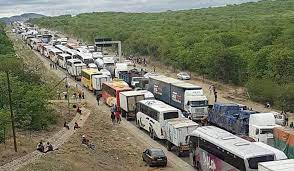 SOUTH Africa says a Zimbabwean private company contracted for the US$300 million upgrade project of Beitbridge Border Post was responsible for the recent congestion and chaos at the busy point of entry — the gateway into the region between the two neighbouring countries — which blocked business for days at huge cost.

New bottlenecks and chaos rocked Beitbridge as haulage trucks took up to five days to be cleared after Zimborders, a private company contracted to upgrade the border on a build-operate-transfer arrangement, is levying US$201 per vehicle passing through the just-completed commercial terminal without an efficient electronic payment system.
The company also introduced user toll fees payable in cash. This, coupled with system failures, created the logjams.

This come as the new US$260 million Kazungula Bridge between Botswana and Zambia opened in May is growing in traffic volumes, providing Beitbridge serious competition. The project seeks to facilitate trade activities and the global competitiveness of Zambia and Botswana, improve the regional connectivity of the North-South corridor and contribute to improved regional integration.

The new Beitbridge commercial section was opened last week, but instead of smoothening the flow of traffic and goods across the border, it brought worse congestion in the processing of transporters, particularly commercial cargo vehicles carrying goods into the region.

Yesterday, the South African portfolio committee on home affairs chairperson Mosa Chabane said while they welcome assurances given by relevant departments to resolve the issue, they were clear that the problem is on the Zimbabwean side.

“It is always a concern when there is congestion at our ports of entry, especially Beitbridge because of its strategic economic role to South Africa and the continent at large. But we welcome the assurance that interventions agreed to are already being implemented and will progressively have the envisioned positive impact on the congestion,” Chabane said.

“Despite this, it must be placed on record that the cause of the current congestion is primarily due to the concessionaire (Zimborders) on the Zimbabwean side introducing user toll fees payable in cash. Following fruitful interactions between the two countries, a card payment method will now be implemented.

“In line with this, the committee appreciates that its oversight mandate does not extend beyond the South African side of the border and it will continue to strengthen its work to ensure that its systems are efficient and effective. The committee has on numerous occasions visited Beitbridge to inspect challenges and will not hesitate to visit the border post again if there is a logical need to do so.”

Chabane said the committee can only call on the South African government to heighten pressure on their Zimbabwean counterparts to find a workable solution to the congestion.
The committee intervened following its visit earlier in the year, demanding that talks between the two countries be intensified to ensure smooth movement of people and goods. It said it would continue to monitor implementation of the interventions and take further measures necessary to resolving the crisis.

The border crossing, a critical point for the movement of cargo between South Africa and Zimbawe, as well as their southern African neighbours across the region, is a critical point of entry which serves scores of commercial cargo vehicles daily.

Congestion has been common in Beitbridge in recent months, especially in December last year and January this year where hundreds of people were stranded for days until emergency interventions had to be made.

Despite interventions, further disruptions to the supply chain are likely unless a lasting solution is found.

Zimborders spokesperson François Diedrechsen blamed Covid-19 lockdowns and curfews for the congestion. The Road Freight Association of South Africa said it was concerned about the situation at Beitbridge, which was triggered by an electronic system problem on the Zimbabwean side.

Association spokesperson Gavin Kelly was quoted by South African media as saying: “There seems to be a lot of finger pointing at the moment, what we do know is that about two weeks ago the Zimbabweans activated a new system, there was a new bridge that came into operation and a couple of new processes to get through and it seems despite the best efforts trying to deal with this matter, something has gone pear shaped.

“What we have been told is that there are problems on the Zimbabwean side in terms of processing through and this is now causing a backlog, but the Zimbabweans are saying the trucks are arriving at the border post with the wrong paperwork.” — STAFF WRITER

How I salvaged my life from drug addiction: Difficult, but possible