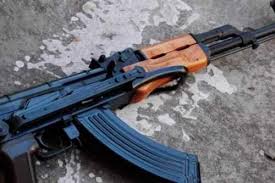 SOLDIERS deployed at the residence of the late Zimbabwe Defence Forces commander Vitalis Zvinavashe have landed themselves in soup after three AK-47 assault rifles and several rounds of ammunition were stolen at the national hero’s home, as cases of armed robbery involving military personnel increase, The NewsHawks has established.

As Zimbabwe makes frantic efforts to recover from two years of economic decline, reports of soldiers involved in robberies have been on an increase, posing a security threat to the country.

Impeccable sources told The NewsHawks that the assault rifles and bullets were stolen on Wednesday where soldiers from Harare district, which is stationed at Josiah Magama Tongogara Barracks (formerly King George VI Barracks) were deployed.

“The soldiers were deployed to provide security services at the house of the General’s widow when the guns went missing. Investigations on where and why the rifles were stolen are ongoing. “Heads will definitely roll,” a source familiar with the developments said. This publication did not establish whether or not Zvinavashe’s widow was at home when the incident happened

In 2009, a senior army officer committed suicide in the wake of a break-in at a military armoury in Harare amid growing fears that the missing guns would be used to fuel instability.

In late 2009, 20 AK-47 rifles and a number of shotguns were stolen from the armoury at the Pomona Army Barracks in Harare. The deputy commander of Pomona barracks, Major Maxwell Samudzi, “committed suicide” while being held in solitary confinement.

Last year, 10 serving soldiers were arrested for armed robbery in Chinhoyi. Ishmael Neboet Zibula aged (29), a corporal at the Inkomo Parachute Regiment; Spencer Chigondo (29), a corporal in the Commando regiment; Ruka Matemai Bitone, a colour sergeant (39); James Bhebhe alias Mitewell Moyo (29), a corporal; Trust Hapanyengwi (31), also a corporal; Mighty Nyoni (34), another corporal and Chadmore Chakaingesu (42), who is a colour sergeant, were locked up in connection with a spate of robberies in Mashonaland West province. Efforts to get a comment from Zimbabwe Defence Forces spokesperson Colonel Teddy Ndlovu last night were fruitless, as he was not answering phone calls. — STAFF WRITER