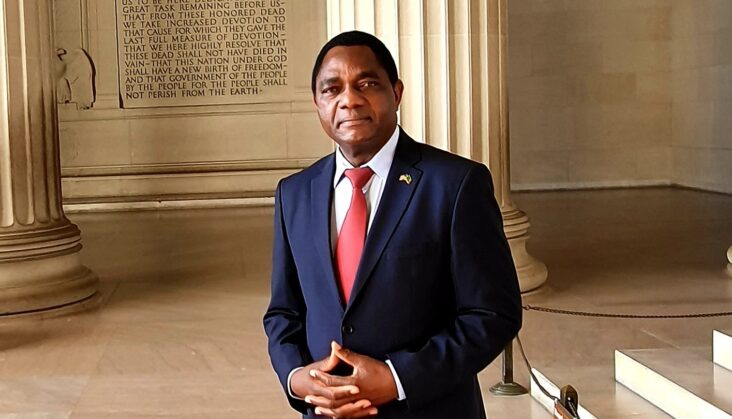 WHILE Zimbabwe is drowning in debt and making frantic efforts to get debt forgiveness and bridge finance to pay off arrears from the world’s wealthiest economies, neighbouring Zambia is now on the cusp of inking a debt relief agreement, thanks to the goodwill currently being enjoyed by President Hakainde Hichilema’s administration.

Since his ascendancy to the helm last year, Hichilema (pictured) has been working round the clock, promising creditors that he would place the copper-exporting country back on track. The former opposition leader inherited huge foreign public debt of at least US$14 billion from his predecessor Edgar Lungu.

In promoting a culture of transparency, Hichilema, among other key reforms, cancelled public projects costing more than US$2 billion and strengthened Parliament’s oversight role. This is unlike in Zimbabwe where Parliament had until recently been relegated to an institution for rubber stamping executive decisions pushed by the governing party.

Zambia’s debt plan revolves around a US$1.4 billion loan negotiated with the International Monetary Fund last December. The loan will help Zambia pay off its debt and social services. The debt restructuring plan, which is likely to win the support of G7 countries, is in motion and also requires China’s support.

The International Monetary Fund has indicated that the debt restructuring deal which is expected this month will be enough to officially ratify the US$1.4 billion loan to Zambia. Hichilema promised to revive copper mining after his predecessor threatened takeovers in a populist nationalist drive. In Zimbabwe, the economy was nearly brought to its knees when long-serving leader Mugabe signed indigenisation into law.

His successor, Mnangagwa, who came to power in 2017 following a military coup, promised to break with the past but not many investors and creditors are convinced.

On the other hand, bankrupt Zimbabwe, which has been moving in circles despite announcing a litany of debt strategy over the years, appears stuck.

Harare’s sincerity in implementing the letter and spirit of a raft of political governance reforms will come under the spotlight as the country embarks on an ambitious African Development Bank-backed diplomatic offensive which seeks to anchor the country’s arrears clearance, debt relief and restructuring programme.

Zimbabwe is expected to remain in debt distress in the absence of a comprehensive arrears clearance strategy aimed at debt sustainability in the post-Covid era, sustained economic recovery and growth. Official figures show that Zimbabwe registered 6% growth in 2021 after enduring two successive years of economic contraction.

Desperate to extricate itself from a ballooning debt overhang, Harare has now settled on two options: the initially disdained Highly Indebted Poor Country (HIPC) model and a hybrid of concessional loans, use of domestic resources and restructuring.

Following several failed attempts to settle the ballooning debt such as the Zimbabwe Accelerated Arrears Debt and Development Strategy (ZAADS) and later the Lima Plan of 2015, Zimbabwe, according to the IMF, is now pursuing the HIPC model, which during the Government of National Unity was frowned upon by Zanu PF.

AfDB group president Akinwumi Adesina flew into the country last week at the invitation of Mnangagwa and Finance minister Mthuli Ncube to take a leading role in helping Harare normalise relations with creditors.

Zimbabwe has been left with a few options except seeking debt forgiveness and sourcing bridge financing from potential sponsors.

But most Western powers, which are key in supporting Harare’s ambitious plan, doubt Mnangagwa’s commitment to effecting a raft of political reforms needed to normalise relations with creditors and the international community. Apart from political governance reforms, critics say Zimbabwe’s diamond industry, which may play a critical role in bringing out millions out of poverty, remains opaque.

Despite all these hurdles which have been impediments in the past, Adesina remains optimistic that Zimbabwe will break its debt cycle.

“It is going to be challenging, but it is not impossible. Failure is not an option. The arrears clearance strategy must succeed,” Adesina said.

“It is about the people of Zimbabwe. They have suffered long enough – for two decades now. When you look at the situation today, 40% of the country’s population live in extreme poverty. We must change that and create new hope. I believe that it is time to re-invigorate, and re-dynamise the country’s economy because it is critical for the southern African community.”

Adesina said despite economic challenges, Zimbabwe remains a strong and reliable shareholder of the AfDB. He said the debt-troubled southern African nation has continued to make quarterly token payments of US$500 000 to service debts to the regional lender, the World Bank and other creditors.

“Zimbabwe is one of the 54 African member countries of the African Development Bank Group. When one part hurts, the whole body hurts,” Adesina said.

IMF managing director Kristalina Georgieva recently warned that a global economy heading downstream would aggravate the crises of the 30% of emerging market countries and 60% of low-income nations already in or near debt distress.

Beyond other IMF actions such as last year’s release of US$650 billion in Special Drawing Rights, “Decisive action by all involved is urgently needed to improve and implement the G20’s Common Framework for debt treatment,” she said.

Without any reforms, Zimbabwe is however ineligible to access additional SDR holdings from G7 countries.–STAFF WRITER.