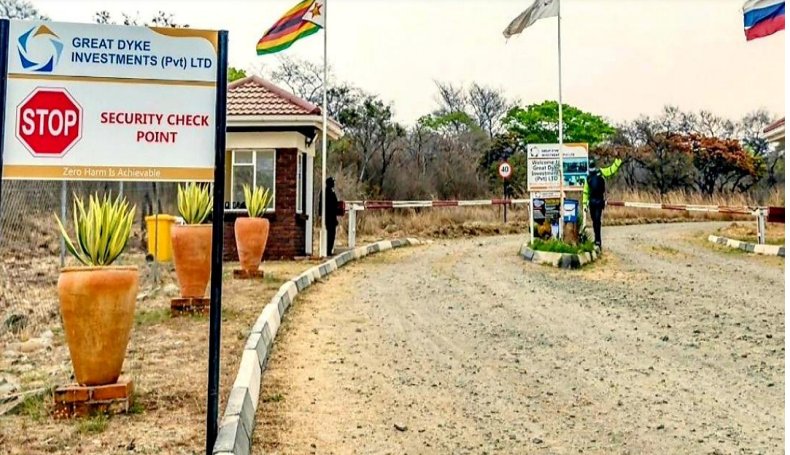 AN off beam and shoddy mining development approach led to the collapse of some shaft at the stalled US$3 billion Zimbabwean and Russian-owned Great Dyke Investments (GDI) platinum project in Darwendale, 65 kilometres west of the capital Harare.

The project was expected to be one of the biggest mining developments in the world on a massive and rich Great Dyke deposit in a country which ranks third in the production of the platinum group metals (PGMs) after leader South Africa and Russia.

GDI is 50% owned by Russian tycoon Vitaliy Machitskiy’s Vi Holdings, through its JSC Afromet subsidiary, and 50% by Landela Mining Venture linked to local tycoon Kudakwashe Tagwirei who is closely associated with President Emmerson Mnangagwa and his family.

After further wheeling and dealing involving Tagwirei – who is under American and British sanctions for shady deals – and his companies, Sotic International and a labyrinth of shadowy local and offshore structures, Kuvimba Mining House, 65% owned by government and 35% by ghost shareholders, now controls 50% of GDI.

The mine is located on the unique Great Dyke geological feature on a layered mafic intrusion of igneous, metal-bearing rock associated with chromium, nickel, copper, platinum, titanium, iron, vanadium, and tin.

The mineral-rich belt extends more than 550km north-east to south-west across the centre of Zimbabwe with width varying from three kilometres to 12 kilometres.

The Darwendale platinum project is estimated to hold 181.3 million tonnes of measured and indicated ore resources grading 1.60g/t of platinum and 2.93g/t of 4E, containing 17.1 million ounces (moz) of PGMs and gold.

The deposit is estimated to contain 243 tonnes of PGMs in proven and probable reserves.

The mine was supposed to be an underground operation with an annual run-of-mine ore output of 3.45 million tonnes and an annual PGM production of 290Koz in phase one.

The first box cut which provides a safe and secure entrance to the mine was initiated in January 2020. It was supposed to serve as the opening for the Mwendamberi Portal. Initial mining operations were expected to start from the northern end of the deposit and involve simultaneous production from declines 1 and 2.

The ore body is divided into five major blocks which were to be mined in phases. At full capacity, the concentration and metallurgic plant for the project was envisaged to be capable of producing up to 860Koz of PGMs treating up to 10.5Mt ore a year.

Zimbabwe, which has other running platinum mines, has been pushing since 2014 to develop the GDI project expected to showcase the country’s dramatic PGM endowments and bring close to reality its dream of a US$12 billion mining sector economy by 2023.

However, an off-centre and poor mining development method led to shaft sinking instead of open cast mining which was most suitable for the Great Dyke concession as the resource is not that deep underground.

“GDI mining developers went for shaft mining development instead of simply going with the opencast method,” one of the mining engineers involved said. “They spent a lot of money – at least US$100 million – sinking shafts and other related works instead of developing an open-pit mine.

“In the process, the shafts collapsed after the Russians were forced to hire dubious mining developers who did a shoddy job. After that, a dispute erupted on how to proceed; Russians wanted Zimbabwean shareholders to put some money on the table to fix the problem, but the locals refused as they always felt they had already contributed the resource and should not put money.

“Resultantly, misunderstandings arose and that saw the Russians pulling back or out, and Zimbabweans unable to proceed on their own. Investors, contractors, engineers, developers and workers have now pulled out. That is why the project has stalled, practically collapsing.”

Open-pit mining, also known as opencast mining, is a surface mining technique that extracts minerals from an open pit in the ground. It is the most common method used throughout the world for mineral mining and does not require extractive methods or tunnels.

This surface mining approach is used when mineral or ore deposits are found relatively close to the surface of the earth.

Open-pit mines are dug on benches that are between four and 60 metres in size, depending on the magnitude of machinery used to excavate.

The walls of most open-pit mines are dug at an angle and include steps to prevent avalanches from occurring inside the build site. The incline section of the wall is called the “batter”, and the flat part of the step is called the “bench” or “berm”.

In some cases, de-watering bores are drilled horizontally into the walls to relieve water pressure, which can destroy the walls if not properly addressed. A haul road is dug at the side of the pit to form a ramp for ore-carrying trucks to haul material to and from the mining site.

After the physical mine infrastructure has been built, production activities include drilling, blasting, excavation, loading and transporting broken ore.

Waste rock is piled up near the edge of the pit and spreads both horizontally and vertically. This is known as the “waste dump”. The waste dump is also tiered and stepped, to keep rocks from falling into other parts of the site.

Processed ore, known as “tailings”, is pumped into a settling pond until the water evaporates. These tailings ponds are often toxic due to the presence of unextracted sulfide minerals.

The company, according to information at hand, had already spent over US$100 million on geological exploration and construction of two box cuts and surface infrastructure.

Afreximbank was expected to provide about US$500 million to fund the initial mining phase.

The Centre for Natural Resource Governance (CNRG), a civil society research and advocacy group, says in its latest report after a protracted investigation it established the project is now stuck after a shaft collapse, mismanagement and shoddy workmanship.

The report shows the GDI project in Darwendale, 65 kilometres west of the capital Harare, which has the potential to become one of the world’s biggest platinum mines with capacity to reboot Zimbabwe’s collapsing economy, has stalled and now faces collapse for myriad reasons which include poor engineering works and shareholding tussles.

“Investigations by CNRG revealed that Portal 2 was left incomplete while Portal 1, though completed, collapsed at the stage of drilling the decline shafts. The collapse of Portal 1 raised a lot of questions about the competency of the engineers who designed the mine plan,” the report reads.

“The engineers carried out secondary studies on the geology of the area and concluded that the ground condition was poor and unstable hence not suitable for underground mining. Rather, opencast mining was recommended.

“With a lot of safety fears, all excavation operations to proceed with making the declines literally hit a wall. According to internal sources, delays in the project scheduling and budget creeps caused fatigue in the Russian investor who had anticipated that mining would have started by 2021. No further funds were injected into the project thereafter.”

In December 2020, the report further shows, there were signs that the momentum at the mine had slackened, and from May 2021, there were virtually no activities at the mine and operations were placed under care and maintenance.

“Contractors such as JR Goddard, KW Blasting, Dific Mining Contractors, Static Strata, Esor Construction and Intrachem withdrew and workers were retrenched. By the end of 2021, the Russians had started to strategically pull out of the mine site. Conclusively, although lack of funding was the visible cause of the failure of the project, underlying this cause were signs of mismanagement and mistrust between the Russian investors and their local partners,” reads the report.

Initially the project was owned by a consortium of Zimbabwean investors operating under the name Pen East, 30% controlled by the military’s Old Stone Investments and 20% by the state-owned Zimbabwe Mining Development Corporation, before Tagwirei bought that 50% stake, and Russian investors including VI Holdings, Rostec and Vnesheconombank. That was before further shareholder changes which resulted in the current structure.

South Africa’s Impala Platinum, which owns Zimplats, the country’s biggest platinum project, was approached to buy a stake in GDI.

However, the move failed due to GDI’s opaque shareholding structure, especially regarding Kuvimba. Landela paid US$21.5 million for a stake in GDI. There were also further mysterious payments, which included US$220 million and ZW$300 million.

The deal was not transparent.

A bankable feasibility study undertaken in 2017 by Afreximbank showed the project had the potential to contribute to Zimbabwe’s economic turnaround.