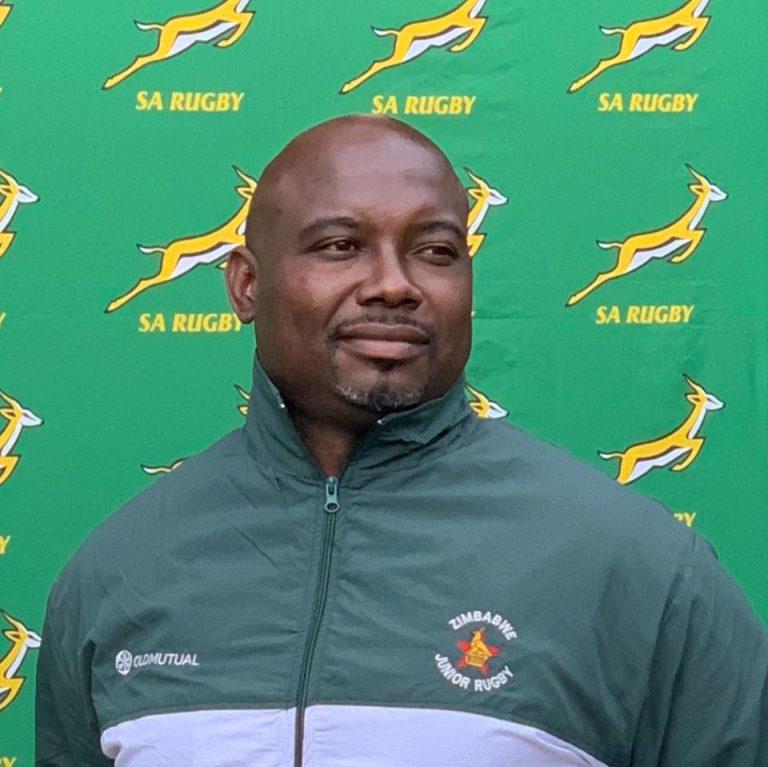 SENT to a compassionate orphanage at a young age, the biggest take-away for Shaun De Souza (pictured) from the institution was the values of impacting lives. So for De Souza rugby is more than a game.

It is an opportunity to pass down what they taught him at St Joseph’s House for Boys in Harare – helping boys grow into responsible men.

“Rugby values are actually life lessons for me,” De Souza tells The NewsHawks this week.

“Integrity, passion, discipline, and respect. These have carried me throughout my life. Sometimes I did not even realise it. But when one reflects, you find that the values play a big part.”

De Souza shed tears last week in Kenyan capital Nairobi, unable to control his emotions, when he transformed a group of Zimbabwean working-class adolescent boys into African champions, for the first time in over a decade that the country has won the Barthes Cup.

It is no mean achievement when you consider that the victorious squad for Zimbabwe in this past Under-20 African championship was largely made up of home-grown players, most of them not first-team material for their former high schools, come to think of it.

Come to think of it, too, that in the final in Nairobi last Sunday, the Young Sables defeated a Namibia side composed of elite private school boys, graduates of some of the most expensive schools this continent has to offer.

Growing up with grandparents from Arcadia and Sunningdale, Harare’s best known mixed-race neighbourhoods, and attending Moffat Primary School, life taught a young Shaun how to co-exist.

“I grew up with my grandmother in the early stages of my childhood in town then I ended up at St Joseph’s House for Boys,” De Souza says.

“I then went to Prince Edward Boys High. The legendary Prince Edward headmaster Clive Barnes was a St Joseph’s board member so he helped me get into Prince Edward. St Joseph’s became a brotherhood for me, ‘brothers from another mother’ was the mantra we stood buy. We all got to build a sense of camaraderie and a bond than has taken us thus far. At St Joseph’s, we had good facilities. They kept us busy with football, basketball, tennis, swimming, we even had a marimba band that we played on Sunday afternoons.”

44-year-old De Souza amassed Sables caps between 1999 and 2003, making his debut in Cape Town in a curtain-raiser for the Springboks’ clash with the All Blacks.

“My debut was in 1999 under the Australian coach Mark Donato against Namibia,” says De Souza.

De Souza was really quick, and at PE he broke sprinting records, of which he is incredibly proud. But athletics was that not the only code he excelled at.

“I was actually a hockey player first because that was the main winter sport at primary school so I carried on when I went to PE,” De Souza says.

“Then one day I was pulled off the hockey training field and put into rugby boots by Kevin Atkinson (later to replace the legendary Barnes as PE headmaster), who was my first rugby coach. With more matches I grew into the game and began to understand and love rugby. I was fortunate to be selected for the Zimbabwe Under-16 team in my first season of playing the game. I also played football as a goalkeeper, and volleyball. But the main sports were athletics, rugby, and basketball. At PE I was an all-rounder. From being the Young Farmers’ Chairman, basketball captain, and rugby vice-captain.”

Of course, those who arrived in high school anywhere around Harare, in those days, knew of one De Souza from Prince Edward and as much as a rival he was, we all adored him.

“For athletics, running at the National Sports Stadium was a definite highlight. I did well in the sprinting events in 400, 200, and 100 metres events and in relays. It was an honour hearing all the schools chanting my name before and during races.”

Faith also plays a role in De Souza’s personal life, and in sport. “I’m Muslim and I follow Islam,” he says.

“My religious values play a massive role in moulding me as a human being. It definitely helps on and off the field to be patient, to be calm and have good intentions with everything I do.”

Can we have more youngsters please?