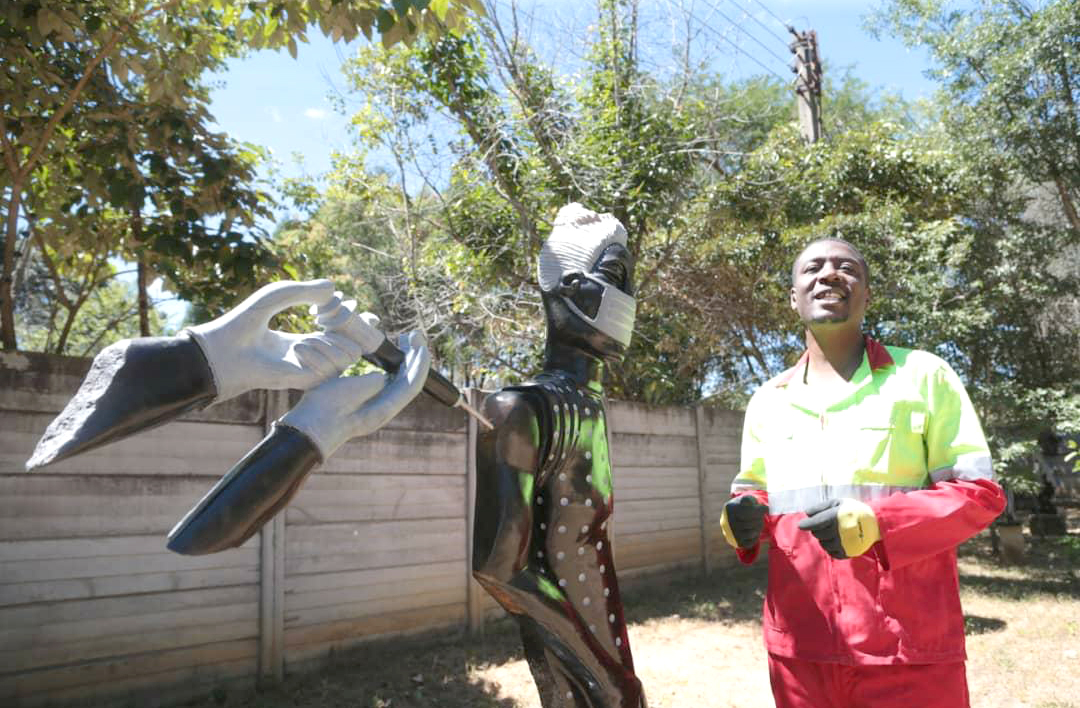 SCULPTOR David Ngwerume must have struck the right chord by carving one of his most breathtaking masterpieces to date, simply titled “Arm”.

JONATHAN MBIRIYAMVEKA
The three-dimensional sculpture, which depicts a woman getting vaccinated against Covid-19, has resonated well, not just among art lovers but also a much wider audience, in and outside Zimbabwe.

So imaginative is the piece that it has put the lawyer-cum-sculpture into the spotlight for his call for people to get vaccinated.

Prior to carving the latest sculpture, the 40-year-old Ngwerume has created an entire portfolio of art pieces placing emphasis on African renaissance, but they largely went unnoticed.

In an interview with The NewsHawks, Ngwerume, who first ventured into sculpting at the tender age of 15, spoke of how his work has evolved over the years.

“I am trying to define the moment which we as Africa are in. We are the next greatest thing in this moment in time if we align our focus towards creating an environment that shall promote wealth creation to all citizens.

“We have resources, yet poverty is riling many, so now is the time to change that.

“My work has grown through the intelligible focus I committed to by giving all my time after work to be utilised in mastering the skills in the sculpture discipline,” Ngwerume said.

For the past week, his eye-catching sculpture titled “Arm” has been trending on social media with art lovers commending Ngwerume for creatively supporting the vaccination rollout by capturing the imagination of a global audience.

“I am so grateful to note that this piece has sent a global vibe in this time of the pandemic because it captured the issue of vaccination. It captured attention because of the reality we now live with, which is calling each one of us to stay safe and to keep others safe,” he explained.

“This sculpture was inspired by the effort we as humanity are putting to try and overcome the pandemic. That’s what matters the most and we also need our Lord to guide us to a cure.”

According to Ngwerume, all his sculptures are masterpieces as he summons his creative genius in creating remarkable works of art.

He revealed that following the success of “Arm”, more people are now interested in his work and getting curious enough to look back at some of his old pieces.

“I believe people are beginning to see the realities I have always been putting in my work with a better understanding that nothing has ever changed this world into a better place than art, hence its esteem value,” he said.

“Well, Covid-19 has left travel and business in limbo. Some collectors and galleries have failed to come to buy art and exhibit abroad.”

Asked how he switches from law to sculpture, Ngwerume said he treats the two as equal professions.

“I have taken both law practice and art to be my two equal professions. Switching the two is so much fun because I would seem to find going to the other a relaxer of the other. It is living in colours, I tell you,” he said.

In the next five years, Ngwerume says, he is determined to hone his craft and emerge as the most phenomenal sculptor in the world.

“In art, value follows the tick tock of your mastery, so I hope to conquer with dignity and honour,” he said.

Ngwerume is part of Sui Generis Art Gallery in Harare where he sculpts during weekends together with two other resident artists.

On weekdays, he runs a law firm, Mukwewa and Ngwerume Law Chambers along Samora Machel Avenue in Harare. During weekends, Ngwerume makes sure he has enough time to work with stone.

He has exhibited both locally and abroad and his pieces have been displayed in galleries in Europe, North America, Asia, Australia and New Zealand.

Ngwerume’s famous works include the “Scales of Justice”, a sculpture erected in front of the Harare and Bulawayo high courts.

He has also carried out works for various organisations including the Judicial Service Commission of Zimbabwe, Office of the President and Cabinet of Zimbabwe, the Angolan government and the Democratic Republic of Congo government.

Earlier this year, Ngwerume released a work of art titled “Daring a Mustang” under a collection dubbed “Taking the Reins.” The collection was inspired by horse culture and the pieces are made of brown chrysoprase stone, a type of stone found alongside deposits of nickel.

Ngwerume is pushing for an African renaissance through his sculptures.

One has to see pieces such as “Sir”, named after the honorific address used in a number of situations in many cultures.

He also did other sculptures that explore the realities of the middle-class in society.

He also draws inspiration from current affairs, blending contemporary themes with cultural aspects.
Culture is his area of specialty, as shown by the creative genius evident in his larger-than-life sculptures.

His favourite media is springstone and opal, which he sources from Chiweshe and Guruve.

“Never be afraid of failing. Keep trying. Success rises from the ashes of failure. Making something new has always changed the world, so let’s invoke our inner strength and go forth towards that creative leap and conquer the world,” he says.

We give all glory to God says Pastor Charamba