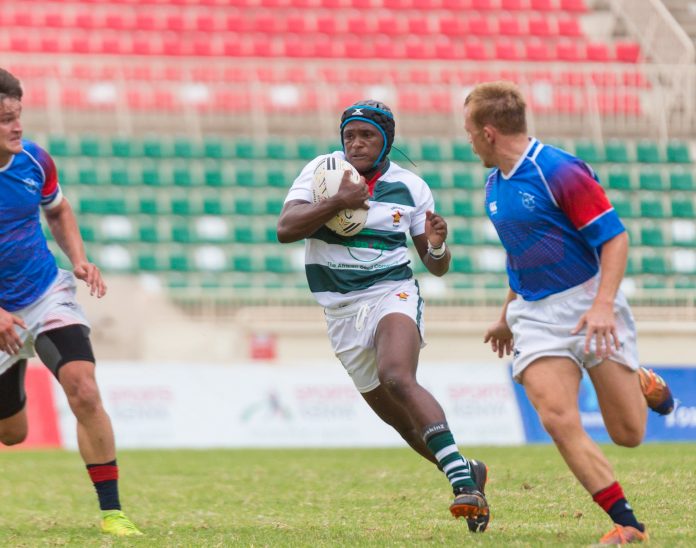 Tavonga Ablant tries to weave past two Namibia players in the youth Africa Cup final in Nairobi in April.

YOUNG Zimbabwean rugby star Tavonga Ablant could lose his scholarship opportunity to the United States in additon to a lengthy ban for doping after he failed a drug test on a tour of Canada in August, The NewsHawks can reveal.

The 20-year-old prodigy, who hails from Mbare, is said to have tested positive for steroids in August whilst with the Zimbabwe Under-20 team at the Canada International Rugby Series, a once-off tournament designed as part of preperations for next year’s Junior World Trophy.

The Zimbabwean side qualified for the Junior World Trophy after being crowned African champions in Kenya in April, where Ablant was one of the Young Sables’ star performers.

The sport’s global governing body, World Rugby, is expected to make a statement on the matter after receiving a report from Ablant.

The explosive utility back’s problems could be compounded if found that he ingested the substance knowingly. Multiple sources have told The NewsHawks that Ablant could have done so on the advice of a local sports agency (name provided) that manages him, so that he could bulk up and secure the university scholarship, which he was almost certain to get if he was in the right physcal condition.

Ablant is believed to have taken the banned performance-enhancing drug when he and two other triumphant Young Sables, fresh from their success in Kenya, were belatedly added to Zimbabwe’s senior side which was playing in the Currie Cup First Division in South Africa.

Ablant however sustained a hamstring injury towards the end of the tournament and missed Zimbabwe’s last two matches.

“He was supposed to go to the States, but now it’s no longer possible with this situation,” a source within rugby circles said.

“When they went to Canada, they went through an anti-doping process by WADA (World Anti-Doping Agency) and from what I hear, I think he had steroids in his blood system. I fear, if he took the drugs knowingly, that he could have done it under pressure to perform because he was getting injuries and all that. And somebody advised him that it would make him stronger. It could be a three to four-year ban. But he is also very academic, that child, a top student. He comes from an underprevileged background, it’s horrible if this is going to jeapardise everything now. I can only imagine his mental state at the moment.”

Ablant learnt his rugby at the striving Mbare Academy in the Zimbabwean capital city and got his first breakthrough when he was awarded a sports bursary by Hillcrest College in Mutare. He then won another scholarship to Maritzburg College in South Africa, where he completed his senior school.