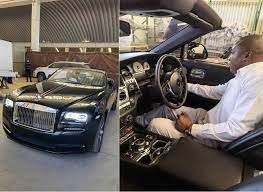 THE son of the late Zimbabwean business tycoon Roger Boka, Mathew, says the Rolls-Royce which went viral on social media over the weekend after President Emmerson Mnangagwa’s son Sean was photographed in it, belongs to him and is not for sale.

When the pictures initially emerged, word was that Sean, a captain in the Zimbabwe National Army attached to the yellow-bereted Presidential Guards, had bought the vehicle which is in a bonded warehouse at the Boka Auction Floors.

Sean and those around him however quickly denied he had bought the car, at a time there was hectic communication through phone calls and WhatsApp among the First Family and its associates.

It then emerged that Sakupwanya had bought the car, paying an initial deposit of US$140 000 and pledging to pay an additional US$135 000 to fully own the car.

The NewsHawks was told Mathew, the executive chairperson of Boka Tobacco Floors, imported the car for personal use from the United Kingdom.

Sources however say he later entered into an arrangement with Sakupwanya who was eager to buy the car, showing his commitment by paying US$140 000.

However, quizzed about the car on Friday, Mathew said he owns it.

“I can categorically state that it’s my car. It’s my vehicle, I imported it, but it’s in a bonded warehouse,” he said.

Asked where he had bought the car from, he said: “Certainly not South Africa.”

Pressed further and asked to confirm if it was indeed bought in UK, he said: “Well, if your sources tell you that, then that’s correct.”

On whether he sold the car to Sean, he said: “It’s my car. It’s not on sale. Sean came the other day to the auction floors on other business which had nothing to do with the car, but he saw the car and liked it. He asked if he could view it and take pictures, just like any person who would have seen something nice,” Mathew said.

“It’s not his and I don’t want to talk too much about this issue because I am a private person. I don’t talk much to the media and this is not even a big issue.”

Told that our interest was about public accountability in relation to the President’s son, since his father is the leader of the country and not about him and that The NewsHawks has no problem with people driving expensive cars, Mathew said he understood the interest, but did not want to discuss the matter in detail.

Since Mnangagwa ascended to power on the back of a military coup in November 2017, his sons’ fortunes have risen sharply.

They are now in business on various fronts and also working on projects with many politically connected persons, including business tycoon Kuda Tagwirei, who doubles as the President’s adviser.

Controversial pipeline deal to balloon to US$4 billion

Zimbabweans caught up in Afghanistan turmoil