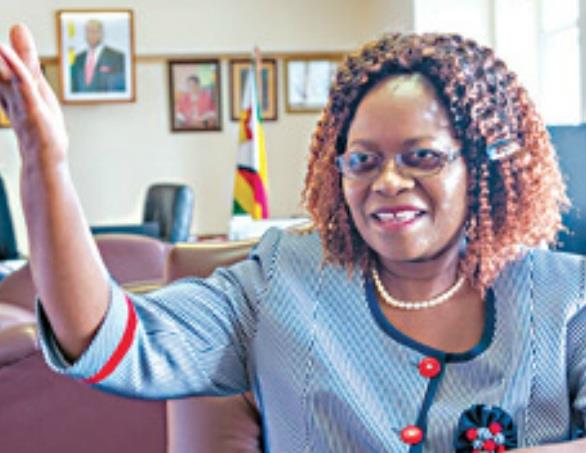 REDCLIFF Municipality is in the eye of a storm after it failed to reverse a murky arrangement to acquire posh motor vehicles and cellphones for senior managers in a swap deal for land with a Chinese company despite having been red-flagged by Auditor-General Mildred Chiri (pictured).

An investigation by The NewsHawks also established that the municipality eventually gave the company more valuable land after issuing invoices above quoted prices.

Chiri in her 2021 audit report for local authorities highlighted that the arrangement was irregular as it violated procurement regulations.

She noted that Redcliff Municipality engaged Livetouch Investments to supply vehicles and earthmoving machines in exchange for land measuring 21 hectares which the company could sell as residential stands.

The deal in total amounted to US$847 962 and Chiri said it was scandalous.

“The Municipality entered into an irregular agreement with Livetouch Investments for the supply of vehicles and equipment valued at US$847 962. The equipment was full consideration in exchange for 21 hectares of land by Council to Livetouch investments. I noted that the agreement with Livetouch was entered into without going to tender, contrary to the provisions of the Public Procurement and Disposal of Assets Act [Chapter 22:23]. Section 2.2 to 2.4.2 of the agreement provided that Livetouch would deliver the equipment and vehicles,” said Chiri.

The purchases not only flouted the procurement regulations but also violated a government directive issued on 20 March 2018 regarding conditions of service vehicles for executive management of local authorities, independent commissions, state enterprises and parastatals (SEPs) which stated that applications to buy such cars should be done through their line ministry for onward scrutiny by the Office of the President and Cabinet (OPC) and approval by Treasury prior to the confirmation of any purchase order.

Investigations by The NewsHawks at Redcliff Municipality revealed that despite the Auditor-General’s red flag on the land swaps, the local authority has not rectified the bungling by way of cancelling the deal and making a re-payment into the estate funds account for the lost land as specified by section 300 of the Urban Councils Act [Chapter 29:15].

Top council officials are in possession of the vehicles.

Town clerk Gilson Chakanyuka, who gifted himself a Toyota Fortuner from the land deal, only stopped using the vehicle last month when he was involved in an accident on his way from Gweru.

The vehicle was badly damaged in the accident and is a write-off.

Section 2.7 of the agreement between Redcliff and Livetouch Investments provided that:
“The purchaser shall be responsible for any cost incidental or otherwise which is not catered for in the purchase price . . .”

The NewsHawks noted that the town clerk’s Toyota Fortuner as well as a Toyota Quantum vehicle were later invoiced different amounts in excess of the agreed values as per the purchase agreement.

The Toyota Quantum on the purchase agreement was invoiced US$41 034 which later shot up to US$50 465 on actual payment made, showing a US$9 431 variance.

The NewsHawks also found out that a company called Storey Marketing Hardware, which supplies protective clothing, wrote a letter to the municipality requesting the amounts owed to it to be paid by allocation of stands, and the local authority agreed.

The value of the transaction was ZW$537 113 and a low-density residential stand number 3929 measuring 1 300 square metres was allocated.

The municipality also paid a company called Classic Mobile on 31 August 2021 using stands with an offer letter dated 26 October 2020 valued at US$13 348 for the mobile phones the dormitory town had acquired.

No repayments have been made to date to the estates fund account for the noted transactions. The ministry of Local Government and Public Works, through a letter dated 21 September 2015, warned the municipality to desist from utilising land for recurrent expenditure but investigations confirm that the local authority ignored the word of caution.

Redcliff mayor Clayton Masiyatswa defended the failure by the municipality to rectify the irregular deals and said as far as he was concerned, what they did served the purpose of developing the municipality.

“Yes, everything was done above board and the land sale was done during the hyper-inflation period and what we did during that period was in the best interest of our town,” he said.
Town clerk Chakanyuka was ducking and diving when contacted for comment.

Responding via WhatsApp message, he said: “Please can you write an official letter with your questions so that I also respond to you in a formal manner,” he said.

However, when the written questions were sent to him, he did not respond.
An official at Redcliff Municipality told The NewsHawks that corruption at the local authority was causing a decline in service delivery in the dormitory town.

“These irregularities and clearly corrupt dealings have been the main cause of poor service delivery in Redcliff. We have endured years of lack of reliable water supply; at the best of times we would only receive water for two hours in the morning (5 to 7 am). But now it’s nearly a year in Redcliff suburb without anything.

“Street lights go unfixed, refuse remains uncollected, and roads that were not rehabilitated through ERRP2 [Emergency Recovery and Reconstruction Project] are a danger to our vehicles, whilst some homes have burnt to the ground due to inadequate fire services.

“Yet, the local authority is able to mortgage land mainly for luxury cars and mobile phones for top officials — which they even have priority over service vehicles — whilst totally ignoring the plight of residents.

“There is need for accountability on how our land ended up being swapped for cars and mobile phones, and those involved brought to book. Our land is our heritage, and it cannot be simply disposed of for such things as cars and phones,” said the source.