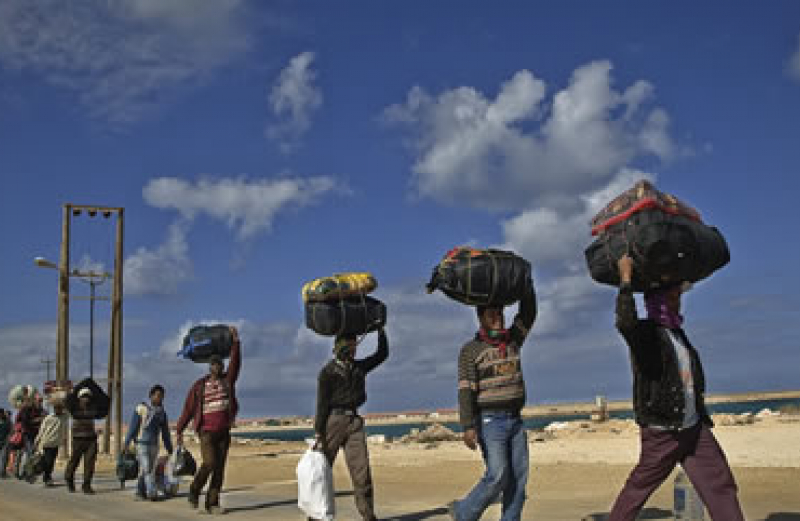 African migration is being driven by a varied combination of push and pull factors in each country. The primary push factors include conflict , repressive governance and limited economic opportunities .

Most African migration remains within the continent, around 21 million documented Africans have migrated to the next country within Africa.

Human rights are often violated in cases of labour migration and education, diaspora engagement, internally displaced people hence the need for policy recommendations for the better meant of Africa.

Gender is a  primary means of social distinction that interacts with other categories such as age, class, ethnicity, nationality, race, handicap, and sexual orientation. The causes of migration have varied effects on men and women.

Whether traveling between rural and urban areas, intra-regionally, or worldwide, women and men are affected in different ways.

Labour markets are frequently highly segregated, and gendered discourses, practices, and legislation determining who has the right to migrate and how can limit or facilitate cross-border movement between men and women. Migration may alter gender roles within families and the community, which may have an effect on gendered and sexual identities. This article is solemnly designed to give policy recommendations on gender and migration.

The African Union Agenda 2030 outlines development goals and objectives related to migration and gender, and it acknowledges that women’s migration is likely to increase. Women’s rights and gender equality are central to African legislation and policies, and they are well integrated into the development agenda in terms of socioeconomic challenges and proposals.

The current migration system in Africa does not take gendered aspects of migration into account, and thus fails to consider gender specific migration drivers, trends, and vulnerabilities. The lack of gender-disaggregated data makes the specifics of migrant women’s labour-force participation difficult.

International organisations should assist through technical expects and capacity building like how the International Organization for Migration (IOM) has established programs to help African countries avoid the pitfalls of migration. They facilitated the demobilization of child soldiers in Angola, allowing over 5000 to return home.

In Rwanda, the IOM helped migrants who had been displaced in Italy during the conflict to reintegrate. Several programs were also established to assist women and children in Uganda who had been displaced by the Sudanese Resistance Army, as well as to provide them with protection and assistance against trafficking.

Africa must have migration governance where the international system should make efforts to deal with the cases of gender insensitivity during the processes of migration.

This then helps provide guidance on migration governance on different thematic areas and also complies with international standards and law securing migrant rights. In these guiding principles, states should aim to give aid to the socio-economic well-being of migrants be it women or men.

Migration is inevitable, and needs to be better governed in an integrated manner through comprehensive, human-rights based and gender-responsive national migration strategies and policies.

This then includes the capacity of governance to formulate and implement sound migration policies that are gender sensitive. In this respective regard, states needs to comply with international standards and law to secure migrants’ rights.

Respect, protect and meet the rights of all persons, regardless of their migration status, nationality, gender, race or ethnic origin, including through countering xenophobia, racism and discrimination, securing their access to protection, and criminalising and prosecuting smugglers and traffickers.

Africa must provide all migrants with access to justice and legal redress whilst identifying and assisting vulnerable migrants and displaced persons through child-oriented, gender- sensitive and culturally appropriate approaches.

On labour migration and education,  women , men , boys and girls migrate for labour and educational reasons but there are no gender sensitive policies at regional and national level.

Labour migration is a historical and contemporary fact in Africa that has a significant impact on the economics and society of African States.

For both the States of origin and destination, regular, transparent, all-encompassing, and gender-responsive labour migration policies, regulations, and institutions can have a positive impact.

According to Agenda 2063, among other things, investing in human resources’ productive potential can help end poverty and this concurs with the AU Free Movement of Persons Protocol and the African passport are flagship projects of Agenda 2063, which also calls for the abolishment of visa requirements for all African citizens in all African countries whilst spurring students and labour mobility.

In this regard on labour migration and education, states should ensure that national laws, including constitutional, administrative and civil law and labour codes, provide women migrant workers, in particular domestic workers, with the same rights and protection that are extended to all workers.

To add more to this, states must Establish effective complaint mechanisms and ensure that migrants, especially migrant women, have recourse to enforce, timely and affordable remedies. Whilst also ensuring that migrant workers are able to make complaints against their employers or others, including on grounds of sexual harassment in the workplace, and have access to remedies for unpaid wages and compensation for violations of labour rights, without fear of reprisals and expulsion.

Policy recommendation is a great need on diaspora engagement. Migrants often maintain a web of connection with their homestead creating beneficial feedback effect such as transfer of remittances, knowledge skills, technology as well as joint business ventures so in this regard, states needs to create conducive political environment for diaspora engagement.

In 2012, the first Global African Diaspora Summit was held in South Africa, at which a key Declaration and five “legacy projects” were adopted: the production of a Skills Database of African Professionals in the Diaspora but despite these initiatives, there is a dearth of national policies and strategic plans on Diaspora engagement, with existing policies rarely harmonised within regional and continental frameworks.

Establish Diaspora focal points or agencies to manage Diaspora affairs and dual citizenship programmes whilst encouraging entities such as the European Union (EU)/European Commission (EC), AU, ILO and IOM, and other organisations and their respective projects, to assist African States and their Diaspora agencies or focal points to develop effective Diaspora engagement policies and actions.

In terms of gender, boarder governance,  in Africa, as in other parts of the world, border management systems are coming under increasing pressure from large flows of persons, including irregular and mixed flows.

Specific challenges to border management mechanisms and personnel include building capacities to distinguish between persons having legitimate versus non-legitimate reasons for entry and/or stay.

Women in the world have been subject to attacks linked with international terrorist networks and human trafficking. It is important that States meet their humanitarian obligations to refugees of both gender and others eligible for protection, and facilitate cross border trade and mobility, while maintaining the security of their borders.

Consequently, the strengthening of border management systems in terms of technology. There has to be implementation of rules and technical procedures relating to movement of goods and persons, protection of legal activities at the boarder whilst preventing the illegal activities and as well as human and national insecurities.

The trend towards the securitisation of migration and borders should not engender the closing of borders and hamper integration efforts in Africa therefore member States need to cooperate in the delimitation and demarcation of borders, as well as in the development of cross border procedures and initiatives which facilitate cross-border trade, mobility and development, in order to achieve Agenda 2063’ vision of an integrated Africa.

Lastly, states needs to provide adequate and gender-responsive information about the requirements, gender diverse challenges and opportunities of migration.

To add more both men and men tend to be victims of migrant smuggling and as well as human trafficking. A growing proportion of migrants are moving irregularly, due to a number of factors, including the need for international protection and increased barriers to regular migration and end up having their rights being violated and this ends up violating the international and national stability of states.

Consequently, government responses and policies to smuggling should at all stages take account of migrants’ human rights, and to the extent possible, seek to respond to the motivations behind this form of irregular migration.

We would recommend that states should strengthen the Legal Framework by ratifying the Protocol Against the Smuggling of Migrants by Land, Sea and Air, Supplementing the United Nations Convention against Transnational Organized Crime, 2000 and incorporate its provisions into domestic law.

In the case of refugees and asylum seekers, there is need for refugee protection because it is vital.

The policy recommendation would be that states should establish effective and fair procedures for individualised refugee status determination, including granting refugees meaningful access to such procedures, which should entail accessible, gender-responsive and culturally appropriate services and information whilst also safeguarding the human security and gender-differentiated needs of refugees (physical, material, legal and health), especially in the context of refugee camps and with particular attention to the needs of vulnerable groups (women, children, disabled, and older people), while at the same time ensuring that refugees are aware of national laws, regulations and their obligations to abide by these.

In conclusion migration is gendered and therefore there is a need for African states to pay a huge attention on the gender issues and how human rights are being violated and protected when issues of migration come in discussion.

Hence the need for policy recommendations. Today the IDP population in Africa outnumbers the refugee population by a wide margin, thereby creating the need for comprehensive and concerted efforts to address the issue of internal displacement, including through early warning systems, to implement timely measures to prevent displacement.

Displacement of populations within a country may occur as a result of terrorism, conflict, natural disasters or climatic conditions, and may require transnational cooperation to prevent or address and therefore the recommendation would be that governments should prevent conditions on their territory that may lead to displacement, including by protecting human rights and international humanitarian law, as well as developing early warning and rapid response mechanisms to protect populations under threat.

*About the writers: Laita and Jongwe are undergrad students at the Africa University, Zimbabwe