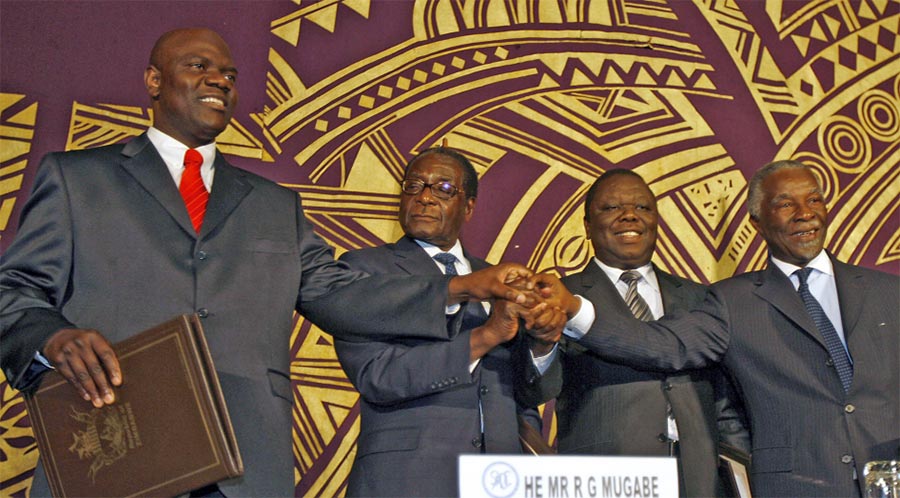 THE Oxford English dictionary defines dialogue as simply a conversation between two or more persons.

The Centre for International Dialogue on Peace Building and State Building, on the other hand, offers a more elaborate and qualified definition of political dialogue as a wide range of activities, including high-level negotiations, mediation and community attempts at reconciliation.

This, among other things, encompasses four distinct categories, namely: summit dialogues that are heavily driven by those in the top echelons of leadership; track two dialogues initiated by civil society; dialogues that are implicit in planning and governance activities; and multi-level dialogues that seek to involve all levels of the society.

Thus, in contemporary times, historic conflict resolution events that immediately come to mind are the Treaty of Versailles of 1919 which signaled the end of the First World War (WWI) and the Good Friday Agreement of 1997, which ended the sectarian violence in Northern Ireland.

Coming closer home, we had the negotiated revolution at the Lancaster House Constitutional Conference in 1979 and other post-independence conflict resolution dialogical platforms which shall become more apparent as this essay unfolds.

This opinion piece has been influenced by the latest growing vociferous chorus for political dialogue emanating from the political elites in the judicially constructed MDC-T and from the governing party, Zanu PF.

The raison d’être for this latest cry for dialogue is the fallacious and naive attempt to misconstrue a summit dialogue of the political elites as the antidote and panacea to Zimbabwe’s 20-year-old socio-economic and political malaise and crisis.

Accordingly, this opinion piece will adopt a critical genealogical approach and, inter alia, argue and expose the fallacy and bankruptcy of this proposition by exposing the fault lines of previous horizontal top-down leadership and elite-driven power-sharing pacts which will similarly befall this latest proposition.

Genealogy of elite pacts
Top-down, leadership-heavy and elite-driven dialogue has been an integral part of the Zimbabwean political ecosystem since the conception of the post-colonial independent state of Zimbabwe.

Thus, several scholars have argued that Zimbabwe experienced a negotiated revolution in the conference chambers of Lancaster House in 1979.

At the Lancaster House Conference, there were buy-ins and buy-outs between the nationalist elites under the banner of the Patriotic Front and the Rhodesian Front as represented by right wing white elites such as Ian Smith and General Peter Walls.

Zimbabwe became a negotiated revolution because neither the nationalist guerillas nor the minority settlerist Rhodesian Front could claim outright victory in the 16-year-old civil war despite the fact that Mugabe wanted a Fidel Castro or Samora Machel style of outright military victory and annihilation of the colonial settler government.

The distinct feature of this elite transition into post-colonial Zimbabwe was that the dialogue process at Lancaster House was underwritten by Frontline States such as Zambia, Mozambique and Tanzania, and also by the United Kingdom as the colonial master and, indeed, the United States.

Suffice it to say, it is a truism that at the Lancaster House conference the African nationalists negotiated themselves into power and, conversely, the Rhodesian right wingers negotiated themselves out of power. Thus, the negotiated revolution subsequently and inevitably spawned an elite transition in the form of the Government of National Unity from 1980 to 1985.

The fragilities and the defectiveness of reconstructing a monolithic post-colonial Zimbabwean state were exposed between the years 1982 to 1987.

The country witnessed a concerted effort by the Shona-dominated government of Robert Mugabe to create an ethnocracy characterised by a state-sanctioned ethno-nationalism.

This resulted in egregious ethnocide of the Ndebele tribe which were predominantly the social and political support base of Joshua Nkomo and his political party PF Zapu.

This period of state-sanctioned pseudo-ethnic apartheid and ethnocentrism against the Ndebele people and supporters of Joshua Nkomo was known as the Gukurahundi.

During this period of wanton discriminate, genocidal and ethnocidal attacks in the Matabeleland and Midlands region cost the lives of nearly 20 000 innocent civilians who were extra-judicially tortured and killed by Mugabe`s North Korean-trained paramilitary crack team known as the 5th Brigade.

Against this backdrop of state-sanctioned ethnocide and ethno-nationalism targeted at Nkomo’s social and political base, the international community regrettably turned a blind eye and gave deaf ear to the young Zimbabwean nation.

Nkomo had limited options other than negotiation for the cessation of hostilities by the Mugabe government from a position of weakness.

Thus, between 1985 and 1987, PF Zapu of Joshua Nkomo and Zanu PF engaged in a process of elite co-option through an elite pact which resulted in the famous peacocracy of 1987 called the Unity Accord.

In 2009, Zimbabwe was again confronted with another elite-driven peacocracy. In the aftermath of a bloody inconclusive June 2008 presidential election run-off, the three main political protagonists — Robert Mugabe, Morgan Tsvangirai and Arthur Mutambara —- were involved in another elite-driven preventative diplomacy, underwritten by South Adrica’s president Thabo Mbeki and the Sadc.

Consequently, the 2009 GNU re-empowered the Zanu PF elites and re-marginalised the pro-democratic forces, especially the rank and file social and political support base of Tsvangirai, which had borne the brunt of Zanu PF’s murderous banditry during the ill-fated June 2008 presidential run-off.

Thus, the 2009 GNU peacocracy, like its predecessor the 1987 Unity Accord, dismally failed to address issues relating to distributive justice and transitional justice for the victims of state-sanctioned injustices.

Suffice it to say, the Achilles heel of the GNU, particularly from the perspective of the MDC-T, was its failure to deliver transformative and progressive electoral, security, socio-economic and politico reforms.

Instead, some of the senior MDC-T officials in the GNU became part and parcel of the elite-driven clientelism and patronage bent on personal primitive accumulation.

Hence, they were involved in some self-aggrandising corrupt practices.

Whilst the hitherto pro-democratic elites in both MDCs were busy enjoying the comforts and privileges of government officialdom, they inevitably lost track of the reform agenda while Zanu PF, on the other hand, was busy regrouping and reorganising its political and electoral juggernaut for the 2013 elections.

Shock doctrine of elite co-option
We foreground this analysis on the historical trajectories of elite pacts and co-option within the body politic of Zimbabwe since 1980.

This is in order to fully contextualise, critique, and expose the shortcomings of this latest vociferous cry for dialogue coming from political elites in Zimbabwe.

On 10 February 2021, Douglas Mwonzora, the controversial leader of the judicially modified MDC-T, made an impassioned plea for dialogue, which he hopes to contain a veneer of inclusivity and some fragments of un-conditionality.

Nonetheless, dialogue-fatigued Zimbabweans were quick to remind both Mwonzora and Mnangagwa that they already had in their possession a sterile two-year-old dialogue platform of Polad which they should proceed with.

In his Twitter clip, Mwonzora enumerated all the three-post-independence elite transitions, pacts and co-options in an attempt to buttress his latest promiscuous political opportunism.

However, unlike the negotiated revolution of the Lancaster House Conference, or the peacocracies of 1987 and 2009, where the main protagonists had the socio-political capital to leverage the demands of their constituencies and stakeholders, the current proposition by the judicially constructed MDC-T glaringly and offensively lacks these ingredients.

Mwonzora was never a presidential candidate in the disputed 2018 general election.

Neither did his MDC-T outfit protest or demonstrate that it had any outstanding grievances or contestations with the ruling Zanu PF.

In fact, on the contrary they have been acting as the puppets of Zanu PF government, through rubber stamping and endorsing every omission or commission of Zanu PF.

Furthermore, judging by some utterances coming from the hierarchy of the MDC-T, it only shows that they are pushing for an elite-driven accommodationist  Government of National Unity to rekindle elite benefits enjoyed during the 2009 GNU days.

There is no doubt that the Zanu PF government is warming up and entertaining the prospects of this pseudo-Government of National Unity.

This is despite public utterances from senior Zanu PF establishmentarians disputing such notions.

This begs the question why a party that boasts of having a two-thirds majority in the National Assembly and has control of the executive, central government and local government would want a GNU or continue with wild goose chases of dialogue.

The simple answer is that, since it won the 2018 disputed elections, the Zanu PF government has tragically failed to deliver on the socio-economic front.

Socio-economic conditions have deteriorated significantly since the November 2017 coup that ousted Robert Mugabe.

Coupled with this is the fact that the democratic space continues to shrink whilst civil liberties and human rights have been tragically eroded.

Accordingly, it is these diseconomies of the dearth of performance legitimacy from the Zanu PF government which are acting as a push factor for them to manufacture an easy way out of this socio-economic and political crisis.

This is also driven by emotional and nostalgic beliefs that a patched-up GNU might deliver the same short-lived socio-economic stability and miracles that were produced by the 2009 GNU.

Moreover, the Zanu PF government fortuitously perceives that a patched-up GNU might enable them to circumvent the endemic demands to institute socio-economic and political reforms.

A case for the national transitional authority

The diseconomies and blowbacks that have pervaded and perturbed all the three historic high-level summit dialogues in Zimbabwe invariably draw us to the proposition which was articulated by the director of Sapes Trust, Ibbo Mandaza, that of the urgent need to come up with a three-year National Transitional Authority.

This proposition has also been aptly articulated by the director of Osisa, Siphosami Malunga.

Both Mandaza and Malunga argue for a Codesa-type of dialogue platform that will act as a means to an end, rather than an end in itself.

Mandaza and Malunga find convergence in that a transitional authority would create a soft landing for the Chimurenga aristocrats.

That is, the securocrats and the Zanu PF mandarins would be cajoled and persuaded to leave power on condition of immunity from prosecution, whilst still entitled to retain all their ill-gotten wealth and patrimonial profits.

This win-win situation will most likely entice the ruling Zanu PF elites to warm up to the idea of the NTA.

There is no doubt that the country`s social contract, moral contract and fiscal contract have been bastardised, dislocated and destroyed over the last 20 years.

The 2009 GNU was unable to reset and reinvigorate both the ethical fibre of constitutional democracy, rule of law, the upholding of human rights and civil liberties, and the moral fibre of good governance, respect for property rights and fiscal discipline.

Undoubtedly, arguments for a three-year NTA are rationally persuasive and would recapture the wounded soul of the nation, whilst at the same time resetting the social, moral and fiscal contracts of the country.

Thus, an NTA rather than an elite top-heavy leadership dialogue would, in the circumstances, be the best possible platform for providing a roadmap out of this 20-year-old socio-economic and political governance crisis.

Central banks and the art of communication