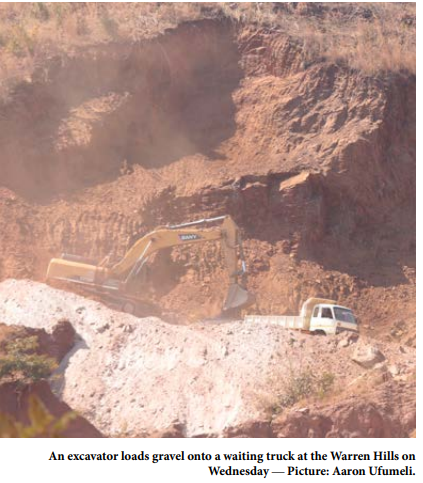 IT is a Tuesday morning, at the top of a section of Warren Park’s rolling hills. One is welcomed by the singing of various people, some as individuals and others in small groups, and all kinds of prayers. In these times of Covid-19, where churches and other gatherings are banned, people have resorted to finding places to pray in the hills and mountains.

All sorts of people come here: Some are silently meditating, while others are shouting prayers at the top of their voices, with some speaking in strange tongues for long periods. At the base of the hills in Warren Park 1, the residents in nearby houses often hear the hilltop prayers. Joyce Chiname (45) is at home doing her chores.

A street vendor passes by and she stops her to buy tomatoes while shouting at her two minor children who had crossed the road to play. Directly in front of her house, there is a deep pit left by City of Harare workers when they extracted gravel.

The pit is a constant reminder of an unfortunate incident that befell her tenant three years ago. The tenant’s seven-year-old baby girl went missing, only to be found a week later floating in the water-filled gravel pit in front of their house.

“When I look at these pits, it opens up old wounds. My tenant’s daughter was playing with other kids and when the others returned home, she did not come with them,” Chiname says, with tears welling up in her eyes.

“We reported the case to the police when the child went missing and they only told us to wait for 48 hours. Even when we found her, we told the DA (district administrator) about these pits, but nothing has been done,” she added.

For years, the City of Harare and construction companies have been extracting gravel for the rehabilitation and construction of roads from Warren Hills, destroying large sections of the once picturesque landscape.

“At this rate, we could be telling our children that ‘once upon a time’ there were hills in this place,” Milton Moyo, a local resident, said.

“Every single day, we are seeing truck after truck loading gravel from the area. Right from the start of the hills, just after the TelOne offices along Bulawayo Road, to Mereki Shopping Centre, they are destroying the hills. These trucks are also destroying the roads by causing potholes and yet the companies don’t invest in fixing the roads.

“Sometimes I think they are taking advantage of us because we are in highdensity suburbs. Why don’t they destroy the hills in Chishawasha, Glen Lorne or Borrowdale Brooke?”

For residents living at the foot of the hills, however, there is a greater concern of lifeand-death proportions.

Mellissa Magarasadza, whose house is 100 metres away from a very deep gravel pit, said she regrets moving to the area because she is constantly worried about the welfare of her minor children.

“We are new here, but I am living in fear because I have to constantly check on my children. What frustrates me the most is that they are continuing to create more pits without filling the old ones,” she said, pointing to an earthmover that was manoeuvering its way up the hill.

Trucks can also be seen taking turns to carry gravel. It happens all day long, Mugarasadza points out.

The result has been that, even from a distance, one can easily see the ugly scars on the hills. City of Harare spokesperson Michael Chideme confirmed that the local authority has been extracting gravel for road construction from Warren Park.

“I suggested that the works department erect a fence around the pits. They (the pits) are very deep and I had to stop them from continuing because they were advancing towards the houses. They then went to another side,” Mhetu said.

He also said the City of Harare should be environmentally friendly in its approach by filling up the pits, among other measures.

“When a house is so close to a very deep pit like that, it’s no longer safe. That’s my concern,” he said.

However, besides the safety of people, especially children, the extraction of gravel also has environmental effects. Other than their safety, residents again complained about noise pollution from the trucks, earthmovers and bulldozers, as well as explosives used to blast rock.

Despite all these effects, Mhetu said he believes when the City of Harare settled for extracting gravel, it had complied with all Ema requirements.

“We haven’t received any communication or complaint from Ema seeking the punishment of the City of Harare, so it shows they are complying with the Ema Act,” he said.

Mhetu however said there was no excuse for the failure to fill the gaping pits. Ema’s senior environmental education and publicity officer for Harare metropolitan province, Batsirai Sibanda, said the agency is aware of the extraction of gravel in Warren Park, adding the local authority is not committing an offence.

“These borrow pits have been in existence before Ema was established, although an environmental management plan was submitted by Harare City Council to the agency (Ema) and we are constantly monitoring the gravel extraction activities taking place,” Sibanda said.

In an article published by Ubuntu Times, environmentalists complained that soil from dug up areas below and on top of Warren Hills is being washed into Lake Chivero, contributing to siltation.

“The gravel extraction taking place on this site is not on wetlands. Land degradation that takes place on wetlands is the one that primarily affects our water sources,” she said.

The extraction of gravel is likely to continue going forward. “Let’s see what this area will look like after 20 to 30 years. I am sure these hills will be non-existent or badly scarred such that they will become a real eyesore. And as long as the pits are not filled, there will be many broken limbs or deaths caused by this extraction,” warned Moyo, the local resident.

“It pains my heart and this view is widely shared.”

Related Topics:GravelWarren Hills
Up Next