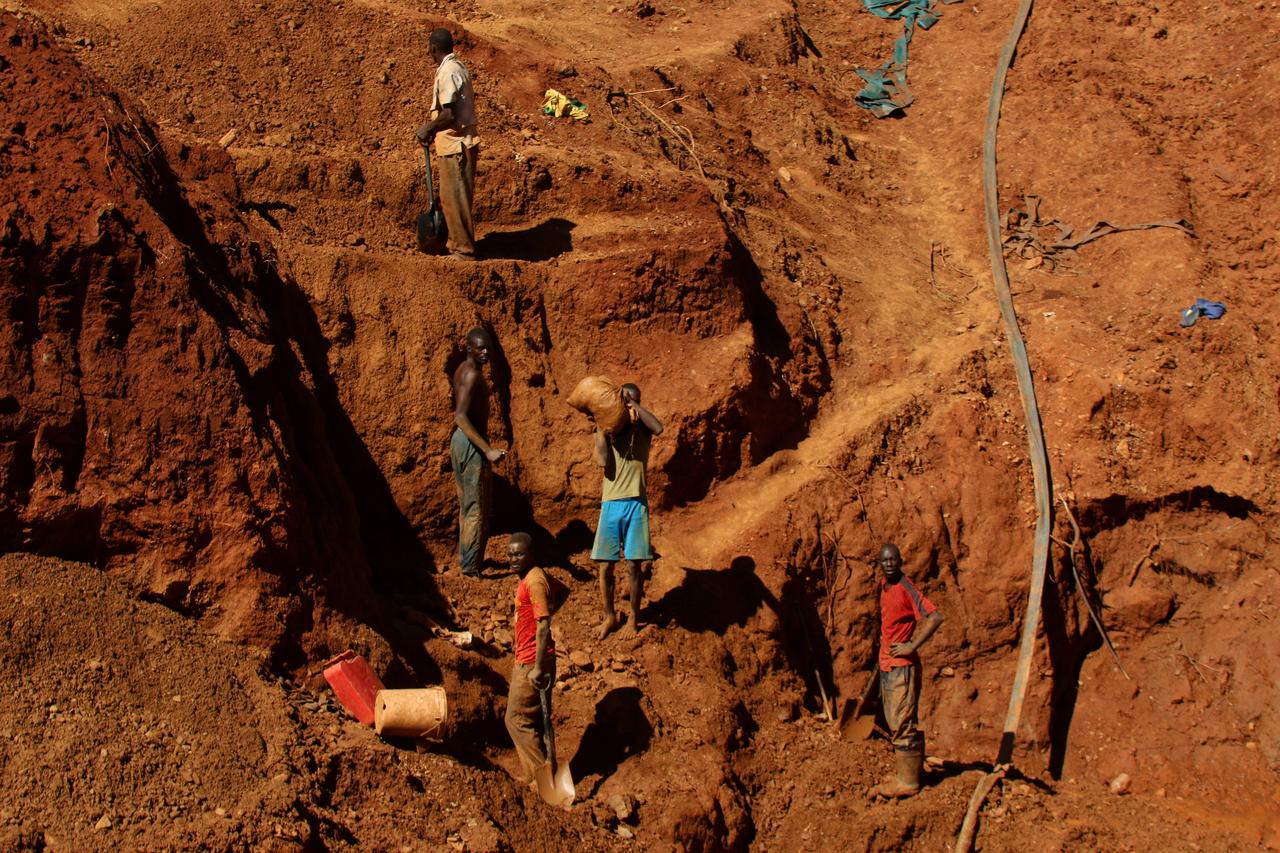 PENHALONGA, a mining settlement in Mutasa District of Manicaland province about 20 kilometres north of Mutare in a valley where the Tsambe and Imbeza rivers meet the Mutare River, has become a battleground for artisanal miners and politicians seeking to grab Redwing Mine which was owned by Metallon Corporation.

A report done last year by the Centre for Natural Resource Governance (CNRG), which monitors mining and related issues, says politically connected individuals and political actors were scrambling for gold in the area now teeming with artisanal miners digging around haphazardly, with devastating environmental consequences.

The artisanal miners are said to have been brought in by syndicates linked to ruling elites who are accelerating environmental degradation in the area. The report says the environmental regulatory authority, Environmental Management Agency (Ema), has not taken action, raising suspicion of the involvement of very powerful or politically well-connected individuals in the unfolding environmental crisis in the once pristine town.

CNRG says Penhalonga’s crisis is intertwined with the placement of Redwing Mine under judicial management by Metallon in 2018, citing viability challenges owing to foreign currency shortages.

The forex shortages were blamed on government regulations which stipulated that gold-mining companies sell the mineral to the state-owned Fidelity Printers and Refiners at an officially determined price.

The Reserve Bank of Zimbabwe (RBZ) allowed companies to retain a portion of their export earnings, while the rest was paid in local currency using the Real-Time Gross Settlement (RTGS) system.
Metallon claimed it was sending gold to the RBZ, but it was unable to repatriate the proceeds. The company was hit hard and began to sell its assets; firstly it was Arcturus Mine, then Shamva Mine and lastly Redwing Mine.

Only How Mine remained operational. In 2019, Metallon chairman Mzi Khumalo announced that they had commenced legal proceedings against the RBZ, claiming that the company had lost US$132 million worth of profits due to the central bank’s alleged “corruption and a sense of impunity”.

Redwing Mine had gone for more than three years without paying salaries to its 750 employees, resulting in the workers suing the company. Following the placement of the company under judicial management in 2018, most workers turned to artisanal mining for survival. At first some of the workers were working underground, but this stopped due to flooding which was triggered by the switching off of electricity supply by the Zimbabwe Electricity Supply Authority, citing non-payment of bills by the company.

Redwing Mine workers then joined artisanal miners at popular mining sites along Mutare River and around Penhalonga. However, things turned worse when a company known to artisanal miners as Prime Royal Mining arrived in Penhalonga in December in 2019.

Under the agreement, Redwing Mine and PRM get 30% each, while artisanal miners get 40%. It was also established that PRM was to set up a milling plant and artisanal miners are obligated to send their ore to that mill.

When Prime Royal Mining entered into Redwing Mine, the ground manager reportedly left at the beginning of 2020 under a cloud of accusations. The replacement is a man who reportedly claims to be linked to the security team of a member of the presidium.

As the PRM agreement with Redwing Mine nears expiry date, CNRG understands the milling company has been making frantic efforts to negotiate a three-year contract which will grant them authority to deploy artisanal miners until 2023.

Illicit financial flows
Hundreds of tonnes of gold ore are processed by Prime Royal Mining at Redwing Mine premises. According to sources within Redwing Mine, monthly gold production levels are estimated to be between 4kg and 5kg.

However, it emerged that security is lax along the production line at the mine and, as a result, some people smuggle their ore outside the plant.

Those who smuggle the gold ore will first bribe the security guards. Smuggling has given rise to disparities in terms of earnings for artisanal miners because while some get 40% share, those who are smuggling are retaining 100% value.

CNRG also established that PRM buys gold from artisanal miners at straight weight prices of US$40 per gramme instead of fine weight price of US$57 per gramme.

It also emerged during the research that Prime Royal Mining does not have a clear managerial structure on the ground and, as a result, it has been difficult for artisanal miners to know who exactly is in charge.

Politicisation of Redwing
There are indications of involvement of senior politicians and members of the security sector from Manicaland province in the Penhalonga gold rush. CNRG established that in December 2019, some of the Joint Operations Command (Joc) officials from Manicaland province held meetings at Redwing Mine to deliberate on the future of the company.

Some of the senior police officers in the province have since been allocated gold-rich spots to extract the mineral without following proper regulatory procedures as required by law.

Politicians and other politically linked elites use power and political connections to access gold claims and parcel them out to syndicates which they manage.

The closure of Redwing offered an opportunity to political elites, the politically connected and securocrats who, with the aid of the organised syndicates, are exploiting the mine’s claims dotted around Penhalonga and Tsvingwe for profit without due care for the environment.

Mutasa Rural District Council cannot effect council by-laws to stop the illicit mining allegedly due to fear of retribution from those behind the mining activities. In the same vein, Ema has failed to put an end to the activities or to punish those undertaking illegal mining as the law requires. Police will not intervene because the people involved are “untouchable”.

Observations in Penhalonga have shown that police are providing security for the gold-mining actors by making sure that ore that is coming from the pits goes straight to the mill. State security is providing services to a shadowy private company that is rumoured to belong to some members of Joc.

The involvement of politicians has undermined the rule of law, stability and livelihoods of the affected communities. Corruption, sometimes coupled with intimidation and violence, has become common.

CNRG investigations have revealed that the haphazard mining in Penhalonga has now taken the form of organised crime as the syndicates are interlinked and use corruption and violence to secure mining rights and resource rents.

There is a clandestine secretive consortium which holds the strings of artisanal mining in Penhalonga.

Environmental disaster
Penhalonga and Tsvingwe, home to over 20 000 people, is now a huge artisanal mining field with open pits and dumps all over.

This is in violation of section 73 of the constitution of Zimbabwe which states that every Zimbabwean has a right to an environment that is not harmful to their health or wellbeing.

The open pits left by artisanal miners pose a health hazard to locals as an unrecorded number of people have been injured after falling into the holes.

Subsistence farmers with fields between Redwing Mine offices and Liverpool compound told CNRG they will not be planting in the 2020-2021 season as their fields have been overrun by artisanal miners.

Mutare River is now mud-choked and the water is contaminated with mercury from artisanal mining activities. There is massive siltation that has greatly affected the riverine and aquatic ecosystems.

Artisanal miners have also been wantonly cutting down trees in one plantation at Zengeni area in Penhalonga to obtain poles for makeshift camping shacks.

Mutasa Rural District Council has not been able to stop the activities, but Mutasa South Member of Parliament Regai Tsunga told CNRG he is in the process of engaging the ministry of Mines and Mining Development to halt illegal mining activities in the area.

Tsunga said water reservoirs in Penhalonga face contamination from chemicals used at Redwing Mine and also by artisanal miners along the Mutare River.

Ema Manicaland regional manager Kingstone Chitotombe said the extent of environmental destruction in Penhalonga is a cause for concern.

Potential conflict
The conversion of Redwing Mine to a huge artisanal mining field has caused political and socio-environmental disputes within the Penhalonga and Tsvingwe communities. The politically connected have been displacing other artisanal miners from the mining field.

The influx of people from other provinces has brought with it new dynamics which the people of Penhalonga now have to grapple with.

According to Councillor Njazi Sabuneti, Penhalonga and Tsvingwe have been a relatively safe place, but since the coming of PRM and the up-scaling of artisanal mining at Redwing Mine, there are increased incidences of mugging in the area.
–CNRG/The NewsHawks.

Mnangagwa tramples on constitution over Malaba