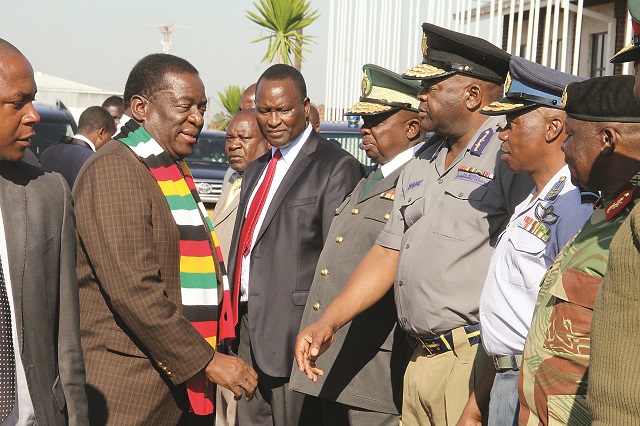 FAILURE by Parliament to play an oversight role on the proposed National Security Council will render the new body ineffective in bringing the country’s security services under civilian control, a new report says.

After the formation of the shaky coalition government constituting Zanu PF and the two MDC formations, the National Security Council Bill was promulgated in 2009 following criticisms over the conduct of the country’s security apparatus in civilian affairs.

The Act expired when the tenure of the Government of National Unity ended in 2013 but the current constitution which was overwhelmingly supported during a referendum held during the same year makes provision in section 209 for a new National Security Council consisting of the President as chair, his deputies, minister responsible for security, security personnel and other persons as determined by the Act.

On June 6, a Bill was published in the Government Gazette to give effect to section 209 pertaining to the formation of the security council. The Bill was presented in the National Assembly on July 18 and is now awaiting its second reading.

According to the Bill’s memorandum, the purpose of the Bill is to fill in the gaps left by the Constitution – by specifying additional members and functions – and generally to bring the National Security Council into operation.

According to Veritas, a legal and parliamentary watchdog, the memorandum does not mention the main purpose of the original Zimbabwe National Security Council Act, namely to bring the security services under civilian control.

“Why has it taken so long —nearly nine years — to bring the Bill before Parliament? And what has been done about the national security during the those nine years?” Veritas querries in its analysis of the Bill,” Veritas says.

“The council cannot have been operating because in the absence of legislation its only members have been those specified in section 209 of the constitution, namely the President and his Vice-Presidents.

“It skirts over the question of how decisions will be reached at Council meetings.  Will the military and security officers be able to outvote the civilians, or will the President and his Ministers have the final say?

“The Bill gives Parliament no role whatever in the nation’s security or the Council’s affairs.  Even though our Constitution does not contains a provision equivalent to section 198(d) of the South African constitution, which states that national security is subject to the authority of Parliament, our Constitution does say in section 119 that Parliament has power to ensure that all institutions and agencies of government at every level act constitutionally and in the national interest, and for that purpose: “all institutions and agencies of the State and government at every level are accountable to Parliament.”

The 2009 Act, Veritas observes, required decisions to be by consensus, but clause 5 of the Bill is silent about whether there must be consensus or whether decisions will be by majority vote – and, in the event of the latter, whether the President and ministers can be outvoted by military personnel.

“The President will appoint the additional ministers to the council “in consultation with” the ministers of intelligence, defence, police, prisons and finance, and some court cases suggest this means the President will  have to get the consent of those ministers before making appointments to the Council.  Rather oddly, no such consultation will be needed to remove the additional ministers from the council, so they will hold office at the pleasure of the President,” Veritas says.

The 2009 Act required decisions to be by consensus, but clause 5 of the Bill is silent about whether there must be consensus or whether decisions will be by majority vote – and, in the event of the latter, whether the President and ministers can be outvoted by military personnel.

“Clause 7 of the Bill will give the council powers to issue general or specific directives to any security service or person in connection with matters of national security.  Security services and persons to whom directives are given will have to comply with them, though they will be entitled to receive “all the State support necessary” to enable them to comply.  Directives will have to contain safeguards to protect the fundamental rights of individuals – but not, apparently, companies, which also have fundamental rights.”

“Even with the safeguard that fundamental rights must be respected, it is a bit disturbing that the Council will be able to issue directives to private persons,” Veritas argues.

“There should be some indication in the Bill as to what the directives may contain:  that sensitive documents must be kept securely, for example.  There also should be some further limits:  should the Council, for example, have power to direct a company to manufacture weapons for the Defence Forces?  Surely not. Should there not also be provision for a review of directives by a court?”–STAFF WRITER.

Farmers refuse to blink as they shun GMB price