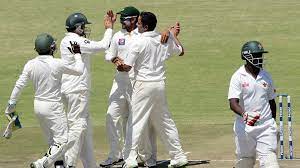 PAKISTAN looks likely to proceed with the two Test matches in Zimbabwe after all, following earlier indications that the Asians could drop the five-day format on their upcoming tour of Africa next month.

Reports last week said the Pakistan Cricket Board (PCB) was considering postponing the Test series from the Zimbabwe leg of their tour to this region, scheduled to take place after a pair of white-ball series against South Africa.

The reason given for the proposed postponement of the Tests was that the PCB was eager to complete the Pakistan Super League (PSL) before the beginning of the Indian Premier League (IPL) mid-April.

The three Twenty20 internationals on the Zimbabwe leg of the tour would, however, go ahead under a tweaked itinerary.

However, Pakistan’s chief selector Mohammad Wasim has since announced a 20-man squad for the two Tests in Zimbabwe and, with no official statement yet from both national boards regarding the series, it does appear that it will go ahead as scheduled. Reports indicate that both the two Tests and three T20s will be played in Bulawayo.

The Asian giants will fly into Zimbabwe’s second largest city on 17 April, a day after completing their three ODI and four T20 series against the Proteas.

The specialist Test players on tour will remain in Pakistan and only travel here ahead of the series.

The Test series will provide much-needed game-time consistency for action-starved Zimbabwe in the longer format of the game following recent matches against newcomers Afghanistan in the United Arab Emirates (UAE).

After demolishing Afghanistan by 10 wickets inside two days in the first Test, the Zimbabweans were brought down to earth in the second contest, losing by six wickets as the two-match series finished in a one-all draw.

The UAE tour, meanwhile, has ended in misery for Zimbabwe, who have now lost the three-match T20 series to the Afghans following defeats in the opening two ties. The last match, a dead-rubber, is on this Saturday.
—STAFF WRITER