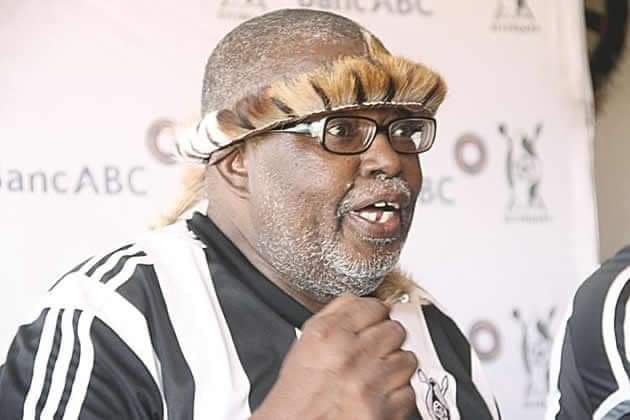 NDUMISO Gumede is preceded in death by eight legends of Zimbabwe’s oldest football club, Highlanders, who are immortalised in a hit song composed in the late 1980s in praise of team heroes.

Of them all, it isn’t surprising that Gumede, who passed on this week in his hometown of Bulawayo at the age of 76 after being in football for nearly five decades in a very long administrative career, is the first club great hailed in Lovemore Majaivana’s all-time classic, titled Tshilamoya, a nickname of Highlanders.

It’s a fine piece of musical work that almost always gives you goose-pimples, even for those that do not support Highlanders, a tune that puts you in the perfect sporting mood.

A lot of us first heard of the name Ndumiso Gumede through the song in our younger days and probably never imagined a time in the future – in my case anyway – grilling the man behind the name in a press conference and getting to know him at a personal level.

Ndumiso Emmanuel Gumede was born in Bulawayo in October 1945 and achieved legendary status in Zimbabwean football in his lifetime as an administrator at his beloved Highlanders and at national level, occupying various positions of influence in the game.

Let me state from the outset that this is by no means an attempt at a blow-by-blow account of Ndumiso Gumede’s life.  There are lots of people, of course, far more qualified than me to write riveting stories of the life and times of this larger-than-life figure of sport and the social scene in Zimbabwe.

I guess however that anybody who came into close contact with Gumede – even on a few occasions – will have a story or two to tell of him because it was hard to escape the magnet of the man’s wit, charm, intellect and great humour.

My account goes back to about 10 years ago when an investigation into Zimbabwe’s football match-fixing scandal was at its peak, and an international news agency I stringed for had taken keen interest in the developing story of this scam, dubbed Asiagate. It helped me a great deal that the media-friendly and articulate Gumede was heading the probe team and even though he couldn’t divulge much information for obvious reasons because investigation was underway, he cooperated well enough for copy to be filed to expectant editors.

Gumede was a lively and energetic character who thrived in the spotlight, and he was at his happiest and sprightliest when he had a task to complete, even as age caught up to him. The Asiagate assignment brought out the vigour of a much younger man in Gumede. Yours Truly, as Gumede was commonly fondly referred to by Harare press corps, was determined to accomplish the mission.

In September 2011, the then security chief of world football governing body Fifa, Chris Eaton, was dispatched to Zimbabwe on a work trip to meet authorities in the country for the purpose of assessing progress of the fixing investigation.

We packed a conference room at Oasis Hotel in Harare for the presser with Fifa’s crack investigator, who was flanked by Gumede and fellow Zifa official Elliot Kasu.

Australian Eaton is a stone-faced man with an unsmiling demeanour. He spoke with fierce disdain for match-fixing, vowing he was going all out after the bad guys in football, and warning illegal betting syndicates to brace for thunderous defeat.

It was a declaration of war in Harare by the former Interpol crime-buster, who after his outburst gestured to Gumede for closing remarks. Gumede, sensing the mood, cooled down the temperature in the room with a few playful remarks and much to everyone’s amusement, including Chris Eaton.

Trust only Yours Truly to send a tough guy like Fifa’s top detective into fits of laughter!

The genial personalities notwithstanding, people like Gumede – who exudes confidence and command respect in many circles – generally do not shy away from voicing their displeasure and revealing their true feelings when rubbed the wrong way.

Around 2010-11, I committed to penning a weekly column for the daily paper whose sports section I edited those days. In one of the early instalments, in which I had a bit of a go at Zifa, I opined that the association’s board of directors was filled with “dinosaurs who belong to the annals of football history” in Zimbabwe.

It was a brutal critique of Zifa inclusively as a board, but my respect for Gumede and his track-record kept reminding me that it was probably unfair to have included him.

Worse for me, Gumede had come across my article, not surprisingly, because you expect people like him to be widely read.

As I entered the presser venue in the company of another journalist, Gumede, who was with the Zifa CEO Jonathan Mashingaidze, accosted me at the entrance.

“Muchinjo,” he thundered. “You said we are dinosaurs! Are there no old people where you come from?”

To his credit and to my relief, Gumede had his trademark smile even as he registered his protest, and as I mumbled out something in my defence, he didn’t let me finish: “It’s okay, young man, how are you doing?”

He was smiling and petting me hard on the shoulder as he said that – the kind of fatherly gesture that gave Gumede an aura of warmth, assuring you that indeed everything is okay.

But he had made his point, in a manner that amiable folks like Gumede express their disapproval. I felt awful and a bit remorseful, even though I knew I should not have included Gumede in my unflattering remarks about the Zifa board.

Gumede had a special bond with football. His interests in the game were clearly not selfish. When you selflessly put yourself at the service of something loved by millions of people, it is understandable at times to feel slightly miffed and disheartened by criticism, whether the criticism is shared as a group or pointed to an individual.

Gumede viewed his involvement in football as servant leadership, something perhaps signified by one rather hilarious retort of his during a press conference: “If football doesn’t need me anymore, I will wake up tomorrow at my mother’s house!”

So I thought about the remark I had made in my column. Dinosaur? A contextualised definition is: “a person or thing that is outdated or has become obsolete because of failure to adapt to changing circumstances.”

I’ll always stand by it, it perfectly suited most of those Zifa board members back then. But certainly not Gumede.

Even as he turned 76 two months ago – and was two years shy of marking a half-century of football leadership – Gumede was able to evolve, because of the nature of his personality which made it very easy for him to mix with people of different generations and backgrounds. He was a man about town, and he remained so until the very end.

This is what made him tick, and for four good days I had the privilege to witness it close-up eight years ago. We had travelled to Egypt in 2013 for Zimbabwe’s World Cup qualifier against the Pharaohs, won 2-1 by the host.

Head-of-delegation Gumede, with not much to do after completing his official daily FA duties on the trip, was comfortable spending hours with the traveling reporters. Four us, his wealth of knowledge on football and life in general were a source of great fascination.

Days before the match, in the biting cold of charming coastal city Alexandria, we would huddle together with Gumede on pitch-side benches of the hotel’s football field, watching the Warriors in training, and chuckling heartily throughout as we listened to stories of yesteryear.

For it would not be Yours Truly if there was no humour is his storytelling.

Invited guests and journalists who watched international cricket at Queens Sports Club in Bulawayo from around 2003 used to praise the competence of a young Matabeleland Cricket Association official, the ever-smiling Samu Phiri.

Manning the Bulawayo provincial office nearly single-handedly and efficiently back then, she rose through the ranks and these days Samu Nkiwane – as she is now known as – is one of the longest-serving and valuable staffers of Zimbabwe Cricket (ZC), a credit to the game in her new role based out at the head office in Harare.

Last week, Samu – who is back home in Bulawayo for the festive break – attended an appreciation event hosted by Highlanders in the city for Gumede. Posting a picture of herself on Facebook with Gumede and another young relative at the function – all three beaming – she wrote about how proud she was of her uncle “for being a true leader in the family and in sport.”

Out of interest, I asked Samu – who I have known since 2004 – how exactly she was related to this absolute giant of Zimbabwean football.

She excitedly responded: “He’s my mom’s brother! You must write about us!”

We both never imagined I would be writing about it so soon, just a week later, in a eulogy.

World Rugby lifeline: Why Zim may not cash in

Rugby debate: ‘Playing dirty vs being too soft’