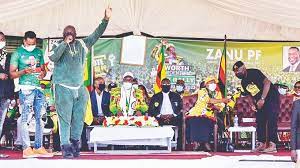 AS political temperatures hot up ahead of next month’s by-elections, a new soundtrack is reverberating in the air as politicians put their hope in A-lister artistes to attract huge crowds in efforts described by observers as a scramble for the youth vote.

This follows a furious drive by politicians, particularly President Emmerson Mnangagwa’s Zanu PF and Nelson Chamisa’s Citizens’ Coalition for Change (CCC), to engage celebrities, socialites and musicians in their campaign ahead of the 26 March by-elections.

Gatherings of a political nature had become rather pedestrian without the infectious melodies and rhythms from the ghetto that have captured the imagination, arousing political debate on social media.

Since the start of the campaign period, political parties have gone all out to engage influential artistes, including the much-celebrated Mbare-based Zimdancehall chanters from Chillspot Records, DJ Fantan and Levels.

Zimdancehall artistes have become the most sought-after performers as the country gears for crunch by-elections, widely acknowledged as a dress rehearsal for the 2023 polls.

The influence of Zimdancehall music, especially in the high-density suburbs, has been undeniable in recent years.

And as political parties push to get the elusive youth vote, the genre has once again emerged as a trump card for anyone  either encouraging young people to register or come out in huge numbers to vote in March.

Observers say the Zimdancehall soundtrack will become an important determinant in the 2023 election as political parties look to engage youths.

Zimdancehall, a localised sub-genre of the Jamaican dancehall music, is performed in local languages, mainly Shona. It has taken the music scene by storm in the pat decade.

While the artistes were once vilified as distracted and unfocused youngsters who chase illicit drugs, alcohol and easy money, they have found themselves in the middle of a tug of war between major political parties.

Prior to the show, the cast of performers was advertised alongside Mnangagwa’s face, showing their importance to the proceedings of the day.

Zanu PF sympathisers would go on to over-hype the involvement of the youthful chanters, stirring a tug of war on social media.

This would trigger a reaction from Citizens’Coalition for Change (CCC) vice-president Tendai Biti who rubbished the genre during an address in his constituency, Harare East.

Zanu PF youth leader Tendai Chirau responded, sayingv: “You have all seen how Tendai Biti is busy insulting harworking youths like DJ Fantan and encouraging people not to listen to his music. As Zanu PF we do not do that.”

True to Charles Kennedy’s assertion that: “I do feel a sense of rhythm is important in getting your message across,” Zimbabwean politicians seem to have realised the power of this genre.

Last Sunday during the CCC election campaign launch in Highfiel, the music genre was once again the centre of attraction, drawing wild cheers.

Dancehall chanter Ricky Firen, who had in recent weeks publicly expressed support for CCC, took to the stage.

Earlier that week, CCC supporters had pledged to pay for another popular Zimdancehall singer, Judgement Yard and Seh Calaz, setting up a GoFundMe to cover artiste performance fees.

This shows how the genre has become a force to reckon with on the political scene.

While Seh Calaz did not show up, Ricky Fire performed for the gathered thousands, but he was left fearing for his life after a shadowy character issued threats on social media.

During his performance, Ricky Fire was joined by CCC president Nelson Chamisa, drawing loud applause from the crowd.

“There is no freedom that you will be given by the oppressor on a silver platter,” chanted Ricky Fire during his act.

Following his performance, other artistes, notably Sani Makhalima, came out in support of Ricky Fire.

Makhalima is one of the few artistes who have openly come out in support of Chamisa.

“You don’t have to be Chamisa’s supporter to know that corruption is destroying the country and to call for change or a better Zimbabwe,” Makhalima was quoted as saying.

It is apparent that music and social media will be a key factor in the run up to 2023, even determining the voter demographics.

Apart from music, Zanu PF has gone for broke in efforts to garner the elusive youth vote ahead of the crunch 2023 election, including recruiting preachers, socialites and artistes in a desperate bid to bag 2.5 million ballots.

Garnering the youth vote has been a toll order for Zanu PF as many young people are disgruntled over economic hardships.

As part of its voter mobilisation strategy, the ruling party has enlisted the services of social media luminaries like Madam Boss, Mai TT and controversial clergyman Passion Java.

The party is also believed to have bankrolled a collaboration between musician Roki, Congolese rhumba star Koffi Olomide and Tanzanian singer Rayvanny on the song Patati Patata.

In the song, the Congolese musician chants Mnangagwa’s name. This sparked outrage on social media last year from opposition supporters while Mnangagwa loyalists lapped it all up, joining a dance trend on TikTok.

While engaging musicians and celebrities is common practice across the world and not a new tactic, the upcoming election is likely to be influenced by these stars — in view of the  centrality of the youth vote.

However, it is unfortunate that artistes are sometimes used for political expediency without much accruing to them.

Some political outfits are well known for not paying artistes while some ride on the notion of exposure.

What is not in doubt is that any action by an artiste will attract a reaction from the public.

Cancel culture has been used to blackout artistes perceived to be supporting an opposing ideology.

While the political space is highly polarised, the arts sector follows in the same fashion.

“They are riding on popular sentiment which comes with popular culture. People are hooked on to the nostalgia that Zimdancehall brings. Politicians realise that they cannot only connect with communities using artistes,” Mhako said.

He said desperation to pocket an extra cent had exposed artistes to manipulative practices by politicians.

“Artistes are also hard hit and have no choice but to join,” Mhako added.

He added that even those artistes or so-called celebrities who chose to remain neutral are often dragged into the mire by political activists who manipulate sentiment for political expediency.

Taking a position is a double-edged sword as history has not been kind to artistes who dare support political causes, particularly for the status quo.

The history of Zimbabwean music is littered with examples of careers cut short for supporting certain controversial figures, with artistes living to rue their political choices.

“Despite the victimisation and cancel culture that wants to deter young people, it is going to be near-normal for artistes to support certain political persuasions,” Mhako said.

Until the Zimbabwean political landscape is mature enough to appreciate individual political choices, artistes should tread with caution.

The root cause of the Ukraine conflict

ZEC exposed over vote-rigging chicanery ahead of by-elections