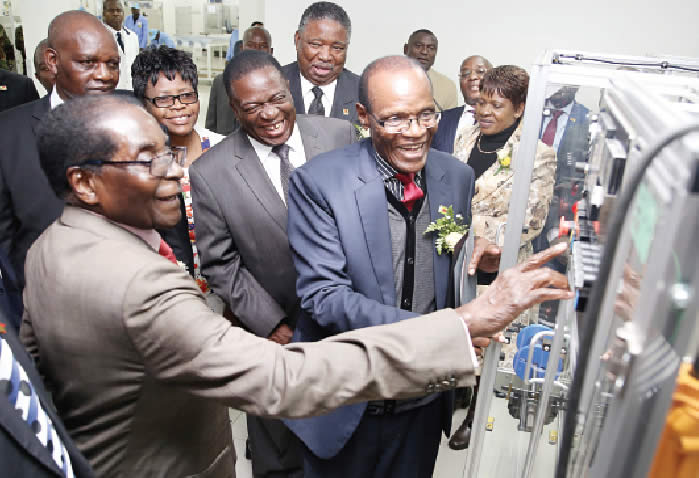 IN April 2016, the late former president Robert Mugabe commissioned an electronic passport centre at the then King George VI now Josiah Magama Tongogara Barracks. Five years later, his successor Emmerson Mnagagwa launches a new project before the first one has been put to use.

Mnangagwa was present at the event.

Without explaining what happened to the previous project, President Mnangagwa has again launched a new e-passport deal with controversial Lithuanian company Garsu Pasaulis.

The move has become a legal minefield, with the Zimbabwe Lawyers for Human Rights issuing Home Affairs minister Kazembe Kazembe a 48-hour ultimatum to set aside the regulations published in a statutory instrument this week.

The previous project launched in 2016 was established with technologies from Japanese companies Marubeni Corporation, Marpless, Uno Sesakusho and Toppan Instatsu Printing in partnership with GET.

Zimbabweans have criticised the latest deal as a manifestation of rent-seeking behaviour. A US$20 application fee, which will go to CBZ, and another US$100 payment are exorbitant compared to regional passport fees.

Added to that, the deals between the government and both CBZ and Gasu Pasaulis are shrouded in mystery as it is not clear why the bank and the company were selected to partner the government in this project.

Moreover, the government has expired all passports in December 2023, including the ones produced in December 2021. This means CBZ will collect US$20 from over five million Zimbabwean passport holders plus all new applicants.

In a letter to Home Affairs minister Kazembe yesterday, ZLHR said the passport fee regulations do not meet the administrative justice requirement or standard of rationality and reasonableness.

“It is our humble view therefore ought to be set aside on the grounds that: (a) The regulations were promulgated in terms of the Citizenship of Zimbabwe Act, Chapter 4:01. The enabling Act of Parliament being the Citizenship of Zimbabwe Act, does not give you powers to promulgate regulations regulating the issuance, phasing out of passports and stipulation of passport fees,” the ZLHR wrote in the letter.

“Nowhere in section 22 of the Act are you empowered to promulgate regulations dealing with the issuance of passports. Consequently, it is our respectful view that by promulgating the Citizenship (passport fees) regulations you acted ultra vires the powers conferred on yourself by the Citizenship of Zimbabwe Act.

“It is also our respectful view that the decision to make the current passport non-operational and non-functional by the 31st of December 2013 is grossly unreasonable. You are aware that many citizens had obtained or renewed their current passports and had parted with hefty sums of money in paying the prescribed passport fees. It is grossly unreasonable and unfair to impose an obligation on current passport holders to apply for an e-passport by December 2023 even when their current passports still have many years running before their expiration date. In our view, this is a violation of the right administrative conduct which is substantially fair and reasonable and hence is a breach of section 68 of the constitution.”

The organisation went further to request information on how CBZ Bank got the passport deal.

“In terms of the aforesaid regulations, we note that CBZ Bank is charged with the processing of all passport applications at an additional cost of a US$20 fee, in the interest of public accountability and transparency, we kindly request to be provided with the procedures and criterion used to designate CBZ Bank as the entity to be processing e-passports.”

An e-passport is a traditional passport that has an embedded electronic microprocessor chip which contains biometric information that can be used to authenticate the identity of the passport holder.

According to online information, it uses contactless smart card technology, including a microprocessor chip (computer chip) and antenna (for both power to the chip and communication) embedded in the front or back cover, or centre page, of the passport.

The passport’s critical information is printed on the data page of the passport, repeated on the machine readable lines and stored in the chip.

Public key infrastructure (PKI) is used to authenticate the data stored electronically in the passport chip, making it expensive and difficult to forge when all security mechanisms are fully and correctly implemented. And the currently standardised biometrics used for this type of identification system are facial recognition, fingerprint recognition and iris recognition.