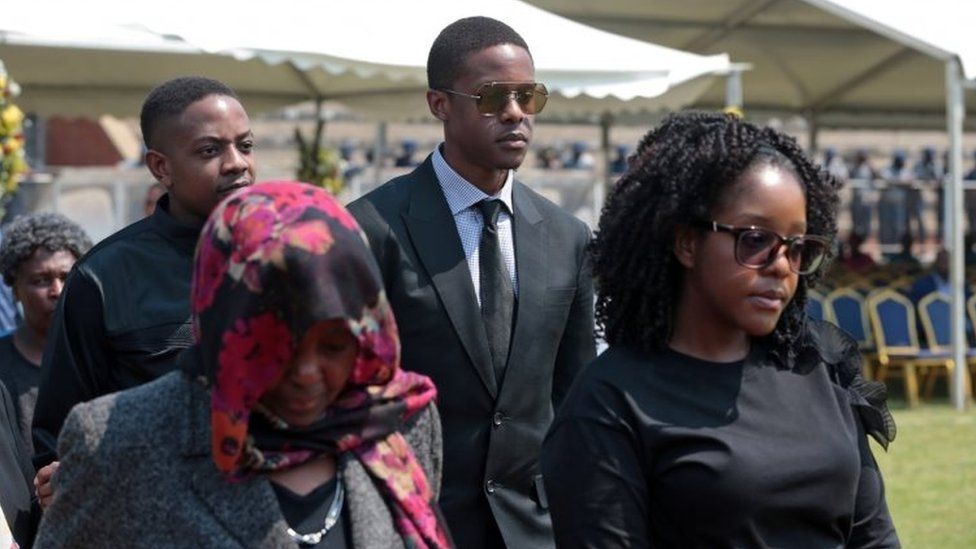 HIGH Court judges of appeal, justices Amy Tsanga and Fatima Maxwell, have granted authority to the late former president Robert Mugabe’s children to be part of proceedings in a case traditional leaders are seeking exhumation of the late strong man.

Mugabe’s children, Bona Mutsahuni, Tinotenda and Bellarmine are challenging an order for the exhumation of their father and confiscation of their livestock as ordered by Chief Zvimba Stanely Mhondoro.

In a judgement handed down on 12 May, the judges ruled allowed the children’s appeal against Chinhoyi magistrate Ruth Moyo who ruled they had no rights to appeal a judgement handed by the traditional court against their mother, Grace.

The traditional court had ordered the exhumation of Mugabe from his burial place at his rural home and his reburial at the National Heroes’ Acre.

A messenger of court was granted authority to seize five heifers and a goat, which Chief Zvimba said was for cleansing the country.

Bona and her siblings were aggrieved by the ruling and took the matter to the magistrate’s court to appeal.

The siblings averred that they were competent litigants to institute an appeal based on their real and direct interest in the orders of Chief Zvimba which affected their personal property.

Bona said she was duly appointed executrix to the estate of her father hence the interests.

The appeal at the lower court was challenged by Manongovere who insisted that the three had no rights to appeal a case that involved their mother and not them.

Manongovere said there was a misjoinder of Grace.

He said the children had “no basis of being dissatisfied with a decision of a matter in which they were not a party.”

The magistrates upheld Manongovere’s challenge, ruling the children were not party to the proceedings.

Bona and her siblings then appealed against the ruling at the High Court which ruled in their favour.

“In the context of customary law, the court finds no absurdity in allowing any person aggrieved by a decision of a community court to appeal against it, even though the aggrieved person was not a party in proceedings before the community court,” read the charges.

“Mr Nhokwara (Manongovere’s lawyer) argued that such an interpretation would allow every Jack and Jill to approach the court. That cannot be correct as the appellants must indicate the basis upon which they are aggrieved.

“In the court below, appellants stated that the orders of Chief Zvimba affect their personal proper judiciary functions at law. That qualification removes them from the group of mere busybodies. Sight should not be lost in the fact that this phrase allowing “any person to appeal is in the context of a customary law statute.

“Under customary law, the quest for justice is marked by procedural flexibility in permitting aggrieved parties, in any case, to access the court at any time.

“As courts, it is therefore important that we do not fall into the dangerous trap of downplaying these very positive procedural customary aspects by thrusting formalistic interpretations upon them.

“The court below erred in restricting the right of appeal to persons who were parties in proceedings before the community court.

“On the basis of the above, the first and second grounds of appeal succeed. The appeal be and is hereby allowed with costs. The judgment of the court a quo is set aside and is substituted as follows, the first preliminary point be and is hereby dismissed and costs be in the cause.”

The judges also remitted the matter back to the Chinhoyi magistrate’s court for continuation of the hearing.

During the hearing  Bona and her siblings argued that no one except them has the authority over their father’s grave, warning that anyone who would tamper with it will be committing a criminal offence as outlined in the Burial Act.

Through their lawyer Tawanda Zhuwarara, Mugabe’s children insisted that the lower court must first determine if the village head who authorised exhumation and reburial has the rights to do so.

According to the cited section, anyone who wilfully destroys or causes to  be done any damage, defacement or disfigurement to any monument, vault, tombstone or grave whether within or without a cemetery shall be guilty of an offence and liable to a fine not exceeding level five or to imprisonment for a period not exceeding six months or both.

However, Pardon Nhokwara representing Manongovere argued that Grace should have appealed the decision and not her children.

“Appellants chose to mis-join the person who the order related to who is Grace Mugabe. We do not even know her position. She might even be satisfied by the judgement,” he said.

She also insisted that her children have authority to appeal their father’s reburial.

Mugabe died in Singapore on 6 September 2019 while receiving medical treatment at a private hospital.

He was buried in a family courtyard at Kutama in Zvimba, his rural home.

This was after several attempts by senior government officials to have him interred at the National Heroes’ Acre where other late nationalists are buried.

However, Mugabe’s family resisted, insisting before his death he had told them he wanted to be buried at the family’s rural homestead.

In July last year Chief Zvimba summoned Mugabe’s wife Grace to appear before his traditional court and explain why her husband was buried in the family courtyard in breach of traditional custom.

However, the widow did not attend the hearing held at Murombedzi Growth Point, amid reports she was in Singapore.

A default judgement in which Chief Zvimba ordered Grace to pay a fine of five cows and two goats for breach of traditional custom was made.

The chief also ordered Mugabe’s reburial at the national shrine before 1 July 2021.

The court battle then began at the Chinhoyi provincial magistrate’s court.

The children argued the traditional leader has no jurisdiction in interfering with their family issues.

Shutdowns not the best protest strategy