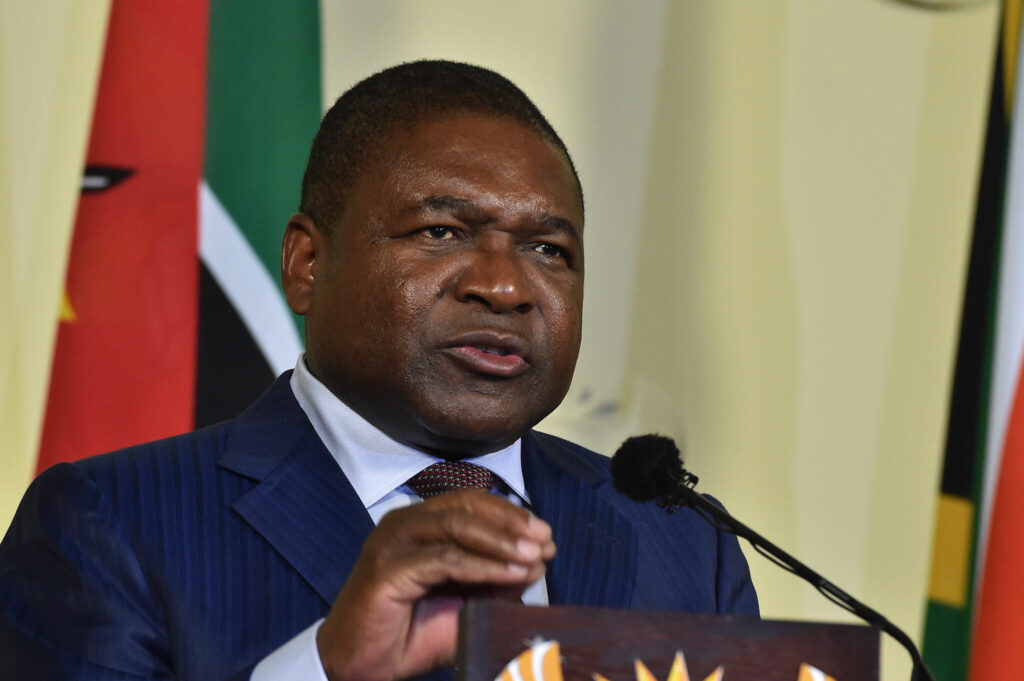 With outside attention focused on violent extremism and gas exports, Mozambique’s democratic backsliding is proceeding apace.

IN his first three years after becoming president in 2015, Filipe Nyusi’s governance led Mozambique to fall in the Economist Intelligence Unit’s Democracy Index from a hybrid regime to an authoritarian one.

A hybrid government combines democratic traits such as frequent and direct elections, with autocratic ones such as political repression. An authoritarian system is characterised by highly concentrated and centralised power maintained by political repression and the exclusion of potential challengers.

Mozambique also dropped in the Ibrahim Index of African Governance, which assesses 54 countries on the continent. In 2010 it was in 22nd position – by 2019 it had fallen four places to 26th out of 54.

As the end of Nyusi’s second term approaches, he still has not managed to shift Mozambique from the uncomfortable position of “authoritarian regime”. And signs of autocracy are increasing, with suspicions growing that he intends to change the country’s constitution to accommodate a third term.

This has received little global attention, including from Nyusi’s peers in the Southern African Development Community (Sadc) and African Union (AU). Everyone seems focused on fighting the northern Mozambique insurgency and on the country’s first liquefied natural gas export to ease Europe’s energy crisis since the start of Russia’s war against Ukraine.

The fall in the Democracy Index was prompted by the rigged 2018 elections, which observers inside and outside Mozambique widely criticised for unlawfully favouring the ruling Liberation Front of Mozambique (Frelimo). In subsequent years, this tendency by the Maputo regime to undermine the levers of democracy has continued.

In the 2021 Democracy Index, Mozambique scored 25.8% in the electoral process and pluralism component, 14.3% in the functioning of government, 50% in political participation and political culture and 35.3% in civil liberties. These results placed it below countries such as Iraq, Pakistan and Mauritania. In Freedom House’s 2021 world ranking, Mozambique lost 16 points compared to the previous year. With 43 points out of a possible 100, it is now classified as a “partially free” country.

The most recent signs of centralising power around one individual and his political cronies were seen at the Frelimo congress in September. Nyusi – the only candidate for party leadership – was elected with 100% of the 1 136 delegates’ votes. Roque Silva, Frelimo’s general secretary and one of Nyusi’s greatest supporters said it was ‘a result that we are very proud of; it is the 100% Nyusi brand.’

It was not just Nyusi who was re-elected in a clean sweep. On the eve of the congress, the 11 Frelimo provincial secretaries – all proposed by Nyusi’s faction within the party – were also voted in with 100% of ballots in an uncontested race.

The decision to have single candidates standing for Frelimo leadership, both at provincial and national levels, was announced months earlier by Silva. He openly said no one should volunteer to run for these positions and that potential candidates should wait for government to want them to compete.

The centralisation of power within the ruling party could be linked to Nyusi’s possible bid for a third term at the top. Mozambique’s constitution limits the president to two terms, but for years, the independent media and research community have speculated whether Nyusi wants to extend his power.

Just before the September congress, the issue was finally discussed by a formal Frelimo body. Castigo Langa, a former energy minister and member of the Frelimo Central Committee, told Nyusi: ‘If a proposal appears in the sense of being the next Frelimo candidate in the presidential elections, please do not accept. It would not be good either for Comrade President and your family, or for Frelimo, and it would be a precedent with unforeseeable consequences for our country.’

Langa’s plea was not well received. He was formally repudiated by the party’s Political Commission, ostracised, and soon disappeared from public space.

More worrying than Nyusi’s authoritarian tendency is how a 60-year-old political party allows its leader to prevent members from exercising free elections and expression. Frelimo has founding members who are still alive, including two former presidents, Joaquim Chissano and Armando Guebuza – but none can openly oppose Nyusi. While Guebuza said nothing during the five-day congress, Chissano expressed hope of reconciliation between Nyusi and Guebuza’s supporters, who worry about arrests in Guebuza’s inner circle, including his son.

Graça Machel, widow of Mozambique’s first president Samora Machel, has actively called for more democracy and free speech in Frelimo and the country, but also seems to have lost strength. She withdrew her candidacy to the Central Committee, which was interpreted as a ‘silent cry’ against the ruling party’s growing authoritarianism.

With about two years left of his second term, Nyusi seems to have full control over Frelimo’s decision-making bodies. That gives him an open path to impose his re-election for a third term by changing the constitution. Many Mozambicans reject this but lack the power to stop him. Parliament would also not be a barrier because Frelimo has a two-thirds majority – enough to change the constitution.

Mozambique’s civil society organisations must speak out against Nyusi’s authoritarian march. And the AU, which has pledged to work with civil society to prevent unconstitutional changes of government, should persuade Nyusi to respect Mozambique’s constitution and democracy, and avoid a political crisis.

About the writer: Borges Nhamirre is a consultant at the Institute for Security Studies (ISS) in South Africa.–ISS.

How to get maximise return on expo investment