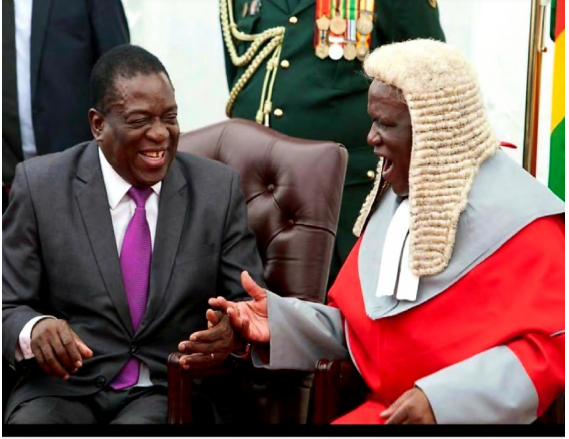 WHILE President Emmerson Mnangagwa wants Chief Justice Luke Malaba to continue serving until 2023 so that he becomes his last line of defence should the presidential election be contested in court, senior Justice ministry officials are opposed to the move, arguing it is bad to amend the constitution for the benefit of an individual.

OWEN GAGARE
Government officials told The NewsHawks this week Justice minister Ziyambi Ziyambi and permanent secretary Virginia Mabhiza, among other officials, were firmly against the idea, although they have privately said they support his extended stay.

Malaba’s judicial reign is coming to an end by operation of law at midnight on 15 May 2021 when he turns 70.

If passed, the amendment will allow the President to extend the tenure of a judge who has reached the age-limit by up to five years through options of one-year extensions at a time.

Already, The Constitution of Zimbabwe Amendment (No. 1) Act, published in an Extraordinary Government Gazette on September 7, 2017, gives the President power to appoint the Chief Justice, deputy Chief Justice and the Judge President of the High Court after consultations with the Judicial Service Commission.

The law has however been invalidated pending its proper passing by Senate which had initially allowed it through unprocedurally.

But even if the second amendment is passed into law, the constitution does not allow the law to be applied in retrospect, meaning incumbents cannot benefit.

Mnangagwa and Malaba however think there could be a way around the problem, including amending Section 328 of the Constitution.

Section 328 provides that “an amendment to a term-limit provision, the effect of which is to extend the length of time that a person may hold or occupy any public office, does not apply to any person who held or occupied that office, or an equivalent office, at any time before the amendment”.

A “term-limit provision” is defined as “a provision of this constitution which limits the length of time that a person may hold or occupy a public office”.

“Ziyambi and Mabhiza, among other officials, are against the extension because they believe it sets a wrong precedent. The argument is that the constitution should never be amended to serve the interests of an individual,” a senior government official said.

“They also think an extension would damage Malaba’s reputation and that of the judiciary, while also bringing further negative attention to the judicial system, which of late has faced a lot of criticism, including allegations of being captured by the state.

“There is also concern that there will be resentment by other judges. Retaining Malaba may be seen as a vote of no confidence in the competence of other judges, which will be problematic.”

A judicial official said the other issue is that age-limits ensure judges during the course of their service enjoy security of tenure throughout their term.

However, when a judge is given extensions — at the behest of the President — he or she loses his or her independence as they will always have to pander to the whims and caprices of the appointing authority who has discretion on renewals.

As revealed by The NewsHawks last week, Mnangagwa wants Malaba to stay ahead of the 2023 elections.

Malaba has been Mnangagwa’s long-time ally, including when he was deputising the late former president Robert Mugabe, and also while serving as Justice minister well before the November 2017 coup.

The Chief Justice has been a vital cog in Mnangagwa’s political machinery, helping him sanitise and legitimise the coup which toppled Mugabe, and thrust him into power.

Malaba has also run the judiciary in a way that has helped Mnangagwa’s regime, government insiders acknowledge.

In a unanimous ruling of the nine judges of the country’s top court, Malaba said Chamisa had failed to prove allegations of fraud and manipulation of the vote during the presidential poll.

It is understood that Malaba prevailed over some judges to ensure the unanimous ruling. Some judges wanted to dissent, but were whipped into line, sources said.

Government and judicial officials say Malaba was Mnangagwa’s strategic candidate to replace the late Chief Justice Godfrey Chidyausiku when he was Vice-President and Justice minister, while also plotting to succeed the late former president Robert Mugabe.

In his monograph on the presidential election, Excelgate: How Zimbabwe’s 2018 Presidential Election Was Stolen, former minister and MP Jonathan Moyo — a former Mnangagwa ally and now fierce critic — says the Zimbabwe Electoral Commission helped Mnangagwa to rig the 2018 elections before Malaba secured victory through the courts.

Moyo, also a professor of politics, says Malaba dismissed Chamisa’s application soon after receiving it while in Pretoria, South Africa, where he was attending his son’s wedding, which suggests a predetermined outcome.

Moyo further said Malaba’s attitude was not surprising given the close relationship between the two.

“When I worked closely with him and Emmerson Mnangagwa between March 2013 and December 2014, in the run up to his election as Vice-President and second secretary of Zanu PF at the expense of Joice Mujuru, Mnangagwa used to refer to the late Chief Justice Godfrey Chidyausiku as mutengesi (sellout) and to Malaba as munhu wangu uyo (my man).”

In a July 2018 ruling, Malaba in a court ruling said Mugabe freely and voluntarily stepped down, adding Mnangagwa’s assumption of power was done in terms of the law, although it was clear he had seized power through a coup.

This followed an application by the Liberal Democrats and Revolutionary Freedom Fighters, Bongani Nyathi, Linda Masarira and Vusumuzi Sibanda who contested the legality of the Mnangagwa-led government.

They argued that Mugabe tendered the resignation under duress and that Mnangagwa’s ascendancy was unconstitutional.

Chiweshe had ruled that the military intervention by the Zimbabwe Defence Forces which led to Mugabe’s resignation was constitutional, as the military sought to restore order in the country.

He said the military’s actions in intervening to stop the takeover of Mugabe’s functions “by those around him are constitutionally permissible and lawful”.

Malaba and Chiweshe thus played a critical role in sanitising and legitimising the coup which brought Mnangagwa to power.

A government official said Mnangagwa was convinced that Malaba is loyal to him and he should stay on.

“He has demonstrated beyond any reasonable doubt that he is loyal to the President. He helped him during Chamisa’s ConCourt application and played a big role to legitimise his rise to power. So that’s why the President wants him to remain in the position with 2023 in mind,” the official said.

In his book, Moyo also says in the run up to the coup, Mnangagwa worked hard to amend section 180 of the constitution to bar public interviews for the Chief Justice, deputy Chief Justice and Judge President so that he could handpick his preferred judges when he came in.

“When the amendment was introduced by Mnangagwa shortly before the coup, its intended beneficiaries were Mnangagwa himself and Malaba. It is not surprising that, with the amendment in their pocket, now Mnangagwa wants to raise the retirement age for judges to ensure that Malaba remains at the helm of the judiciary to do in 2023 what he did for him in 2018,” Moyo writes.

Immigration directors up for sexual abuse