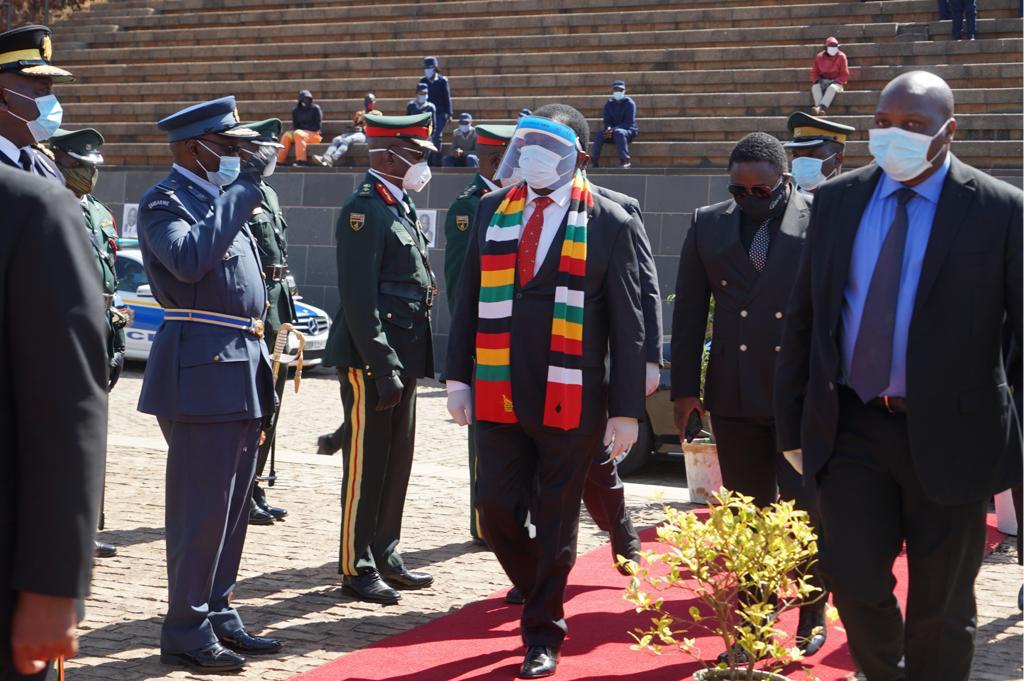 THE shock death two days ago of Zimbabwe’s Foreign Affairs and International Trade minister Sibusiso Busi Moyo — the face of the military coup which ousted the late former president Robert Mugabe and brought to power President Emmerson Mnangagwa in 2017 — has struck fear into the hearts of political bigwigs, security sources say.

The sources said movers and shakers are not just viewing Moyo’s death as a mortality issue, but a serious political contingency with far-reaching implications, including realignment of politics. Shiri and Matiza’s deaths are also politically material. After Moyo’s death, goverment operations almost immediately shut down, leaving just 10% of staff.

Sources said political gladiators fear not just Covid-19, but more its potential weaponisation by their opponents and concomitant political contingency — the role of the unexpected, the accidental and the unforeseen in politics.

This comes at it emerged today Moyo’s wife, Zimbabwe Anti-Corruption chairperson Loyce Matanda-Moyo, a judge, was yesterday rushed to hospital for checks in panic. She is now in isolation. Fears are that those who had exposure to Moyo, who was a retired Lieutenant-General, particularly close associates who interacted with him during holidays and VIP parties, are also at risk.

The sources say Moyo’s family is badly shaken and political gladiators such as Mnangagwa and co-Vice-President Constantino Chiwenga, who was not only close to the late minister, but also had close encounters with him during the holidays, are gravely worried.

In particular, Chiwenga is said to be looking  the worse for wear – visibly in a poor physical condition due to exhaustion. Besides being exhausted from battling Covid-19 in government, his health has been badly failing.

“SB (Moyo)’s death has sent shock waves across his family and the political landscape, especially among the power elites. There is panic in Moyo’s family and in the corridors of power,” a security source told The NewsHawks yesterday.

“For the family, the fear is of infections and the impact of that. For Chiwenga, Moyo was a friend and close ally. But beyond that the two also met in Victoria Falls during the festive holidays. So there is a personal risk involved and a political risk too. This is critical.

“For Mnangagwa, it’s personal and political too. He liked Moyo a lot for his discipline and courage, and there was mutual respect, but in reality the minister was a Chiwenga ally. Mnangagwa is shaken that his ministers are dying. Covid-19 has struck on his doorstep at home and work, just like in Chiwenga’s case, as he has lost friends and relatives.”

This was the nucleus of the 2017 coup, together with some who have been retired by Mnangagwa in a bid to neutralise the military faction.

“Chiwenga was in Victoria Falls during the festive period, with a group of 15 family members and friends. Moyo was also there with his family, including his wife. Rugeje was also there. There were many VIPs in town. Hotels were full, restaurants and the rainforest buzzing with a hive of activity. These VIPs couldn’t travel out of the country due to Covid-19, so they swarmed local tourist destinations,” the security source said.

“Moyo was staying in the presidential suite at Victoria Falls Hotel, but when Chiwenga arrived he vacated it for him and moved to Elephant Hills Resort. Rugeje was also staying at Elephant Hills. The three had a number of meetings, in which they discussed family issues, holiday events and serious political matters. Their meetings will have a bearing on how political events will unfold going forward.” but Moyo’s death will affect so many things.”

Zanu PF is currently split into two factions: one loyal to Mnangagwa and the other one to Chiwenga. They are locked in political brinkmanship over an unresolved leadership issue, flowing from Mugabe’s botched succession.

Moyo was a Chiwenga loyalist. So is Rugeje. In fact, most military players – those who executed the coup – are loyal to Chiwenga. Mnangagwa commands the support of his traditional Midlands and Masvingo political allies and newcomers. After having been besieged when his close security details recently tested positive for Covid-19, Mnangagwa is now facing a fresh headache after four ministers succumbed to the virus, while several other allies, including close family members, have been under siege.

“Following her trip to Victoria Falls last month, the First Lady tested positive for Covid-19, but she self-isolated and recovered from home. Medical experts had to attend to her at home as her security was told to stand down,” the security source said.

“It’s only after a week that they learnt that the First Lady had tested positive, but she has recovered. At least 20 police details (from the Police Protection Unit) have also tested positive. Police are waiting for results of nine others from the same unit; they were told the testing machine is down.”

The source added: “Moyo’s illness and subsequent death badly affected Chiwenga. The VP already had family members, relatives and friends affected by Covid-19. For instance, the death of his lawyer Wellington Pasipanodya – who worked with Wilson Manase – was a blow to him.

“These issues are intertwined from a political perspective. So connect the threads.”
Before all this, Mnangagwa wanted to enjoy his time out and not involve himself with work. But the rising cases, deaths of ministers and Chiwenga’s exhaustion and downheartedness got Mnangagwa deeply worried about the whole situation, a source said.

Zimbabwe has in the past few weeks recorded a dramatic surge in deaths, which now stand at 962 as of today. Cumulative infections are 30 523. This recently forced Mnangagwa to take the country back into lockdown.

Mnangagwa, currently on annual leave at a time Zimbabwe is battling the intensifying Covid-19 pandemic, including attendant deaths, was last week forced to abandon a trip to his Precabe Farm in Sherwood, Kwekwe, after several security personnel and his farm manager were struck by Covid-19.

Last October, Mnangagwa made drastic changes to his security team after nearly 20 soldiers from the Presidential Guard Brigade, including some that were deployed to his motorcade, tested positive for Covid-19, a few days before the arrival of his visiting Malawian counterpart Lazarus Chakwera.

Due to fear of Covid-19, sources say Mnangagwa will now only allow five ministers with him or any acting president to preside over state occasions, including funerals. Mnangagwa was yesterday forced to interrupt his month-long annual leave after Manicaland Provincial Affairs minister Gwaradzimba died due to Covid-19, a few days after nationalist Morton Malianga passed on. A few ministers attended.
Shiri, who was also a major coup factor and political variable, died of Covid-19 amid reports of weaponisation of the virus and poison.

In Zanu PF politics, poisoning and accidents have always loomed large, although their role is yet to be properly researched and exhaustively investigated. During Mugabe’s succession battle, poison — real or imagined — played a huge role, especially when Mnangagwa claimed he was poisoned at a Zanu PF youth interface rally in Gwanda.

The poison incident and the attendant dramatic events became a catalyst of the Mugabe succession fight and his downfall. It triggered a chain of events and reactions — leading to Mnangagwa’s expulsion and the subsequent coup — which actually propelled him to power within three months.

Malianga, who was a senior National Democratic Party, Zapu and later Zanu official, was detained with other top nationalist leaders from Zapu and Zanu from 1964 to 1974.

Although Moyo was respectful to Mnangagwa, he was a Chiwenga loyalist and a military man to the core.

“SB (Moyo) was a soldier to the core. I remember during the January 2019 riots sparked by fuel price increases and a cocktail of other issues, his military instincts were back fulltime during that time,” the security source said.

“I can tell you he used to carry an AK-47 in his ministerial car those days. His thinking was if the situation deteriorated, it might need a military solution, driven by civilian politics. Up to his death, that’s what he thought. He thought the politicians are messing up again; as did Mugabe and his regime. He wasn’t happy. As a result, Moyo was going to be key to the resolution of the current problem.”

Presidential spokesman George Charamba said Mnangagwa has not been exposed to Covid-19 as widely feared.

“He (President) was not exposed and was not in isolation. I was actually with him this morning. She (First Lady is well and you will be able to see her continuing with her humanitarian work after the modalities of how to get her team back to work have been worked out,” he said.

“He (Vice-President Chiwenga) is at work and was even having a virtual meeting with one of the friendly countries. He has been working really hard balancing as acting President and the Health ministry and we had a spike in deaths and new infections. So the President advised him to take a break and not attend the burial at Heroes Acre. That is the reason he did not attend.”

Return of indigenisation spooks the market