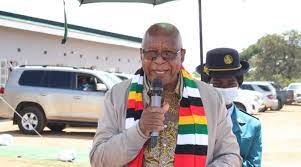 The NewsHawks last week revealed that among those who have settled in the conservancy is Finance minister Mthuli Ncube.

Zimbabwe’s ambassador to South Africa David Douglas Hamadziripi, former permanent representative to the United Nations Chitsaka Chipaziwa, Zimbabwe’s current ambassador to the UN Albert Ranganai Chimbindi and Air Commodore Marcelino Jaya, who is based at the Josiah Magama Tongogara Air Base in Gweru, have also settled in the conservancy, among other Zanu PF bigwigs.

In separate interviews, Midlands minister of State for Provincial Affairs and Devolution Larry Mavhima (pictured), Environment, Tourism and Climate Change minister Nqobizitha Mangaliso Ndlovu and officials from the Lands department which fall under Agriculture minister Anxious Masuka differed on whether the settlements were regular.

Ndlovu told The NewsHawks that he was against the settlements which were directed by Mavhima in his capacity as the chairperson of the Midlands provincial lands committee.

It emerged that in 2019 Environment minister Ndlovu tried to stop the settlements after Mavhima had made a request to allocate land in the conservancy.

At that time, Ndlovu advised that if anyone was to be allocated land in the conservancy, they were supposed to embark only on wildlife-related business and not farming.

The invaders are however farming wheat, among other crops.

“Reference is made to your letter of 10 September 2019 in which you request that the properties above be allocated for resettlement… the Ministry advises on the following: 1) the beneficiaries should have the capacity to engage in sustainable wildlife conservation…The properties are ideal for Black Rhino bicorns habitat that needs to be preserved.”

“To ensure proper utilization of land, ZIMPARKS shall be conducting periodic assessments”.

Ndlovu, who seemed to be avoiding direct confrontation with fellow ministers while speaking to The NewsHawks, said he would rather stick to what he wrote in the letter.

“My letter was very clear that any land allocations were to be done, the beneficiaries should have the capacity to engage in sustainable wildlife conservation,” he said.

Asked what corrective measures his ministry would take since the new settlers are actually conducting farming activities instead of undertaking wildlife-related projects, Ndlovu said it was beyond the purview of his ministry to act on the mess.

“Land allocations are done by the ministry of Lands,” he said.

Mavhima, who agreed that he was the one who directed the allocations, strongly defended himself.

“I did not allocate the land to people unilaterally. There was a lot that happened before that. A lot of stakeholders were involved and a series of consultations were done before the allocations. I do not wake up and just do what I think,” he said.

Agriculture minister Anxious Masuka and his permanent secretary John Bhasera did not pick calls or respond to messages sent to them.

Officials from the Lands ministry said they acted on the advice from the Midlands provincial lands committee.