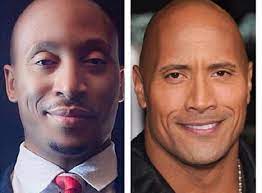 MORE often than not, people mistake us for other people because we perhaps look like someone else. There is a striking resemblance between Zimbabwe’s popular television personality Arthur C Evans (pictured on the left hand side) and Dwayne Douglas Johnson so much so that when you see one you think you have seen the other. And the two share a lot in common besides the looks.

He is a director of Technoexpert Construction, a category ‘A’ civil and building contractor that has more than 30 years of trade under its belt. 16 years of entrepreneurial experience, over 10 years of senior management experience, 15 years of media experience. There are many cards in the pack but there is only one Arthur C Evans (ACE). Evans (AE) speaks to The NewsHawks’ Jonathan Mbiriyamveka (JM) in this interview in which he explains why he is not offended when people mistake him for Johnson. And for the record, he said, “The Rock looks like me!” Read the excerpts:

JM: You are a ZBC TV news anchor. Tell us, how did it all start?

AE: ZBC were looking for anchors in 2005 and the owner of Strides boutique heard of their audition call for good English speakers that are not camera shy.
Despite my not being attached to Strides Modelling Agency, she forwarded my name. I went for interviews and did enough to get placed for some trial live news broadcasts.
My relationship with the national broadcaster has mainly involved the Main News bulletin but has in the past included numerous other productions in various roles such as voice overs, Good Morning Zimbabwe, other presenting roles and recently as a presenter and producer of the popular World Sports show which I’m excited to say will be making a return to the screens soon.

JM: Are you a full-time employee of ZBC or you have other side hustles that you do?

AE: I am a part-time employee. The station and I have enjoyed a great relationship and, despite my other commitments, I have always made an effort to stretch myself whenever called upon because behind the scenes I’ve met and still work with what I consider some of the most dedicated professionals that I have ever seen. Most people bemoan the quality of the broadcasts, but no matter the mountains the staff and leadership are always on duty ready to fulfill their commitments.

JM: What happened to your talk show and what was the thrust of the show?

AE: Which one? If you’re talking about the self-named ‘The Arthur C. Evans Show’ which aired on DStv, all I can say is that I never share my plans. I sow seeds and let people enjoy the harvest. The first season won awards and to this day I know that it set a benchmark for talk shows across the country and also catalysed a talk show frenzy as soon after it aired DStv was inundated which talk show proposals and ZBC at one time had about 22 talk shows on air after my show aired. This is important to me because motivation and personal development are important to me and it’s something I share on my social media (@arthurevanszw), so being a positive influence is great. I celebrate all the dream chasers.

JM: Most people believe Harare is more lucrative for business than Bulawayo. Do you believe in this?

AE: Not entirely, as you must understand that the grass is not always greener on the other side. Geographical economic trends have their own drivers and, if someone wants to conduct business in a region, they will still be subjected to the market forces in that area and therefore people should not think that it is a one-stop shop for success.

That being said, there is an obvious disparity in many decision-making processes, for example. In media all the biggest marketing and PR (public relations) agencies are in Harare and generally seek service providers and talent from Harare. I have been fortunate to have worked all over the country from Victoria Falls, Mutare, Harare, Kariba and Bulawayo as the majority of my service points. There is business all across the country, but unfortunately most large opportunities have decision makers based in Harare.

JM: Most people say you are a Dwayne Johnson look-alike. Do you know this and are you offended?

AE: I’m not offended at all and one day I had to concede wholeheartedly after a friend of mine in Chicago shared a picture of the two of us and we literally looked almost identical. Just to set the record straight, The Rock looks like me! Lol!

JM: Have you tried acting?

AE: I have acted before and I really enjoy it. I have played lead roles in a few theatre productions and recently played the lead in a DStv production, Gold Diggers. For my acting I am actually represented by an agency in South Africa. With business acting gigs are generally well scheduled.

JM: What has been your worst experience as a news anchor?

AE: The teleprompter stopped working and I hadn’t organised my back-up scripts so I fumbled for a few seconds to find my place and on a live television broadcast, a few seconds is an eternity for the viewer and the presenter. I would have been happy if the ground swallowed me!

JM: If you were to do it again what would it be?

AE: Allow to start with a disclaimer that I have generally always put my best foot forward in all I do and so everything has led me to this perfect moment. Even meeting you guys from The NewsHawks and being part of this publication and interacting with the person reading this very sentence is just perfectly set – it’s where I am meant to be.

However, if I could turn back time I would either continue to pursue athletics as I was a national athlete and even vice-captained Zimbabwe at Under-20 level. Or, not turned down a place at Zimbabwe Saints FC squad to play in the Premier Soccer League so that my body was conditioned for my trials that I was meant to attend at Galway FC in Ireland. Unfortunately, I tore my meniscus two weeks before trials and damaged my ACL (anterior cruciate  ligament) in my right knee. I could have been playing professional soccer in Europe if it wasn’t for that injury.

JM: Tell us, do you have a family or you are a singleton?

AE: I have a family that prefers to stay away from the public eye. They leave me to deal with that although they understand that when we’re together in public that we will be disturbed as people will want to meet me, take pictures and have a quick chat and I don’t mind because even if I don’t know everyone, I appreciate that they have taken time to recognise me and what I do.

JM: Any information you want to share with your fans?

AE: Every weekday I promote my monthly theme on my social media. You have to follow me on Instagram and Twitter @arthurevanszw and on Facebook @Arthur C. Evans. “ACE” are my initials, so many of my friends call me “ACE” and I don’t mind anyone calling me this. I’m always going to reply messages but people have to follow me and ask the hard questions and get ready for honest hard-hitting answers. If anyone is a Manchester United fan, then we will be very good friends!

Fine artist who customises your sneakers

Maskiri to release Mbinga from Binga