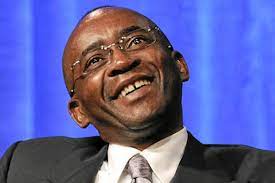 BORN in 1961, Strive Masiyiwa is a London-based Zimbabwean entrepreneur, billionaire and philanthropist. He is the founder and chairperson of Econet Wireless International, a global telecommunications group.

A devout Christian noted for his determination and social conscience, Masiyiwa has been described as a hero for helping millions of Africans gain access to the modern world through cellphone and internet technology.

According to Reference for Business, an organisation that compiles business biographies, when Masiywa was seven years old, his family fled the country as Ian Smith’s embattled white minority government began to crumble. The family settled in Kitwe, a city in north central Zambia known for its copper mines. Masiyiwa’s mother was an entrepreneur with interests in retail sales, small-scale farming and transportation.

His father worked at first in one of the nearby mines, but later joined the family business. By the time Masiyiwa was 12 years old, his parents could afford to provide him with a coveted European education. They sent him to private school in Edinburgh, Scotland. When he graduated in 1978, he travelled back to Zimbabwe, intending to join the anti-government guerilla forces there.

But, according to Time magazine, one of the senior officers told him to go back and study so that he could help rebuild Zimbabwe. Masiyiwa took the man’s advice and returned to school in Britain, earning a degree in electrical and electronic engineering from the University of Wales in 1983. He worked briefly in the computer industry in Cambridge, England, but soon returned to Zimbabwe in 1984, hoping to aid the country’s recovery after the war of Independence it had won in 1980.

Masiyiwa joined the Zimbabwe Posts and Telecommunications Corporation (PTC), the state-owned telephone company, as a senior engineer. The PTC quickly promoted him to the position of principal engineer. Masiyiwa became frustrated with government bureaucracy, however, and left the PTC in 1988 to start an electrical contracting firm named Retrofit Engineering. He was chosen as Zimbabwe’s youngest-ever Businessman of the Year in 1990.

The start of Econet

Masiyiwa recognised the great potential for wireless telephones in sub-Saharan Africa because the region had only two fixed-line telephones for every 100 people in the 1990s.

He saw that wireless networks would be quicker and less expensive to build than land-based networks that required stringing miles of telephone lines across rough terrain.

Wireless telephone service would also be less vulnerable than traditional landlines to the theft of copper wire for resale. Masiyiwa first approached the PTC about forming a mobile telephone network in Zimbabwe. The company was not interested, however, saying that cellphones had no future in the country.

Masiyiwa then decided to create a cellphone network on his own. He sold Retrofit Engineering in 1994 and started financing Econet Wireless through his family company, TS Masiyiwa Holdings (TSMH). He met with fierce opposition, first from the PTC, which told him it held a monopoly in telecommunications, and second from the Zimbabwean government, which swamped him with redtape and demands for bribes.

As a devout Christian, Masiyiwa was opposed to paying bribes and kickbacks to government officials. He decided to pursue his case through the courts. After a landmark four-year legal battle that went all the way to the Supreme Court, Econet finally won a licence to provide a mobile network service in Zimbabwe.

The court declared that the government monopoly on telecommunications had violated the constitution’s guarantee of free speech. Econet’s first cellphone subscriber was connected to the new network in 1998.

While Masiyiwa waited to gain the government’s approval for operations in Zimbabwe, he was able to start a cellphone network in neighbouring Botswana. Econet Wireless Holdings then established a presence in over 15 countries, including other African nations, New Zealand, and the United Kingdom. The company also diversified into satellite communications, fixed-line telephone service and internet.

Masiyiwa decided to relocate his family and the Econet headquarters to South Africa in 2000. Some observers suggested that he was going into exile from his homeland once again.

Masiyiwa himself said simply that South Africa was the best place from which to launch a multinational corporation because it had the continent’s most vibrant economy.

Masiyiwa eventually became a major shareholder in the newspaper’s parent company, Associated Newspapers of Zimbabwe, as well as the company’s chairperson. The government responded by shutting down the newspaper in the fall of 2003.

The paper continued to publish sporadically, though, through early 2004, and maintained an online version from South Africa. Masiyiwa sued for permission to restart the presses in Zimbabwe.

The Zimbabwean government countered by initiating criminal proceedings against four Daily News directors in June 2004 on charges of illegally publishing the paper without a licence. Government officials also threatened to revoke Econet’s licence to operate in Zimbabwe at that time.

The board of directors of Econet Wireless Nigeria (EWN), a company in which Masiyiwa held a stake, ousted him in 2003 when he failed to acquire necessary financing.

The board turned instead to Vodacom, a large South African telecommunications firm, which agreed to provide capital in return for management rights. According to the New York Times, however, Masiyiwa vowed to regain control of EWN. He said: “We’ve taken on Goliaths before.” (15 January 2004).

In the early months of 2004, Econet signed a 50-50 joint-venture agreement with Allied Technology (Altech), a South African information technology company. With Altech’s capital and Econet’s experience in telecommunications, the new company — dubbed Newco — announced its intention to pursue an aggressive expansion strategy in the developing countries of Africa and Asia.

Masiyiwa became a role model for other young African entrepreneurs through his vision and persistence. He was bestowed numerous national and international honours, including a place on Time magazine’s list of the world’s most promising young executives in 2002.

Masiyiwa attributed his success in part to the ethical integrity he developed through the devotional practice of reading the Bible for an hour every morning. He served on the boards of such international development agencies as the Southern African Enterprise Development Fund and the Rockefeller Foundation. He and his wife Tsitsi also founded and funded a charitable trust that had provided scholarships for more than five thousand children orphaned by Aids as of 2003.

He is married to Tsitsi and they have four children.