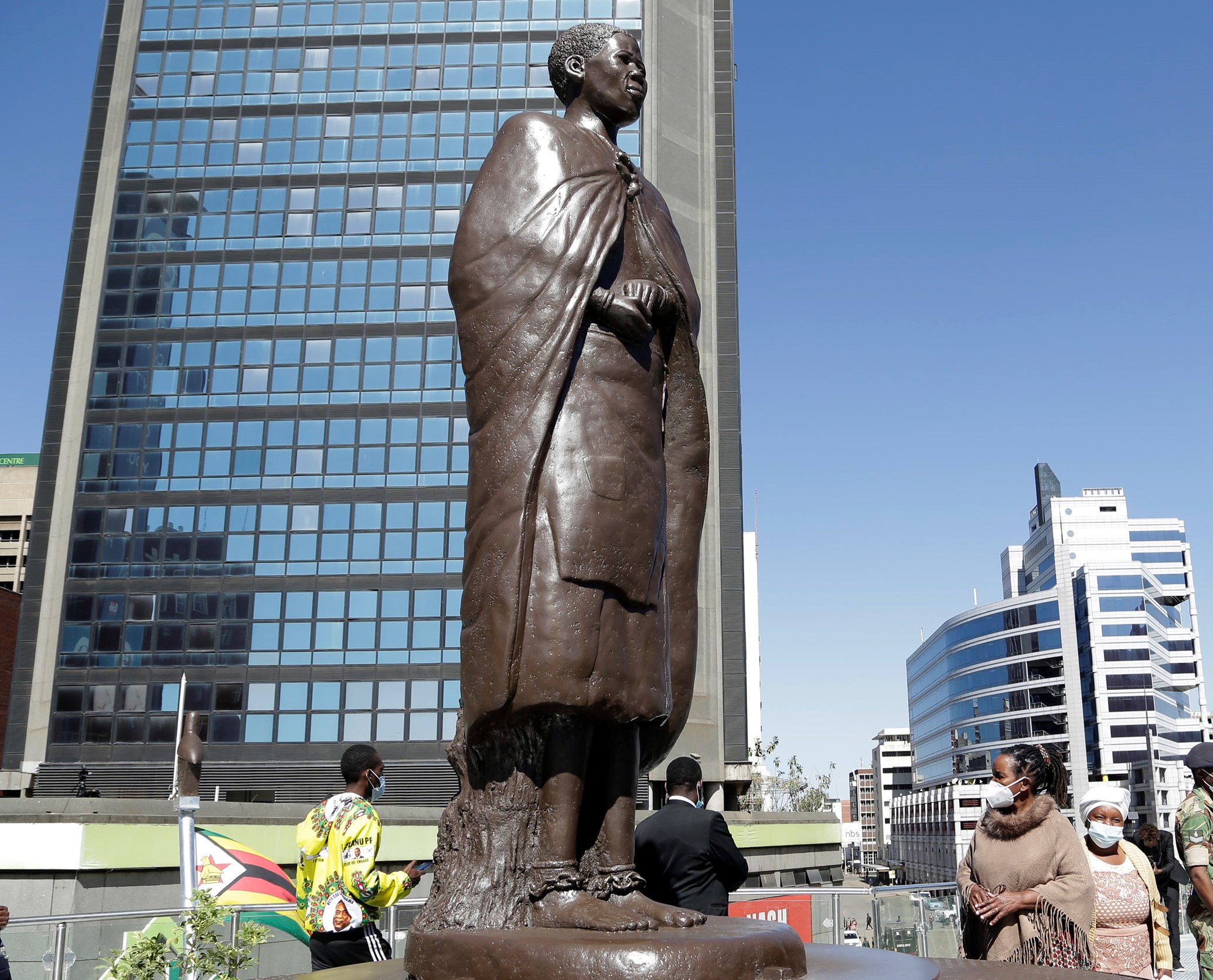 WHILE in Harare there were chants about Mbuya Nehanda’s bones rising, signified by the unveiling of the statue resembling one of her spirit mediums Charwe, in London the museum said to be having Nehanda’s skull said they had no record of ever receiving it.

BRIDGET MANANAVIRE
“Mapfupa angu achamuka (my bones shall rise),” as history has it, is the promise made by Nehanda as she encouraged the people of Zimbabwe to take up arms against white settler rule.

The celebrations were also to appease the spirit of Nehanda, which they evoked for guidance to prosperity.

President Emmerson Mnangagwa said the location of the statue was strategic in that it was meant to restore the values of traditionalism that had been demeaned after the setting up of a church on top of the well Mbuya Nehanda used to drink water from.

He was referring to the Presbyterian Church at the intersection of the two roads.

“My administration deliberately chose this site to place the statue and museum of our national heroine Mbuya Nehanda Nyakasikana. It is in this vicinity that there were springs from which she would drink water and rest,” Mnangagwa said.

“If you look at these trees there is a church there and a long time ago, when Mbuya Nehanda was fighting with the settlers, she would come to the well here and sit under a tree. When they killed her the settlers came and covered that well and they built the church on top, saying they have supressed the Zimbabwe traditions. Today her bones have risen because we have built her image here where she used to drink water.”

Still on bones, Mnangagwa said they were continuing with negotiations on bringing her skull back to Zimbabwe, but the Natural History Museum in London, in a statement to The Guardian on Wednesday, said they had informed the Zimbabwean authorities that they did not have the skull.

“We have had previous discussion with Zimbabwean officials on this subject but after extensive research have found no evidence to suggest that remains of Mbuya Nehanda are held or have ever been held by the Museum. We have shared all the information we have with the authorities in Zimbabwe,” the museum said.

Meanwhile, the Harare event became a concoction of Christianity and traditionalism as prayers were made to both Mbuya Nehanda and to God.

Five chiefs knelt in suits, some without shoes and some with them on, praying to Nehanda to guide the country’s leadership to prosperity.

As they knelt, they also clapped their hands in unison, saying they were appeasing the spirit of Nehanda.
This all was before the statue, which was covered with a black and white cloth, commonly used by spirit mediums, was unveiled by Mnangagwa.

The crowds were also entertained by traditional music from different acts including the mbira queen Stella Chiweshe.

Mnangagwa said the unveiling of the statue and monument of Mbuya Nehanda Nyakasikana was a conscious and deliberate decision to recognise, honour, memorialise and immortalise heroes and heroines.

“This monument that has been mounted here further tells a story from the viewpoint of the legendary heroine of Zimbabwe who courageously led a spirited resistance against colonial rule. Hunted down, arrested and hung by the settlers, her legacy will indeed endure for posterity.

“In her defiance to the brutal hanging, she declared that ‘mapfupa angu achamuka’ (my bones shall rise),” Mnangagwa said on Wednesday.

“About 123 years ago on 27th April 1898, Mbuya Nehanda Nyakasikana was hung by the settler regime. The British settler colonialists with their unbridled appetite to dominate, adopted unorthodox and inhumane measures to subjugate the people of this country.

“Through their spiritual insights, the white settler regime suffered some of the heaviest defeats recorded on European colonisation missions. The good fight for freedom and liberation by our forefathers was met by escalated settler impunity and brutality, as evidenced by the mass hangings. Our own iconic national heroine Mbuya Nehanda was a victim of such settler savagery.”