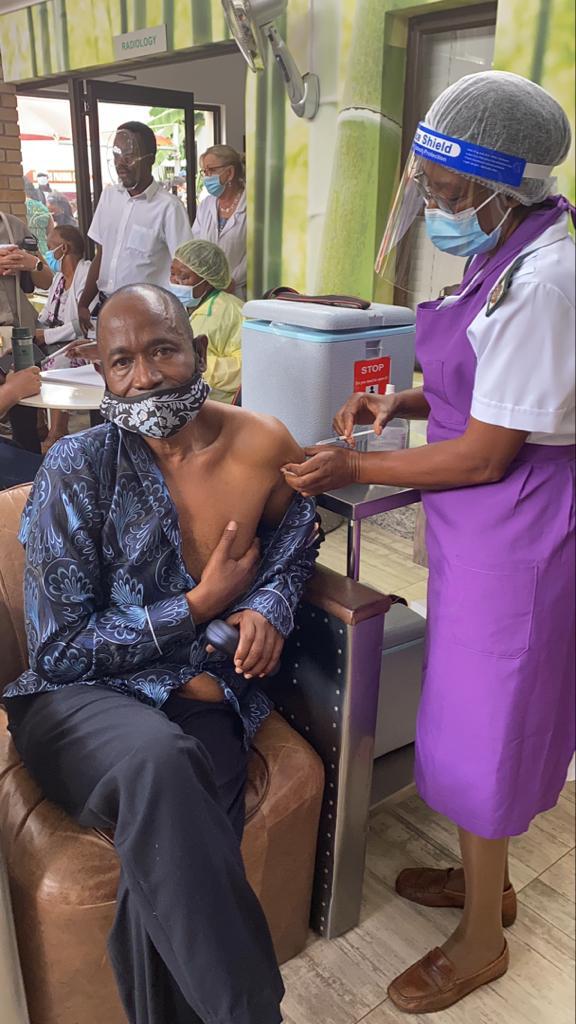 FORMER Reserve Bank of Zimbabwe (RBZ) governor Gideon Gono says while the country has relatively stood firm in its battle to keep at bay the rampaging Covid-19 pandemic, people must remain on high alert to avoid regression to the ravages of the disease seen during the first quarter of the year.

“We must remain on high alert,” Gono told The NewsHawks yesterday soon after getting vaccinated with his family at Borrowdale Trauma Centre in Harare.

“We can’t afford to relax and be complacent like we did late last year and suffered the consequences. Everyone; government, business, workers, civil society and the population in general must continue to hold the line and fight on to push back against the pandemic to save our lives, families, communities and society.”

Mnangagwa was vaccinated on Wednesday with his first shot of China’s Sinovac Covid-19 dose in the resort city of Victoria Falls where he launched the second phase of the country’s immunisation drive, as the government tries to overcome scepticism about the process within the population.

Mnangagwa’s vaccination follows that of Chiwenga who received his second and final shot of China’s Sinopharm vaccine on March 18.

Mnangagwa urged Zimbabweans to embrace vaccination as the only way to fight the pandemic and ensure the country embarks on post-Covid-19 recovery.

Zimbabwe got its first 200 000 doses from China last month as a donation and secured another free 200 000 doses, which came recently together with 200 000 bought doses.

Cumulatively, by yesterday 54 892 people had gotten their first immunisation dose, while 4 095 had their second dose.

Gono said Zimbabwe should remain in the trenches to contain, push back and hopefully defeat the pandemic.

“The Covid-19 pandemic has ravaged so many a people the world over such that anything that comes up to offer hope to either slow down or cure the disease, in the absence of a definitive cure, ought to be welcomed by anybody who values life. For me and my family, God has been very kind to keep us safe, but we cannot be complacent. God looks after those who also look after themselves and taking the vaccine is a way of looking after ourselves,” Gono said after being vaccinated.

“I’m generally sceptical about everything from the foods I eat, the water I drink and the friends I have. Some of the foods end up causing stomach aches, the water causes frequent visits to the toilet, while some friends betray you. Nothing should be taken for granted in life and that’s no different from the decision to take this or any drug from anywhere. To be born or to be alive today is to risk dying tomorrow, but live we must still try to, regardless. I don’t think that government would bring in and authorise vaccines that kill its own people. For me, it was not about whether the vaccine is Chinese, Indian, American, Russian or English. It’s about science, safety and government-approved vaccines which offer hope where nothing else known is available.”

Gono said defeating the coronavirus would be difficult as it keeps mutating and manifesting itself differently, usually in more deadly forms and variants.

“This pandemic has capacity to mutate in ways scientists are still grappling to understand. You hear of the UK variant, the South African variant, a new way in England, Italy and all over the world. The world is not safe as long as there is one of us who is a carrier of the disease,” he said.

“Therefore, I don’t believe that any nation has conquered this pandemic as yet. It seems to me that the infection is cyclical, but due to the short period we have experienced it, a discernible pattern that gives rise to comfort levels is yet to emerge. I don’t think that we are out of the woods towards flattening the curve as yet. We must remain on high alert.”

He said the impact of Covid-19 has been devastating and the ramifications serious.

“The impact of the pandemic across the socio-political and economic spheres of lives of nations and individuals has been catastrophic. For the first time throughout the world people stopped worrying about printing of money in times of emergency in favour of social needs and for welfare spending without precedent,” Gono said.

“This realism that survival is more important than nice statistics vindicated my belief that extraordinary situations demand extraordinary measures and interventions akin to what we did when the country was going through extremely difficult times during the first decade of the new millenium.

“Partisan politics and emotions aside, we had to shelve conventional economics and monetarism as we knew them to survive as a nation. We simply had no choice, even though we knew there were going to be serious consequences. In the end, we had an emergency that had to be tackled urgently and we resorted to the only available options at the time. I always wish we had other better choices, but we didn’t. We are in a similar situation now, that is in an emergency, hence governments the world over are printing money to address the situation. This is not a justification, but a reality check. We need to learn from the past to manoeuvre and manage the situation better in the present and future.”

Gono said Zimbabwean stakeholders must pull together and form a common front against Covid-19.

“At a political level, there is no doubt that the pandemic became, and still is, the elephant in the room in respect of the stability of governments, ruling parties and their leaderships. It is affecting politics, economies, governance, budgeting and spending priorities, but decisions have to made for better or worse. What is required during times such as these is unity of purpose among political players, the population at large and the international community in order to win the fight against the pandemic. In Zimbabwe, we are not faring that badly on the Covid-19 front, but we have once again witnessed the futility of trying to deal with crisis situations and moving forward in an environment of endless and pointless conflict among ourselves.”
—STAFF WRITER