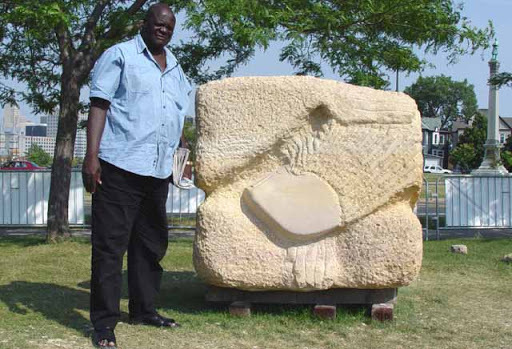 JONATHAN MBIRIYAMVEKA
Through his sculptures, it was easy to see why Takawira loved women. So passionate was Takawira about his subject that every stone, though different, portrayed women in highest regard.

Back in the days, when I was an arts reporter with The Herald around 2003 I was introduced to sculpture by the then editor Pikirayi Deketeke who took me to Celia Winter-Irving, a renowned sculpture critic.
The late Celia (may her soul rest in peace) was a great writer and enthusiastic about stone sculpture.

Her career centred around the publication of 13 internationally respected books on Zimbabwe’s stone sculpture.

However, as a published writer Celia told me she had some difficulties in writing about sculpture because as an Australian she could neither speak nor understand Shona.

So, as she showed me around the sculpture community, she told me one of the secrets in critiquing sculpture.

She said: “I’m glad that you can speak and understand Shona, that is your strength. You need to speak to the sculptors and let them express themselves fully in Shona so that you know what goes through their minds and how they feel.”

Since then, my appreciation of sculpture, in fact fine art, has gotten better over the years, thanks to Celia for her support and the knowledge she imparted in me.

During our routine visits, Celia took me to Takawira’s farm in Ruwa along Mutare Road.
Near the entrance, a huge springstone torso of a woman welcomed guests to the farm.

As you proceeded to his workplace, you would see only female figures in different forms, colour and sizes.

I quickly fell in love with his sculptures because each piece had a story to tell. Some told of sad love stories while others told of inspirational stories about women in their most fragile and feminine and strongest state.

In a book titled Spirit of a Woman: A Journey Through the Scultpure of Lazarus Takawira written by Winter-Irving and published by  Marie Imbrova, former charge de affairs of the Czech Republic to Zimbabwe, sculpture enthusiasts get a glimpse into Takawira’s life as a Christian and stone carver.

In a foreword, Titus Chipangura, the then National Arts Council of Zimbabwe’s director, described Takawira as “firstly a great sculptor whose work is comparable to figurative sculpture within longer traditions than his own. Secondly, he defies classification into any particular school of Zimbabwean stone sculpture.”

According to Takawira, each stone was made out of love. He said to me: “Young man, you should learn to love your partner. Make sure that you have that special woman in your life who you give all the love.
“Women need to be loved but then most men do not know that and this is why they abuse women.”
He was a charismatic, affable character, always in a jovial mood and generous too.

“When I drove him in a Mini-Cooper, which he jokingly thought he could not fit in, he laughed so much about it when we got back,” Benhura remembers.

Takawira belonged to the Nyanga group of sculptors which started under the guidance of the late godfather Joram Mariga.

From the late 1970s, Takawira committed himself to stone sculpture and, together with his brothers, they took a different trajectory from other artists, choosing instead the hardest of stones like marble and dolomite, while leaving much of it in its natural state.

Much more than a sculptor, Takawira did not hide his beliefs as a Christian.

“His Christian beliefs are central to his life, his relationship with Christ is one of friendship and of respect for a mentor,” wrote Winter-Irving.

Usually, he would take time off his busy schedule to preach the word of God. This, he said, made him a better and well-rounded artist. Born in Nyanga in 1952, he celebrated women through his sculptures.
His mother was a traditional pottery maker and he held her in great esteem.

Much of his career was built around the theme of the woman’s figure and he openly voiced his love for the women in his life.

A true Zimbabwean art ambassador, Takawira will be sadly missed not only in the local stone sculpture community but also internationally.

Perhaps we can derive solace from the fact that his works in private collections, international galleries and public spaces will remain for the world to appreciate.

I never thought of Zimbabwe as a haven of stability which, I finally could: Kambasha

2020: Year that turned the creative sector upside down