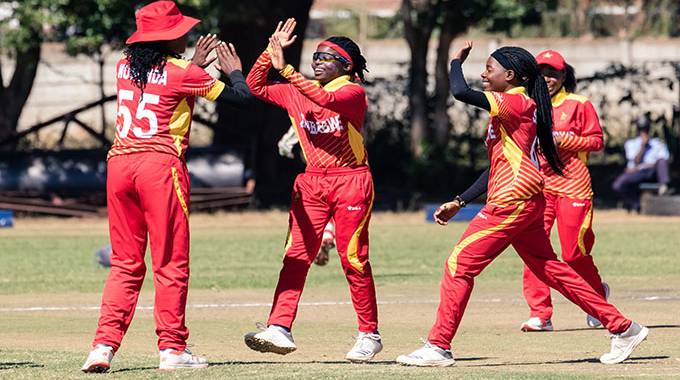 A JOURNEY of a thousand miles begins with that very first step.

And what a whirlwind trip it has turned out to be for the ladies in red!

Over two decades ago, from the dusty streets of Highfield in Harare to the hills and valleys of Dangamvura in Mutare, and the broad roads of Bulawayo.

A bunch of sprightly young women were united by an unlikely dream, to one day represent their country at the Women’s Cricket World Cup. The irony was there was no Zimbabwe women’s cricket team at that time.

But their determination and will to climb Mount Everest was set in stone! They would sow the seeds for the selection of the very first women’s national team in 2006.

Among those pioneering players was a fresh-faced 14-year-old from Bulawayo, named Sharne Mayers.

A multi-talented sportswoman, Mayers would later captain the national team and played club cricket in New Zealand and South Africa, in addition to representing Zimbabwe at hockey.

Then there were the seasoned campaigners on the club circuit: Stacey Davies, Sinikiwe “Sneeze” Mpofu, Thandolwenkosi Mlilo, Emily Jinjika, Yvonne Rainsford, among others.

Julia “Skipper” Chibhabha captained that historic first Zimbabwe Women team.
Chibhabha and Mlilo went on to make history by playing for the African Select women’s team at the Afro-Asia Cup in India in 2007.

The first Zimbabwe national team was coached by another revolutionary of the game in Zimbabwe, Emmanuel “Coach Carter” Dube, and managed by the motherly Joyce Chizano.

Their maiden voyage took them to the shores of Kenya, where they made a clean-sweep on their way to winning the four- nations regional 2009 World Cup qualifiers.

Having extensively covered women’s cricket those days for the different platforms of Zimbabwe Cricket (ZC), who I worked for in the media department at that time, I was assigned to travel with the national team on that Kenya trip, as media attaché.

The team however did not reach the Promised Land of the World at the first attempt, and the second either. Chibhabha and her team would get a reality check at the final qualifiers in Stellenbosch, South Africa, two years later.

But like the fighters they were, they dusted themselves off and lived to fight another day.
And they faced multitudes of challenges in those formative years, more like the 10 plagues of Egypt.

But they rolled with the punches, like the great Muhammad Ali did against George Foreman in the legendary Rumble in the Jungle fight of 1974.

They had no funding, they lacked international game-time, there was no professional set-up or proper preparations for tournaments. Everything was roughshod.

They rode on shoddy buses that broke down at times. For local tournaments, they were lodged in seedier places, “to cut costs”, a favourite ZC line. And yet they kept their bats straight and their eyes on the ball.

The attitude towards women’s cricket those days was summed up by one very top-ranking official of ZC. Upon the triumphant return from Kenya, when I requested to set up a Press conference at the airport, his response was a dismissive wave: “It’s just a women’s team. There will be no need for that!”

Fast forward to 2019 and a cruel twist of fate robbed Zimbabwe Women of a chance to qualify for the T20 World Cup in Australia in 2020, following the suspension of the country by the International Cricket Council (ICC) for what the global governing body of the sport deemed “political interference.”

It was a bitter pill for the ladies to swallow. However, the stakes were high, and they understood. Sacrifices had to be made for the betterment of the game.

One of the players had this to say about the whole episode: “I have worked through the poor conditions ZC has afforded us. I am not about to stand around and support people who never cared about us because it is convenient for them. I also am not going to support the SRC (Sports and Recreation Commission) because they certainly are not saints and have their own skeletons. I am doing this for the future players. For the girls coming in 10 years from now, may they never be treated so poorly again and may they get what they deserve to reach the highest level. This game has given me so many opportunities in life and has taken me all over the world. I want to be involved for as long as I can but not with the current state of things. Too many people are implicated in the corruption at ZC and they need to be called to task.”

It was only befitting that these giants of the women’s game in Zimbabwe, the ones that laid the foundations and paved the way for the current team, were there to witness history on Tuesday at Harare Sports Club when the women’s team played One-Day International cricket for the first time after being granted that status last year.

And the cherry on the top was the four-wicket win in the first ODI against the touring Ireland side, made even special by inspirational captain Mary-Anne Musonda’s brilliant century on debut.

For me, it was a touching moment to see pioneering players Jinjika and Mlilo, both now on the newly-formed national women’s selection panel, hand out caps to the present generation on the historic occasion on Tuesday.

I do not know what will happen in the rest of the four-match series against Irish women, but for now it is inconsequential.

We do not get that many moments to celebrate in Zimbabwean cricket these days, so I will celebrate this Lady Chevrons milestone for now.

Hopefully, this is the beginning of better days for women’s cricket in Zimbabwe.

*Maulgue is a former Sunday Mail sports reporter and ZC media staffer. He writes this for The NewsHawks from South Africa, where he now lives and works.

Not among Three Lions, but happy to be a Warrior