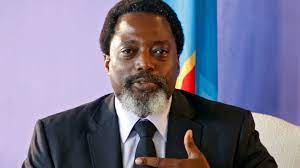 FORMER Democratic Republic of Congo (DRC) president Joseph Kabila last week flew into Harare and held private meetings with Zimbabwe’s leader amid rising tensions in the Great Lakes region, it has been learnt.

Political temperatures in the resource-rich country have risen following the murder of Italian ambassador to the DRC.

Zimbabwe has in the past been involved in a costly military intervention which resulted in catastrophic economic decline for the southern African country.

Security sources told The NewsHawks that Kabila held secret meetings with Mnangagwa this past week in the capital.

“He stayed in Zimbabwe for three days and he was staying at the Meikles Hotel in Harare. As a former leader, he got security details from the Police Protection Unit and the Central Intelligence Organisation, a source familiar with the developments told The NewsHawks.

“During his meetings with President Emmerson Mnangagwa, they discussed issues around business interest and the escalating security situation in the country.”

Mnangagwa is part of the Sadc troika. The troika of the organ of politics, defence and security includes Botswana, South Africa and Zimbabwe as the current, incoming and out going chair respectively.

It is understood that Kabila left the country late last week after his three-day stay.

DRC ambassador to Zimbabwe Mwawapanga Mwanananga could not be reached for comment as his mobile phone was unreachable. A text message sent to him was not delivered at the time of going to print.

George Charamba, presidential spokesperson, said he was unaware of Kabila’s visit, although he said he was aware of a visit by a DRC envoy.

The DRC is one of the richest countries by mineral wealth in the world, but the majority of its citizens live in poverty. It is a vast country with immense economic resources and, until recently, has been at the centre of what some observers call “Africa’s world war”, with largescale civilian suffering.

The conflict claimed up to six million lives, either as a direct result of fighting or because of disease and malnutrition.

The war had an economic as well as a political side. Fighting was fuelled by the country’s vast mineral wealth, with all sides taking advantage of the anarchy to plunder natural resources.

Last month, Luca Attanasio, the Italian ambassador to the DRC, died alongside an Italian soldier after their car was attacked as they travelled in a United Nations convoy in the eastern part of the country.

Some militias fight on in the east, where a large UN force is struggling to keep the peace.

Opposition leader candidate Félix Tshisekedi became President in January 2019 after protracted political wrangling in the wake of a controversial election.

His rival Martin Fayulu accused him of cutting a deal with the government, whose own candidate Emmanuel Ramazani Shadary finished third. Tshisekedi succeeded Kabila, who had become
president when his own father Laurent was assassinated in 2001 by his bodyguards.

Tshisekedi also came from a political dynasty, as his father Étienne was opposition leader and later prime minister under the dictator Mobutu Sese Seko in the 1980s and 1990s.

Opposition must introspect or perish