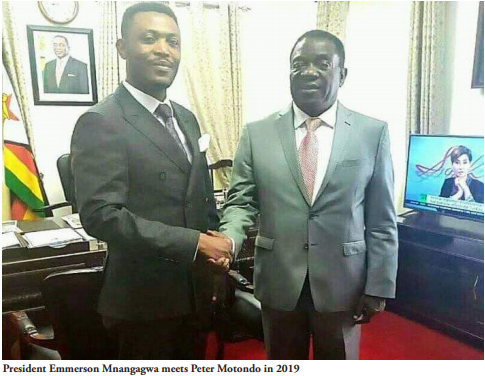 PRESIDENT Emmerson Mnangagwa used his influence as head of state to grant a residence permit to controversial Congolese clergyman and UK-convicted fraudster Charles Motondo in February despite his criminal record, The NewsHawks can report.

Sources said Motondo, who leads Grace Faith Ministries church, applied for a residence permit in Zimbabwe which was granted by the Immigration department on 3 February 2021, despite his criminal background.

The NewsHawks understands that Motondo’s application to stay in Zimbabwe was immediately granted after the Immigration department was “pressured” into processing his documents.

The Immigration department did not have reservations about Motondo’s application despite his criminal record, according to sources.

“A criminal check was done and also a police clearance, so it looks like all was above board,” a source said.

Efforts to get a comment from the Immigration department were fruitless after questions sent via email on 3 March were unanswered at the time of going to press.

Sources close to the 41-yearold preacher told The NewsHawks that the Congolese wormed his way into Mnangagwa’s inner circle after misrepresenting himself to the President that he had served in the Democratic Republic of Congo military during the civil war that rocked the country decades ago.

Zimbabwe fought in the DRC war in whose aftermath Mnangagwa, alongside other key military figures were identified in a United Nations report for being at the forefront of plundering that country’s vast diamond resources.

The two were pictured at State House in Harare in 2019 where the two held a secret meeting. Motondo’s wife was also pictured with Mnangagwa on a separate day. In a photograph provided by sources, the two are seen shaking hands.

The clergyman was convicted in the United Kingdom for fraud and money laundering and, according to a BBC article, Motondo had acted immorally.

In 2019, Motondo was convicted in the UK and sentenced to 10 months in jail for fabricating car crashes in order to claim thousands of pounds from insurance companies. According to reports, Motondo forged people’s personal details to make fraudulent claims for financial gain.

Police investigations in the UK revealed that Motondo bought policies using the personal details of two people in his congregation and then contacted insurers posing as them.

The Leeds Crown Court heard that Motondo used another person’s information to buy a fake policy with an insurance company. He later contacted insurers First Central claiming to be the policyholder, stating he had crashed his Vauxhall Corsa into a parked Range Rover and took full responsibility.

The parked car belonged to Motondo, who contacted insurers this time as himself and made a damage claim and one for the cost of a hired vehicle.

Inconsistencies were unearthed in his claim and it was nullified. This triggered an investigation by the City of London Police’s Insurance Fraud Enforcement Department after First Central raised suspicions.

The authorities also discovered he had earlier made a fraudulent claim involving his partner’s Jaguar, as well as his Range Rover.

The Range Rover had been involved in an accident and he tried to claim personal injury costs for a phantom passenger.

Investigative officer Jamie Kirk at the time said: ”Motondo was completely immoral in his actions, and had no issues using other people’s personal details to make fraudulent claims so that he could make a financial gain.”

Motondo, of Nowell Walk in Leeds, pleaded guilty at a hearing in April to three counts of fraud by misrepresentation and one count of possessing criminal proceeds. While Mnangagwa’s relationship with the clergyman remains unclear, The NewsHawks understands that Motondo also offered Mnangagwa spiritual counsel.

Efforts to get a comment from Presidential spokesperson George Charamba on the relationship between Mnangagwa and Motondo were unfruitful as his phone went unanswered. Mutondo is also on a crusade to set up base in Zimbabwe where he plans to build a large church.

He was also pampered with a government vehicle, an Isuzu twin cab. Motondo’s church website says: “He is currently in Zimbabwe where God has commissioned him to establish a big ministry.” The website states the church’s address in Zimbabwe as: “2 Liffey Vainona Zimbabwe.” Motondo reportedly has church branches in South Africa, Zambia, Namibia, Botswana, Democratic Republic of Congo, Angola, Europe and in South America.”

An unidentified personal assistant offered this reporter a one-on-one session with Motondo, who she said was only available through a formal booking.