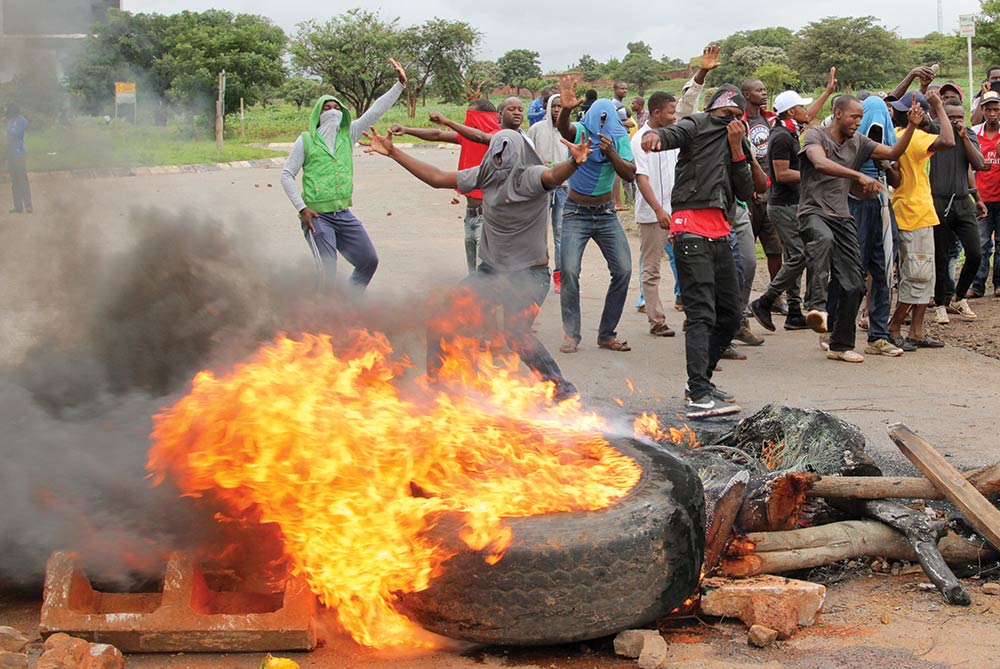 YOU do not need  to be a political scientist to realise that the election campaign season in the teapot-shaped country sandwiched between the Zambezi River to the north and the Limpopo River to the south is upon us.

For the past six weeks social media has been saturated by debate and campaigns ahead of the 26 March by-elections. Moreover, the political landscape has also been  punctuated with allies that are in full swing.

This coupled with that electoral enclaves where these by-elections are taking place are emblazoned and plastered with a colourful rainbow of campaign posters for different parties and their candidates.

The battlelines are drawn between the two arch-rivals, Zanu PF led by President Emmerson Mnangagwa and the Citizens’ Coalition for Change headed by Nelson Chamisa.

As political temperatures rise, the past two weeks have witnessed a rise in political violence. Consequently, the apocalyptic ghost of state-sanctioned terror and brutality reared its ugly head again in Chitungwiza, Kwekwe and in Harare East constituency.

This opinion piece seeks to situate these deplorable acts of politically motivated violence within the historical context of apocalyptic state-sanctioned terror and brutality that was visited and inflicted upon the social and political support base of the late founding MDC president Morgan Tsvangirai in June 2008.

The dark stormy clouds of the June 2008 repressive terror and violence are slowly gathering on the horizon as we march towards the 2023 general elections.

It is a well-documented historical fact that whenever Zanu PF is faced with a formidable political opponent, it resorts to its tried and tested tactics of  a scorched-earth policy amid violence, terror and brutality.

Even the first post-independence elections held in March 1980 were marred by widespread violence and killings. Notwithstanding the fact that Zanu PF was not in power, it still nonetheless deployed terror and violence aganist the PF Zapu of Joshua Nkomo and the UANC of Abel Muzorewa.

Both Nkomo and Muzorewa lost a considerable number of their supporters at the hands of Zanla guerillas who had violated the ceasefire agreement by remaining in villages and liberated zones without going into assembly points. They held pungwes – night indoctrination meetings – to mobilise people by coercion and violence.

The Zanla guerillas acted as shock troops of Zanu PF in repressing and intimidating the supporters and candidates of Nkomo and Muzorewa. As a result, both Nkomo and Muzorewa could not campaign in Mashonaland and Manicaland political heartlands.

This was one of the reasons Lord Soames, the last governor of Rhodesia, and the Commonwealth Observer Mission contemplated to ban Zanu PF from participating in the 1980 general elections. However, the political costs of banning  Zanu PF were so enormous that it would have triggered another bloody civil war.

But then that sowed the seeds of a Zanu PF political culture of violence, terror and killings in independent Zimbabwe. Nkomo and PF Zapu were again subjected to another episode of state-sanctioned genocidal and ethnocidal repression known as Gukurahundi between 1982 and 1987, with the ultimate goal to decapitate and annihilate the socio-political support base of PF Zapu for Zanu PF to institutionalise and legislate a de jure one party.

The next political player to be subjected to this same terror and repressive tactics was Edgar Tekere and his Zimbabwe Unity Movement (Zum) political party. Tekere and Zum’s political  crime was that in 1990 they had dared to challenge and scupper Zanu PF plans of institutionalising a one-party state hegemony in Zimbabwe.

Zum was subjected to violence and intimidation, with the firebrand Patrick Kombai, who was the frontrunner in the Gweru Urban parliamentary election, pitting him against the late vice-president Simon Muzenda. Kombai survived an assassination attempt after he was brutally shot by Central Intelligence Organisation operatives and left for dead.

Fast forward to the turn of the millenium, the MDC and Tsvangirai became justifiable fair game to be brutalised and terrorised into submission at the hands of the Zanu PF regime.

Throughout the first decade of the 21st century, the MDC had a  great number of its cadres extrajudicially murdered and terrorised by the Zanu PF government repressive machinery and personnel.

The June 2008 presidential election runoff will be vividly remembered as the period when Tsvangirai and the MDC-T paid a heavy price for defeating Mugabe and Zanu PF in March that year. During that period it became an open killing season with impunity for Zanu PF supporters acting in cahoots with the military.

There was blatant and wanton militarised state-sanctioned terror and brutality that resulted in more than 200 deaths of MDC supporters, including Tonderai Ndira who was brutally murdered.

This historical anthology of  systematic episodes of state-sponsored terror and violence is essential in order to fully contexualise the dark stormy clouds of political violence that are slowly building up on the horizon.

The emergence of the CCC as a formidable political force has inevitably scuppered the authoritarian Zanu PF government’s plans to establish a de facto one-party state propped up by their trojan horse MDC-T/MDC-Alliance led by Douglas Mwonzora.

Because of the robust electoral and political clout of CCC leader Nelson Chamisa, the CCC automatically put itself on a collision course with the  Zanu PF repressive machinery in circumstances similar to those that confronted PF Zapu,  Zum, MDC and now the CCC.

It is not by accident but rather by design that we are witnessing state-sanctioned brutality and repressive violence being deployed against both the leadership and rank and file of the CCC.

The licence to kill and brutalise  the CCC with impunity was issued by Vice-President Constantino Chiwenga during a recent Zanu PF Kwekwe rally. At that particular rally, Chiwenga, like a loose cannon and a political arsonist, recklessly told the Zanu PF supporters in genocidal terms that the CCC would be crushed like lice. This is particularly disconcerting,  considering the traumatic history of Gukurahundi and Rwandan genocide.

The same dehumanising and infrahumanising language was deployed aganist the Ndebeles and Tutsis respectively.

Consequently, it was not a surprise that soon after the incendiary and inflammatory  utterances by Chiwenga, a young CCC supporter, Mboneni Ncube, was extrajudicially  hacked to death  and 23 other supporters of the party hospitalised with gruesome injuries after being attacked by the machete-wielding Zanu PF thugs.

Moreover, there was also an image of the CCC supporter in Chitungwiza with a gushing knife wound in her head. Her only crime was holding alternative political views in support of the CCC. This pattern of state-sanctioned brutality undergirded by impunity is continuing unabated with increasing boldness and ferocity.

In the early hours of the morning of 3 March 2022, a four-man  gang wielding machetes and guns raided the home of the CCC deputy president Tendai Biti, who is also a parliamentary candidate for the Harare East by-elections.

The four gang inflicted deep cuts and gruesome wounds on Biti`s security guard who was left for dead. Prima facie this did not look like an armed robbery gone wrong since no attempt was made to steal anything. Circumstantial evidence points to a systematic politically motivated attack designed to intimidate Biti and others. This came hard on heels of a series of acts of violence and intimidation against the CCC.

However, what is particularly concerning and worrying is the fact that machetes were used to inflict the death of Ncube and grievously injured Biti’s security guard. This is due to the fact that the machete was the same weapon of choice which was used to inflict genocide at an industrial scale in Rwanda aganist Tustis and moderate Hutus.

It is gradually becoming abundantly clear that the dark  storm clouds of apocalyptic state-sanctioned violence against opposition political movements, particularly the CCC, are incrementally building up within the political and electoral sky of Zimbabwe.

There is increasing danger as we approach the 2023  general elections that the political sky of Zimbabwe will be overcast and fully enveloped by darkness.

Related Topics:2008 electionsElectionsViolence
Up Next

Who wants to stop the by-elections?

Will there be nuclear war because of Russia’s invasion of Ukraine?