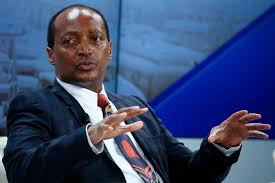 IF progressive minds are applied, Patrice Motsepe should be the next man to lead African football into a new future.

The suave South African billionaire will contest for the presidency of the Confederation of African Football (Caf) at the body’s general assembly meeting in Morocco on 12 March.

Motsepe’s résumé is the epitome of human endeavour, acumen, will, and achievement.

A tycoon of note, Motsepe has managed to replicate business world success in the sporting industry.

The self-made magnate is the owner of Mamelodi Sundowns, the South African football team he has remarkably transformed into his country’s most decorated club in the new Premier Soccer League era.

Who else, then, fits the mandate of driving African football into a future of growth and prosperity better than a business tycoon with an amazing track record in both commerce and sport?

At first glance, the names of the other candidates vying for the biggest job in African sport would give the impression that Motsepe is the clear favourite to land the post.

Now, these are not glamorous global personalities, like Motsepe. But one thing is sure: they are no nonentities.

The terrain of African football is in fact their playground. They know the language of the game on the continent.

Such men have been lurking around for a while in football politics on this continent, waiting for opportunities and meanwhile creating opportunities for others.

They are political animals in the trenches of African football. They know people who matter, where to find them, what they desire, and what to promise them.

Motsepe’s opponents have efficiently operated in the background for a sustained period – engineering electoral victories for others in regional confederations, at Caf, and in Fifa.

Having created their own clout over the years, it is now the turn of the kingmakers to seek African football’s highest office.

All four men in the running for the Caf presidency have their different power bases.

For Motsepe, one of these is the southern African part of the continent.

This group is represented by the regional body, the Council of Southern Africa Football Associations (Cosafa), headed by Zimbabwe’s Phillip Chiyangwa.

This is the second time in just over two years that Cosafa, under the leadership of the brusque Chiyangwa, has sought to collectively back a South African in an election for a crucial post in the game.

In September 2018, all members of Cosafa – save for one – publicly threw their weight behind seasoned South African football administrator Danny Jordaan for a vacant African position on the all-powerful Fifa Council.

Malawi was the one not to join in, because the country’s own national football federation boss, Walter Nyamilandu, was also in the race for the much-desired position within Fifa.

The Chiyangwa-led bloc, with a commanding tone, had tried to arm-twist Nyamilandu into withdrawing his candidacy in order to rally behind a single candidate from the region, Jordaan.

The former Malawi national team player ignored the veiled threats and arrived at the Caf extraordinary meeting in Egypt as a candidate.

The Malawian dark-horse, justifying his defiant stance to contest the election, defeated the highly fancied Jordaan in the second round of voting for the coveted seat on the politburo of world football’s governing body.

On 12 March, North Africa will again play host to another important election for the game on this continent.

Not this time around: this will be the battle cry of the Cosafa bloc and its allies across the continent.
There is still something, though, to give this coalition some sleepless nights.

It has been whispered in the corridors of football that Malawi, for a second time, is not throwing in its lot with Cosafa’s chosen candidate.

Well, it is just one vote slipping away, you could say. But there is more than meets the eye.

The real issue playing out, if the whispers have any truth as we believe, is that it is payback time for Nyamilandu, a man whose influence in African football politics was hitherto underestimated.

It therefore hints that the candidate Malawi is supporting belongs to the greater alliance that swept Nyamilandu to victory against Jordaan in the 2018 Fifa Council vote.

It will certainly mean that Nyamilandu, a Fifa Council member, will be a key factor.

in this election. Assuming that the Nyamilandu winning team of two years ago is still intact, and that the voting pattern of 2018 will be maintained, Motsepe will find himself on the backfoot.

The South African mogul’s backers sure have their work cut out for them as we enter the home stretch.

My parents said I was a ‘mistake’: Vermeulen

HawkZone: It cannot be business as usual with our football from here on