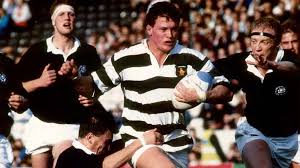 WHEN rugby’s World Cup was staged on African soil 26 years ago and for the first time in these parts, it was quite conspicuous that the only nation from this continent to have taken part in all previous editions of the tournament was noticeably missing.

Zimbabwe had played in the inaugural World Cup edition in Australasia in 1987 – as one of nine specially-invited teams – before winning a newly-launched African qualification competition three years later to clinch a place at the 1991 tournament in Britain and France.

South Africa’s transition to democracy in the early 1990s, and subsequent end of sporting sanctions, would see them play in the Rugby World Cup for the first time, as tournament hosts in 1995.

With one other team from the continent assured of a place at the tournament via the qualification process, none would have dared bet against the South Africans’ neighbours, Zimbabwe, being the second side in that tournament.

And what a momentous occasion it was going to be for the Sables to play in their third successive World Cup, just across the Limpopo River, where a strong Zimbabwean expat community was sure to turn up at the stadiums in large numbers and provide quite a spectacle to the historic tournament.

As it turned out, it was a nightmarish qualifying campaign for Zimbabwe who for the first time did not play in the World Cup–and never have since then.

The African qualifying team for that World Cup was not Namibia, who to this era have dominated that slot. It was, interestingly, surprise package Côte d’Ivoire, who went to the World Cup in South Africa, where they lost all three group matches heavily.

For Zimbabwe, the disappointment of not playing in that World Cup is a distant memory now. But it does not at all make the memories less sad.

Not least within a group of players who already knew how it felt to be at the World Cup, and were eager in 1995 to relive the unbelievable experience of the tournament again, closer to home this time around in front of family and friends.

Dashing winger Elimon “Bedford” Chimbima was a member of Zimbabwe’s 1991 World Cup squad, playing in one pool match against Scotland in the African side’s 51-12 defeat at Murrayfield in Edinburgh.

After that, Chimbima was part of the side that then failed to qualify for the 1995 tournament, a “massive disappointment” according to the former Zimbabwe flier, who is now 52 and lives in the United Kingdom.

“With the (1995) tournament in South Africa, it would have been ideal, and an opportunity for our supporters as well as the country in general,” Chimbima tells The NewsHawks this week.

“The country would have benefitted, not only on the playing side but in business.”

Chimbima did not make the trip to the Ivorian capital city Abidjan in 1994 for the fateful match in which the West African side pulled off a shock win over Zimbabwe to qualify for the 1995 World Cup.

“They (Côte d’Ivoire) made sure all their players plying their trade in Europe, particularly in France, were all available for the tie,” remarks Chimbima.

“Personally, I didn’t travel with the team as I had just recovered from an injury, so I wasn’t fit enough to compete at that level. But speaking to my teammates, there was frustration over how the delegation was treated, which just made the whole trip a nightmare. Also, never having toured West Africa before, I think it disadvantaged us as we didn’t know what to expect.”

Shurugwi-born Chimbima – who grew up in Harare’s Dzivaresekwa township and learnt his rugby at Ellis Robins Boys High School – was one of only five players of colour in Zimbabwe’s `91 World Cup squad, a side under the guidance of head coach Iain Buchanan.

Two of the non-white Sables in that World Cup, Richard Tsimba and Milton Nyala, are late, both having died in car accidents in a space of two years at the turn of the millennium.

Chimbima particularly has fond memories of the world-class talents of international Hall of Famer Tsimba, a veteran of the first two World Cups, and the only black player in the entire inaugural tournament in 1987.

“Richard Tsimba was already a household name after his exploits in the 1987 World Cup,” Chimbima speaks of the late ex-Sables star centre.

“I played with Richard both at club and national team level and if you speak to anyone who played alongside him, they will tell you it was not just his scoring abilities, but the ability to create space for others, which made him a special player. Our World Cup team of 1991 also had other very good players like Andy Ferreira, Brian Currin, Mike Letcher, Brenton Catterall, Honeywell Nguruve, Chris Botha, Adrian Garvey, Brendan Dawson, Milton Nyala, just to mention a few. It was such an honour to play and be in the same changing room with such excellent players.”

Dawson, an ex-national team captain, is currently Zimbabwe’s coach, tipped by `91 World Cup teammate Chimbima to guide the Sables back to the Webb Ellis Cup stage for first since in three decades.

Related Topics:Zimbabwe Rugby
Up Next