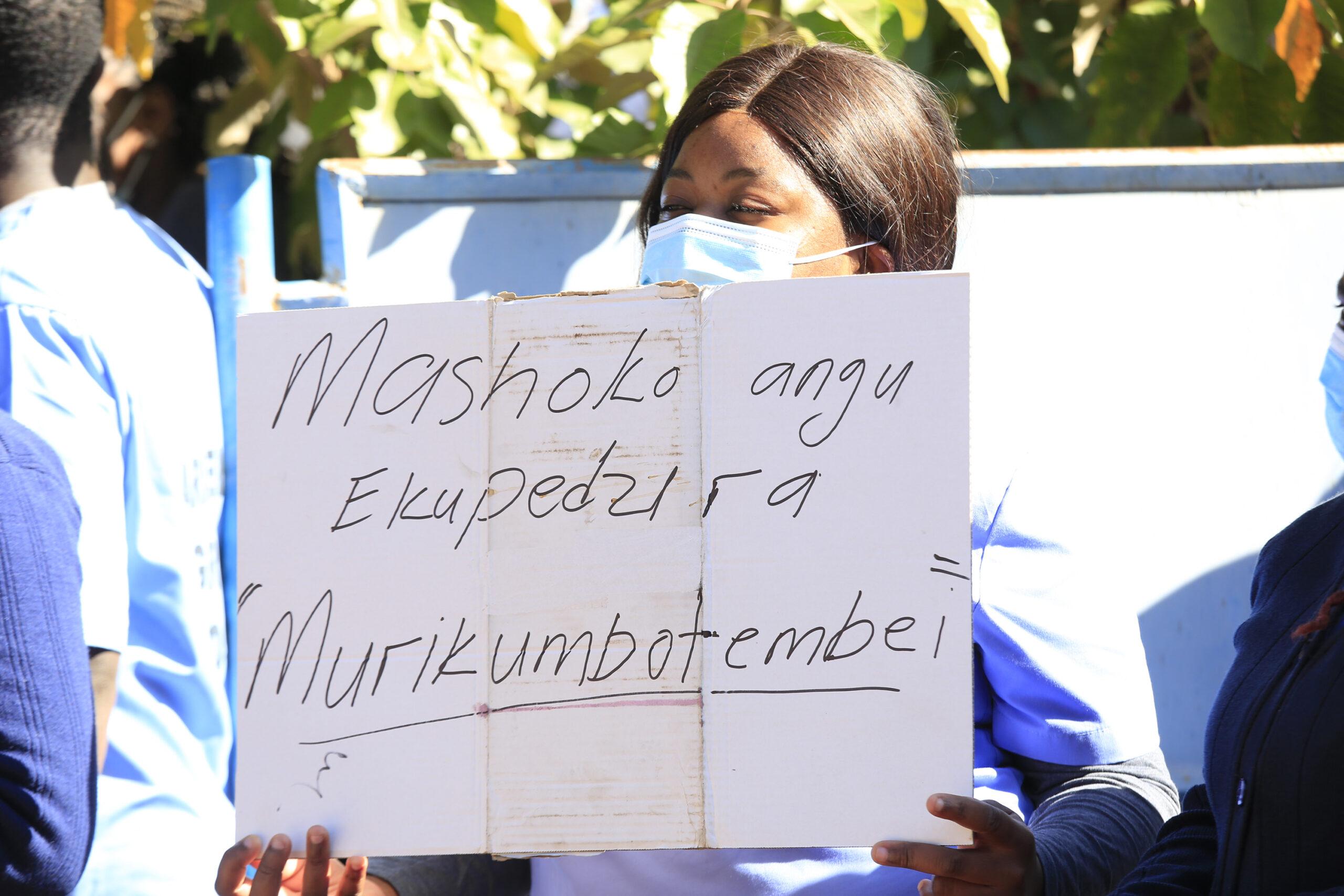 Nurses and other health workers stage a protest at Parirenyatwa Hospital in Harare,Zimbabwe,21 June 2022.The workers and others countrywide are demanding better working conditions and a salary increase.

THE Health Service Board (HSB) has refused to meet striking health workers for the past 14 months, with union leaders accusing the Paulinus Sikosana-led body of displaying arrogance in ignoring the plight of medical professionals.

Zimbabwe was this week plunged into another health catastrophe when hundreds of nurses and doctors went on strike to demand better pay and the provision of essential medicines.

But at the centre of the controversy is the HSB which, according to Zimbabwe Nurses’ Association (Zina) president Enock Dongo, has ignored seven letters written by workers expressing displeasure over salaries.

“We are going to lose lives. People are going to die because of the arrogance and lack of the rule of law which is being practiced at

ministerial level. They are very arrogant. The Health Service Board has refused to meet us for the past 14 months and they never responded to about seven letters sent to them. This is the last resort, to declare incapacitation,” Dongo said.

At Sally Mugabe Hospital in Harare, health professionals marched in the main car park, some wielding placards inscribed with messages of discontent while others just sat in solidarity.

Their counterparts at Parirenyatwa Hospital picketed outside the HSB offices and delivered a petition.

Amid all the disgruntlement, the HSB has neither commented on the salary issue nor convened a meeting.

On Monday, Dongo was summoned by the ministry of Health to explain the rationale behind the strike, but no meaningful outcome was achieved, according to the union leader.

“They wanted to ask me what our demands were. It was shocking because they already know what we want. So the strike continues until we have a positive answer,” he said.

Asked why the board had failed to meet workers, Sikosana said: “I have no comment on that.”

Deputy Health minister David Mangwiro, who is facing the fire alone while his boss Vice-President Constantino Chiwenga is on honeymoon, said he does not comment on labour issues.

“I do not get involved in employment issues. I am a policymaker. It is difficult to comment on anything,” Mangwiro said before assuring this reporter that he would reach out to Sikosana.

The healthcare workers’ strike was also conspicuously absent from the cabinet briefing, widely circulated to journalists.

The government could have conveniently chosen to ignore the issue in a well-calculated bid to discourage the striking health workers, an observer said.

However, amid a crippling strike, the government maintains the 100% salary offer remains.

“I cannot comment on ongoing negotiations and details between civil servants and government as yet … As government, we are sensitive to the plight of all the civil servants and we will do whatever we can to make sure we can accommodate the demands, obviously within the budgetary constraints we face,” Ncube said.

“As you know, the government is offering US$175. So on that part, we have already shown we are willing to make sure that part of the salaries is in United States dollars, but as to the recent request from civil servants, all those things are under consideration, under discussion.”

But this week health workers vowed to only go back to work when they are paid in US dollars.

“The salary that the health workers received last week was pathetic. The majority received 20 000 Zimdollars, which is US$60. To expect someone to live on that is just a mockery,” Dongo said.

Health workers are demanding US$540, which was the minimum salary before the government introduced the local currency in 2018.

“100% of nothing is nothing. It’s not even closer to what we expect. The health workers are expecting an equivalent of US$540 which we used to get before 1 October 2018. That is the salary we demand,” he said.

Zimbabwe’s inflation jumped to 131.7% in May, a grim echo of the hyperinflation that wiped out savings and salaries in 2008.

On Tuesday a top health official was hackled by nurses at Parirenyatwa after driving a brand-new luxury car bought using taxpayer funds.

The HSB recently defended the purchase of the vehicles in Parliament.

But health workers questioned the morality of buying new cars amid a restive health sector.

Health professionals, who were forced to abort a strike last year after Chiwenga threatened to fire thousands, vowed to continue the fight for better pay.