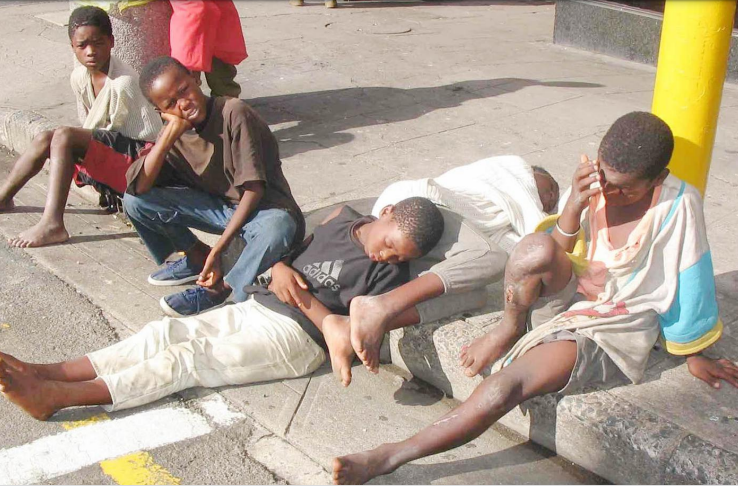 BUFFETED by the cold weather, Rudairo Rezende (19) realises that this is a war he must win, but the battles he must overcome seem way too enormous for his little strength.

Amid frigid temperatures, Rezende has to battle for comfort and territorial control while also scavenging for food. Life on the streets of Harare is normally hard, but in winter Rezende and other homeless people in his situation, have to tackle a formidable foe, by way of hostile temperatures.

To homeless people of various ages, winter poses existential threats. The weak and vulnerable do not survive. For females, the dangers are more pronounced. It is very common that female street kids are kidnapped and beaten up or even sexually abused by males seeking warmth and comfort in these chilly times.

Desperate to remain alive, many are forced to cover themselves with cardboard boxes. Even those who do not necessarily get along are forced by the cold to sleep cuddled together. But this has its iwn dangers; rape and sodomy are common.

“We sleep at around 11pm because at that time there will be a few people walking and driving around town up to 3am. But during this time, it will be extremely cold. The cardboard boxes are not enough. In this kind of weather, there is no substitute for blankets,” Rezende said.

“When we wake up, the search for cardboard boxes begins. The search continues until we sleep because we need them at night to cover ourselves and also to light fires for warmth. If you are not diligent you will find nothing because other groups would have collected before you.

“Some groups fight over cardboard boxes during this time because there are bullies and gangs that are militant enough to personalise everything for their own benefit and willing to fight anyone who stands in their way.

“They call themselves zvibaba (godfathers) and we feel their presence in winter when the fight for warmth takes centre stage. It becomes messy.” For 25-year-old Vimbai, a mother of a two-year-old boy, winter evenings are usually unbearable and the anguish long. She cannot keep up.

The twin struggle against the winter chill and gratuitous violence is worsened by the economic crisis. Getting food is difficult. Henry Chigama, founder and chief executive officer of EatOut Movement, an institution which donates food, clothes, blankets and other necessities to homeless people, says the organisation has no resources to cater for all children in the streets.

“Year in and year out we carry out what we call winter warm-up, which is a campaign that raises blankets, hats, socks, jackets, warm clothes and we distribute to the homeless just to protect them from the cold,” he said.

“But this year we did not hold the winter warm-up. What we have done is we have got a group of people that we have taken and helped to get off the streets and we are helping them to pay rentals and buy food until they are able to look after themselves.”

He said their usual assistance has been hampered by the Covid-19 pandemic.

The number of children living on the streets of Harare continues to increase, with many fleeing their homes for various reasons, including sexual, physical and emotional abuse as well as economic hardships and child delinquency.

Related Topics:HarareStreet kids
Up Next

Nssa: Robbing the struggling poor to give the corrupt rich