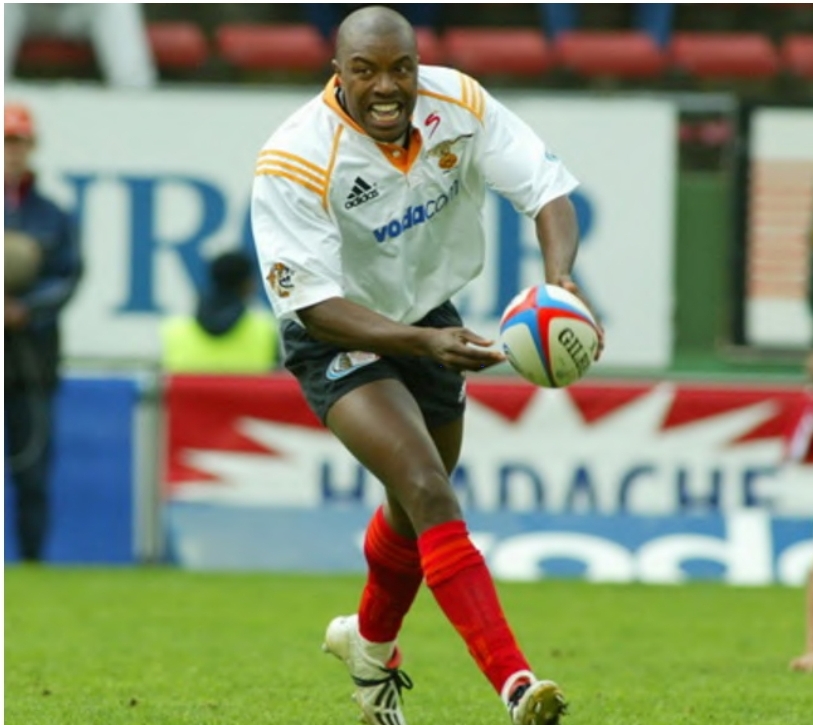 WORLD Rugby Hall of Fame inductee Kennedy Tsimba (pictured) has revealed his misgivings about the newly relaxed player eligibility regulations in international rugby, lauded by other prominent figures in the sport as a game-changer.

According to Zimbabwe-born Tsimba, one of the best players in the world in his time, the ruling – which means that a player is now able to represent a different country after a waiting period of three years – will monetise international rugby and considerably lower the sense of patriotism at that level of the game.

“All it does is encourage a financial bidding war for players,” Tsimba told The NewsHawks this week. “Players will opt for wherever they can cash in the most, which is good for some of the players I guess.”

The former Free State Cheetahs and Blue Bulls flyhalf, who was the first black player to captain Zimbabwe’s rugby team, fears that the essence of Test rugby – pride in representing one’s country – will be diminished to a certain degree.

“National commitment falls away because it will become more about contracts and availability for national teams,” said the fleet-footed playmaker of a bygone era.

Under the new law, which comes into effect in January, a player must prove family roots in the new country they intend to represent, 38 months after last turning out for a different nation.

The new regulations are being widely seen as a significant shift in the game, particularly in the second-tier and third-tier countries of world rugby, who view the ruling as a major step in bridging the gap between them and the top rugby-playing nations on the planet. World Rugby, the governing body of the sport worldwide, say the change will “benefit players and the global competitiveness of rugby.”

The Pacific region looks all set to be the biggest beneficiary of this revolutionary change in the game’s qualification rules, and, as expected, excitement has taken over the stage in that rugby-mad part of the world following the announcement a fortnight ago.

Thousands of top-class rugby players with connection to the islands, by birth or heritage, perfected their skills in the structures of New Zealand and Australia – with many going on to play and excel at the highest level of the game for the All Blacks and the Wallabies.

With this latest eligibility reform, it will become a lot easier for such players to represent the land of their forefathers at the pinnacle of the game.

Already, anticipation is high that one of the game’s global superstars of the modern era, Israel Folau, will likely return to the international fold in the colours of Tonga – his ancestral land – after his central contract was terminated by Australia in 2019 over anti-gay comments he posted on social media.

As for Tsimba, the 47-year-old’s unfavourable stance towards law changes is probably understandable. He was previously affected by it at a very important stage of his playing career.

22 years ago, when it seemed odds-on that the phenomenal Cheetahs number 10 would finally play for South Africa, the rules – which hitherto permitted players to switch allegiance after a period of four years – were suddenly changed by the then International Rugby Board (IRB).

Having last played for Zimbabwe in 1998, Tsimba was in line to become the first black Springbok of Zimbabwean origin. He was set to qualify as a Bok in 2002, just a year before the World Cup in Australia, for which he would have been a certain selection in coach Rudolf Straeuli’s squad.

Tsimba, up to this day, is convinced that external pressure was brought to bear on rugby’s global ruling body to halt a trend that some hardcore traditionalists in the game deemed undesirable: players swapping nationality.

“Well, I don’t think it’s correct to keep moving the goal posts whenever there is a bit of social pressure. What was the reason in the first place that they changed it in 1999?” Tsimba asked.

“Yes, they (IRB) told me under no circumstances at that time…and now they’ve changed their tune. Two World Cups passed in that period where I had to sit at home while my colleagues went to win a World Cup (South Africa won its second World Cup in 2007). They forgot that it’s one’s livelihood, and it affects the rest of your professional journey.”

In addition to players changing national teams within a period of three days, previous restrictions which made it complicated for players who had been in the set-up of a country’s second official team to be swiftly capped at Test level by a different nation, have also been lifted.

Meanwhile, despite his disapproval of the new law, Tsimba – who spent a season in his young days with Bath in the United Kingdom Premiership in 1997-98 before bursting onto the South African scene with enormous success – said his native Zimbabwe also stands to benefit handsomely from the new rules.

“It will help Zimbabwe in obtaining young players more easily as the fear of not being able to represent other countries is no longer there,” said Tsimba, who is now head coach of University of Pretoria’s second team. “You can try different options and not sit with a rule of one country in a lifetime.”

Zimbabwe are hoping to return for the Rugby World Cup for the first time since 1991. The Sables will need to win what will be a tightly-contested African qualification tournament in France next year to clinch the sole spot to the World Cup in the same country in 2023.

Is it all over for Felton Kamambo and Co?