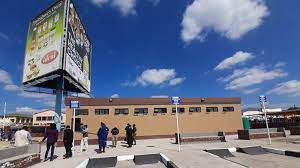 A PRIVATE company contracted by the City of Gweru to refurbish Kudzanai Bus Terminus has courted the ire of vendors after it hiked bay fees by over 100% at a time the informal traders are reeling under the economic effects of the Covid-19 lockdown, The NewsHawks can report.

Bentach Resources last year won the tender to renovate the long-distance bus terminus, as well as vending stalls housed at the rank as part of a “smart city” concept enforced by the government during the first Covid-19 lockdown which began in March last year.

As part of the contractual agreement, the company was supposed to collect fees from informal traders and bus operators to cover its costs but, in a surprise move, Bentach last week announced that it would increase fees beginning Monday owing to the tough economic environment in the country.

The Midlands provincial capital, like most cities and towns across the country, is largely a vendor economy and informal trading is considered a major source of livelihood.

“Please note that the bay fees will increase as of November 1 2021,” the company notified vendors.

“The new rentals shall be as follows, perishables ZW$400 a day, merchandise ZW$480 a day and hardware ZW$800 a day. This has been necessitated by an increase in our Bentach Pricing Index that takes into account micro-economic factors.”

The increase will see vegetable vendors forking out ZW$12 000 per month, those trading in merchandise products ZW$14 400, while those dealing in hardware products pay ZW$24 000 at the end of each month.

The Gwery chapter chairperson of the Zimbabwe Chamber of Small to Medium Enterprises, Tafadzwa Mazorodze, told The NewsHawks that the new fees are exorbitant and a huge burden on already struggling vendors who are still feeling the full impact of prolonged Covid-19 lockdowns.

“Where would people selling vegetables get such an amount of money to pay as fees? What business is there at Kudzanai to warrant such an increase? These informal traders have to face competition from illegal vendors who are selling everywhere in town.”

Mazorodze said city residents could not rule out suspicions that the company intended to give vending bays to people coming from outside Gweru whom he alleged were well connected to the company.

Gweru Hawkers and Vendors Association chairperson Lovemore Tingaka said the hike in fees was “retrogressive to the survival of struggling informal traders”.

“When people expect informally employed people to fork out more than the salary of those who have formal jobs, you wonder where the poverty alleviation concept is. This is just a move to punish poor citizens,” he said.

Several vendors who spoke to The NewsHawks said the increase was a shocker as families are already struggling to survive.

“We are already struggling with paying council bills, school fees, transport, putting food on the table and now we are heavily taxed for operating in council space,” Precious Moyo said.

Bentach project manager David Kudakwashe could not be reached for comment.

Some vendors operating at the bus terminus said they would be forced to abandon the market and join those operating illegally on the streets.

Gweru has a waiting list of more than 5 000 vendors anxious for licences following the collapse of industries in the Midlands capital.

‘Mnangagwa must not contest the 2023 presidential election’