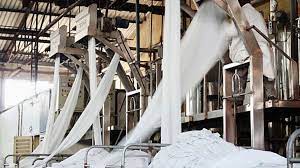 A STROLL in the heavy industrial zone of Gweru, the Midlands capital, leaves one with the impression of a strangely serene atmosphere.

STEPHEN CHADENGA
The quiet surroundings can be mistaken for a laidback picnic venue, something not synonymous with an industrial area. Ordinarily, the place should be a hive of activity, characterised by the sound of machinery with smoke billowing above the rooftops.

A visit by The NewsHawks to the industrial zone on Sunday was an eye opener. The soothing sound of church melodies wafted from huge, dilapidated buildings. The giant chimneys that used to discharge smoke now churn out religious hymns and prayers.

This is what a city which used to be the heartbeat of central Zimbabwe has been reduced to. Residents have converted factories into churches which they flock to every Sunday to ironically pray for jobs and economic salvation.

On week days, the area resembles a ghost town. It certainly can be a perfect setting for a horror movie, but this is an area which used to be home to thriving companies such as Zimcast, Fort Concrete, Radar Castings, Kariba Batteries and David Whitehead. The firms have shut down in the past two decades, rendering thousands of workers jobless.

But enterprising religious organisations have spotted an opportunity and are now using these once economically productive buildings for church meetings.

“The rentals in the industries are a bit favourable and that is why you find us here,” said Josphat Muroyiwa, who attended a service by charismatic preacher Walter Magaya’s PHD Ministries last Sunday on premises that used to house Cembee furniture manufacturers.

Cembee used to employ hundreds of people who made quality furniture, but the building located behind Dairibord is now home to PHD Ministries’ Gweru church. The branch has 78 members and gets weekly visitors who are greeted with a huge banner emblazoned with Magaya’s portrait. Congregants take turns to worship as they endeavour to adhere to Covid-19 regulations.

This conversion of factories to churches in Gweru has given policymakers a lot to ponder in a country grappling with chronic high unemployment.

“Although as a local authority we have facilities that can be hired by various organisations including churches, most churches however prefer to take space in the closed industries as they are cheap and affordable,” said Gweru mayor Josiah Makombe.

“We also used to collect revenue through rates when the industries were fully operational, but now the situation has changed.”

“The remaining companies are operating at extremely low capacity and the majority of them have retrenched workers in the past few years,” he said.

According to a recent ZCTU report, new players in the industry operating at full capacity included Chinese companies such as Jin An, Xin Yu and Nelson Holdings.

Over the years, the government’s promises to resuscitate the city’s industries have come to nought as the harsh economic environment continues to repel investors.

In 2014, the then MDC Gweru Urban legislator and former local government deputy minister in the Government of National Unity, Sesel Zvidzai, announced plans for the Gweru Industry Revival Initiative. It was aimed at reviving major companies that used to anchor the city’s economy and employ thousands of people.

Seven years later, the idea is still pie in the sky. The factories in the Midlands capital have morphed into churches where long-suffering citizens flock to every Sunday to seek succour from unemployment and poverty.