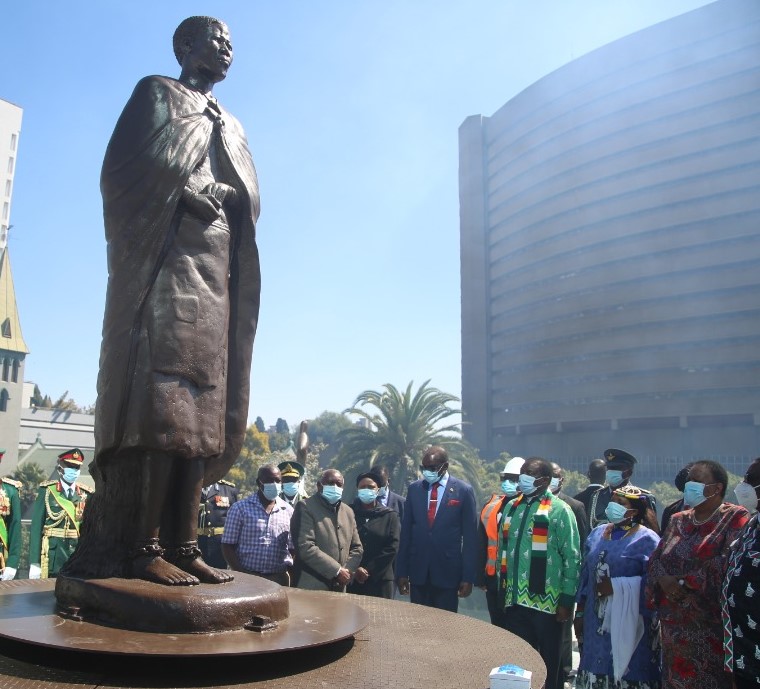 WHILE President Emmerson Mnangagwa was receiving praise from some quarters on Tuesday after unveiling the Mbuya Nehanda statue in Harare, his role in the Gukurahundi genocide was being brought into sharp focus.

LIZWE SEBATHA
There was a sombre atmosphere at Bhalagwe, in Matabeleland South province, where survivors of the atrocities and their families demanded redress from Mnangagwa as he celebrated the unveiling of the Mbuya Nehanda stature as victory against colonialism.

Victims of genocide were tortured, killed and thrown down mine shafts by the North Korean-trained Fifth Brigade. Some of them lie in unmarked graves.

Nehanda Charwe Nyakasikana, also known as Mbuya Nehanda, was a spirit medium instrumental in the First Chimurenga uprising. She was hanged by the colonial settlers on 27 April 1898.

The pressure group Ibhetshu LikaZulu led a delegation to Bhalagwe for a memorial service and installed a plaque in memory of the countless Gukurahundi victims who are buried in mass graves and in mine shafts.

The plaque was destroyed and stolen on the same night, for the second time in a row, following the 2019 incident.

Earlier that day, police from nearby Maphisa growth  point had tried to prevent the Gukurahundi memorial service from proceeding. The police later relented, but on condition that no more than 50 people could allowed to attend in compliance with Covid-19 restrictions on public gatherings.

Incidentally, Mnangagwa was presiding over a public event where the same Covid-19 restrictions were not enforced as scores of Zanu PF supporters marched and danced in numbers in celebration of the Mbuya Nehanda stature.

“We will make sure that the plaques are there and those who don’t want will have to get used to them. Our simple message to Mnangagwa is that our calls and cries for Gukurahundi redress will not be silenced no matter how many times they destroy the plaques,” Fuzwayo added.

Fuzwayo says they hold the state accountable for the destruction of the plaques.

In attendance during the unveiling of the plaque were Chiefs Mathema and Fuyane, MDC Alliance deputy president Welshman Ncube and Gukurahundi survivors and their families.

Mnangagwa, who played a central role in the Gukurahundi genocide, was State Security minister at the time the brutal soldiers terrorised communities in the Midlands and Matabeleland, killing an estimated 20 000 civilians.

At a rally held in Victoria Falls on 5 March 1983, Mnangagwa was quoted by the state-controlled Chronicle threatening to unleash untold violence on citizens he likened to “cockroaches and bugs” that needed DDT pesticide. Dichloro-diphenyl-trichloroethane is banned.

Mnangagwa once told the public to openly discuss Gukurahundi, but there has been little movement towards finding a lasting peace-building solution to the emotive issue, with victims accusing him of insincerity.

At one time, exhumations and reburial of Gukurahundi victims were allowed to proceed as part of a process to find closure on the emotive issue.

This resulted in the exhumation and reburial of Justin Tshuma and Thembi Ngwenya in Tsholotsho’s Enkwalini community in 2019 who were killed by the Fifth Brigade in March 1983. Bulawayo-based Ukuthula Trust, an independent body of forensic archaeologists and anthropologists conducted the exhumations.

However, further exhumations were abruptly stopped after the government said enabling legislation had to be put in place to guard the process.

The National Peace and Reconciliation Commission has said it is laying the groundwork for exhumations to begin, but there has been no movement.

“Like Mugabe (late President Robert), he seems to be employing the same strategy of not wanting to ensure there is closure, four years after he assumed the presidency.

“The coincidence of our memorial and Mbuya Nehanda statue unveiling was by accident. We did not have her in our mind when we planned the event. It is the right of others to respect her, and which we have no problem with, but we are also saying to Mnangagwa – Gukurahundi will not be wished away.”

The government once instituted an official probe into the Gukurahundi massacres but the findings of the investigation by the Chihambakwe Commission of Inquiry were never made public.

There have been calls for Mnangagwa to ensure the release of the report in the spirit of promoting national healing, and to commit himself to compensating the survivors and victims’ families.

In 2011, Genocide Watch, alongside the International Association of Genocide Scholars, classified Gukurahundi as genocide.

Judges who ended Malaba’s tenure are no pushovers