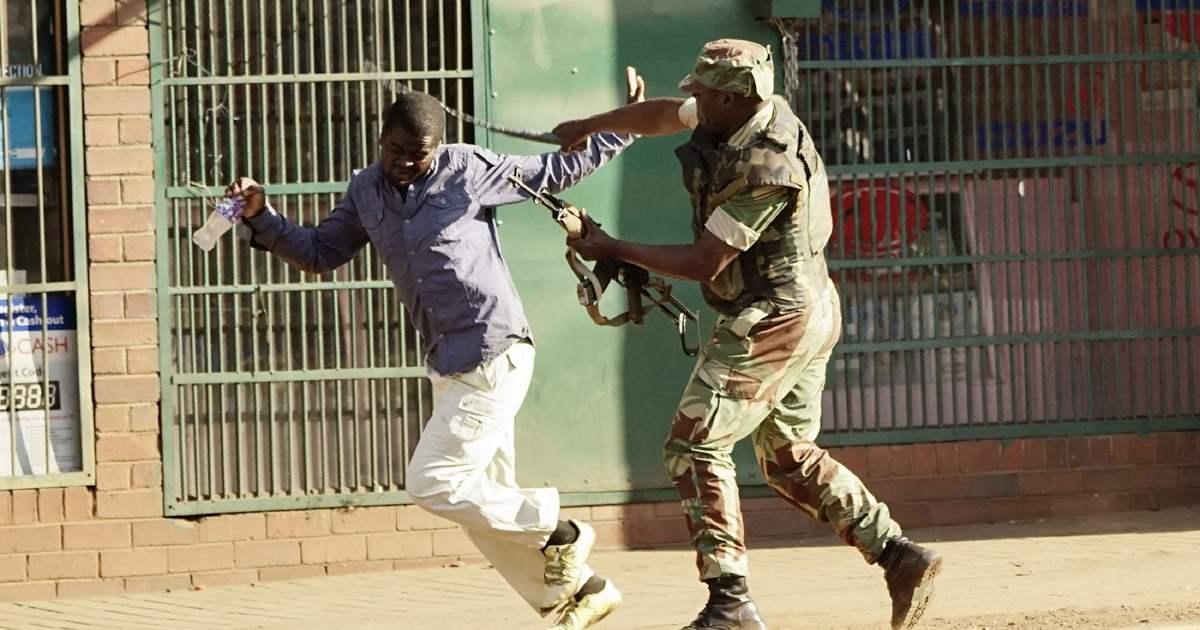 THE Zimbabwean government used the national Covid-19 lockdown to clampdown on civil liberties, with the security forces accused of using excessive force to enforce lockdown rules, a US report on human rights says.

NYASHA CHINGONO
According to the Zimbabwe Human Rights Report, 2020, compiled by the US State Department, Zimbabwean security forces were involved in widespread human rights abuses between March and September 2020.

“From March to September, during a government-mandated lockdown due to Covid-19, uniformed and plainclothes soldiers and police officers systematically used clubs to beat civilians in the Harare central business district and suburbs for violating curfews, failure to wear masks, or failure to exercise social distance,” reads the report.

Security forces also continued to use covert operations to abduct political activists, a tactic used by the government since the 1980s.

“Impunity was a significant problem in the security forces and the civilian authorities who oversee them, including police, military, and intelligence officers. To date, no one has answered for disappearances, civilian deaths, rape, abduction, or torture allegations from the 1980s to as recently as November. Security forces were firmly under the control of the ruling party and were often directed against the political opposition,” further reads the report.

During the Covid-19 lockdown, the Zimbabwe security forces were also implicated in extrajudicial killings, including the alleged murder of opposition MDC Alliance councillor Lavender Chiwaya.

“In August, the non-governmental organisation (NGO) ZimRights suspected members of the security forces in the extrajudicial killing of Movement for Democratic Change-Alliance councillor Lavender Chiwaya. Police ruled there was no foul play,” reads the report.

“Impunity for politically motivated violence remained a problem. The government did not establish an independent complaints mechanism to investigate allegations of security force misconduct as called for in the constitution. Investigations continued into violence from previous years, including state-sponsored violence, that resulted in the deaths of 17 civilians in January-February 2019 and seven during post-election violence in 2018. As of year’s end, there were no arrests or charges in the cases.”

The US report also noted the continued abuse of opposition members, who suffered torture and abduction at the hands of security agents.

The MDC trio of legislator Joana Mamombe and opposition party members Cecilia Chimbiri and Netsai Marova were arrested on 13 May last year and endured 36 hours of physical, sexual, and psychological torture at the hands of suspected state agents.

The three were later re-arrested and charged with making false statements to the police and for faking their own abductions.

Since their initial arrest last year, the MDC trio has been re-arrested on several occasions on frivolous charges.

“The constitution prohibits torture and other cruel, inhuman, or degrading treatment or punishment; however, there were reports that security forces engaged in such practices with impunity and with the implicit support of government officials. NGOs reported security forces abducted, assaulted, and tortured citizens in custody, including targeted assault on and torture of civil society activists, labour leaders, opposition members, and other perceived opponents of the government. Throughout the year police used excessive force in apprehending, detaining, and interrogating criminal suspects,” reads the report.

As of November last year, there were five reports of short-term abductions and assaults by state security actors, the report notes.

“Reported torture methods included sexual assault; beating victims with sticks, clubs, cables, gun butts, and sjamboks (a heavy whip); falanga (beating the soles of the feet); forced consumption of human excrement; and oral chemical poisoning, as well as pouring corrosive substances on exposed skin. As of November, there were a minimum of five reports of short-term abductions and assaults, or torture allegedly performed by state security actors. These instances typically occurred at night, although some happened in broad daylight.”

The report also notes the deplorable state of the country’s prisons, under Covid-19, where prisoners live with little to no social distancing observed.

“Conditions in prisons, jails, and detention centres were often harsh. While some prisons operated below capacity, NGOs reported that most were overcrowded due to outdated infrastructure and judicial backlogs. The Zimbabwe Prison and Correctional Services (ZPCS) did not provide adequate food, water, and sanitary conditions as well as personal protective equipment (PPE) during the global pandemic. The ZPCS sometimes allowed faith-based and community organisations to help address these problems.
“Prison guards occasionally beat up and abused prisoners, but NGOs reported the use of excessive force by prison guards was not systematic,” the report reads.

In 2019, Hilton Tamangani died in his cell at Harare Remand Prison after he was severely beaten up by police before being detained. Tamangani was also denied medical treatment inside prison but no investigations have been made about his demise.

The authorities also sent juveniles to prison, while mentally I’ll prisoners with were also kept inside cells with other prisoners.

Due to lack of social distancing, prisoners are at risk of contracting Covid-19, the report notes. The prisoners have no access to basic medical care.

“Prisoners had access to very basic medical care, with a clinic and doctor at nearly every prison. In partnership with NGOs, the ZPCS offered peer education on HIV/Aids. The ZPCS tested prisoners for HIV only when requested by prisoners or prison doctors.”

Arbitrary arrests and detentions of political activists, labour leaders and journalists like Hopewell Chin’ono were also noted within the period under review.

Law enforcement agents were accused of withholding bail for most accused persons, through veto judicial decisions, despite constitutional court rulings declaring this unconstitutional.

“Police and media reported that security forces arrested more than 105 000 political and civil society activists, journalists, labour leaders, and ordinary citizens from 30 March to September for their alleged violation of Covid-19 lockdown measures or alleged involvement in planned demonstrations in Harare, Bulawayo, Mutare, and other cities,” reads the report.

The report says the security forces punished family members for the alleged crimes of their relatives.

“Mathuthu was not at home when police arrived and remained in hiding as of November. Police detained his sister, Nomagugu Mathuthu, at the Bulawayo Central Police Station, then released her after arresting Mathuthu’s nephew, Tawanda Muchehiwa, on July 30. Muchehiwa reportedly disappeared from police custody and then was left at his residence on August 1, badly beaten by individuals suspected of being state security agents.”