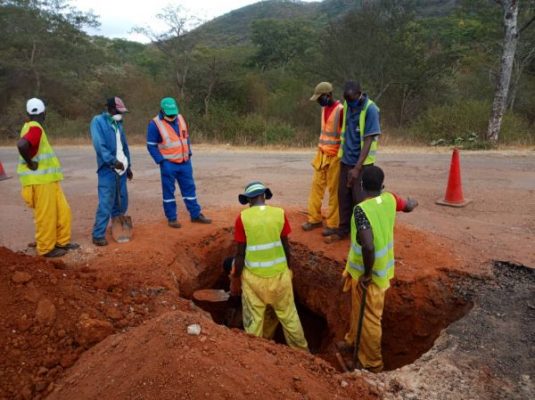 BOTEREKWA escarpment located in the mining town of Shurugwi, 33 kilometres outside the Midlands capital Gweru, boasts of scenic views of a mountainous area endowed with indigenous trees.

For years, in the valleys and at the base of the mountains, gold panners have been scouring for the precious metal, inflicting serious damage on the environment. Environmental degradation has scaled new heights since a new miner, Ansh Blue 4/8, owned by one Mahara in joint partnership with Chinese firm Chenjxi (Private) Limited, has embarked on illegal mining activities in the picturesque mountain range.

Investigations by The NewsHawks revealed that Mahara, through his company Ansh Blue, had intially been awarded an environmental impact  assessment certificate for shaft mining before he joined hands with Chenjxi to embark on opencast mining and vatleaching under the name Anshi 68 North 2 and 3 project.

However, it is the speed at which mining activities resumed early this year that has sparked alarm, even attracting the attention of the Environmental Management Agency (Ema) amid an outcry from locals. Ema officials confirmed to The NewsHawks that the mining operations were illegal, adding the agency is seized with the matter.

High-level sources in the Midlands say powerful Zanu PF politicians are — behind the scenes — involved mining operations in the gold-rich Shurugwi mountain range, hence the display of impunity.

The surrounding communities are not been amused by the miners’ degradation of Boterekwa, a place they have for years considered to be a paradise for nature lovers.

“We wonder how the new miner got a licence to mine from the bottom to the top of part of Boterekwa. Of course we have known illegal gold miners digging here and there at the base of the mountain but to go on to raze down part of the range completely. This is new to us and totally unacceptable,” a Shurugwi villager said.

This week, Ema Midlands provincial manager Benson Basera told The NewsHawks that Ansh Blue mine had been ordered by the environmental agency to stop illegal mining operations.

“The miner in question has an environmental impact assessment for shaft mining,” Basera said.

“The miner however went on to expand the mining activities to include the components of opencast mining and vatleaching.

“The components were not included in the initial shaft mine project and according to the EIA regulations illegal. Ema has served the miner with environmental orders as outlined in the Ema Act (chapter 20:27) to stop implementing the two components whose EIA report or document has not yet been submitted for review to Ema.”

He added: “As Ema we had to issue a ticket of ZW$300 000 to Anshi for including vatleaching and opencast in the mining project. Following the illegal activities, the scenic area was disfigured.”

Basera said the miners were flouting environmental standards and had to be stopped.

“The fact that the two operations (opencast and vatleaching) are not EIA-certified disqualify the operations as being done out of specified standard. This is why Ema has stopped the illegal mining operations components,” he said.

Vatleaching produces large amounts of waste effluent which are acidic and the miner at Boterekwa has therefore been polluting the environment with toxic wastes putting the lives of animals and people at danger.

Through opencast mining, the joint mining venture between Mahara and the Chinese company has not only destroyed the natural landscape but also exposed part of the escapement to soil erosion and pollution of water bodies downstream.

The provincial mining office referred all inquiries to the ministry of Mines.

Mines minister Winston Chitando did not respond to questions sent to him.

Over the years, illegal panners have been digging for the precious metal at Boterekwa and raids by the police have failed to stop their activities.

Environmentalists are however worried not only about the damage to the environment but also to road users as well.

Fears have arisen that artisanal miners operating illegally on the escapement could have dug tunnels beneath the Boterekwa highway and, as a result, there is a risk the road could collapse anytime.

A few years ago, the ministry of Transport had to patch what was suspected to be the entrance to a tunnel in the middle of the Shurugwi Boterekwa-Zvishavane highway.

Mining activities coupled with sub-standard environmental practices by both local and mostly Chinese gold and chrome miners along the Shurugwi-Zvishavane highway has left extensive environmental degredation, with people questioning the government’a commitment to stopping the illegal activities.

Related Topics:BoterekwaGold panners
Up Next