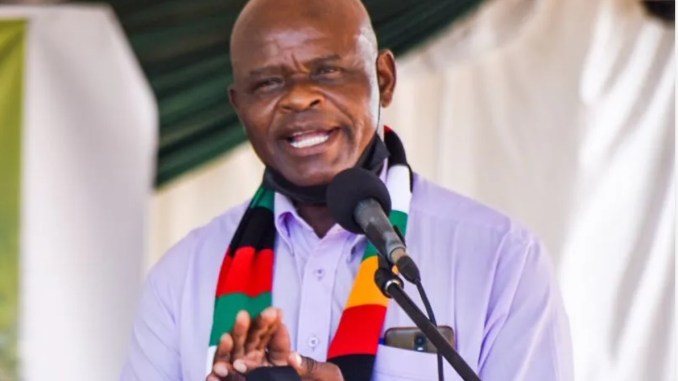 BLESSING Chebundo (pictured) became “marked for death” in Kwekwe, his house razed down and forced into hiding for days as Zanu PF hounds bayed for his blood.

His sin was daring to challenge Emmerson Mnangagwa for the Kwekwe Central constituency seat in 2000.

He thumped the then Midlands hardman before repeating the feat in 2005.

Dozens of people were injured, others killed at the hands of the Zanu PF militia then known as the Taliban after a terror group in Afghanistan following a decision by Chebundo, then a staunch and daring trade unionist, to challenge the then Justice minister who was regarded in Zanu PF circles as the Midlands provincial godfather.

Mnangagwa at the time was seen as a potential successor to the late former president Robert Mugabe and was leading a faction battling another led by the late decorated military commander Solomon Mujuru in the internecine Zanu PF factional wars.

Defeat at the hands of the little-known Chebundo would expose his lack of popularity in a province which was supposed to be his citadel. Therefore, every threat, real or perceived, had to be stopped at all costs and by any means necessary.

Violence and intimidation were the chosen methods ahead of the 2000 polls.

In reports by Amnesty International, the United Nations and several human rights organisations, Chebundo’s name featured prominently among politicians whose lives were at risk during the era.

Amnesty International was particularly concerned by reports of soldiers beating civilians in suburbs of Harare and Kwekwe because they live in areas where people voted for the opposition.

Death threats were reportedly made by high-ranking ruling party officials against Chebundo and at some point Bulawayo South MDC MP David Coltart and others were also threatened.

Over 30 MDC members were reportedly killed,  according to reports, including in Kwekwe where MDC ward chairperson Mutyanda Mandishona was beaten to death.

In the period leading to the election, Chebundo was severely intimidated and his house totally destroyed by fire. Similarly, his campaign manager, Abraham Mtshena, had his family beaten up and his house set alight.

One of his sons suffered burns and had to be hospitalised. All these cases have been reported to the police but, as Amnesty International has noted, no action was taken.

Many of Chebundo’s then supporters still have scars from the 2000 election.

Despite the terror campaign, he prevailed over his then nemesis.

Chebundo garnered 15 338 votes against Mnangagwa’s 8 352, but before the results were announced he fled his home. Mnangagwa’s hounds were searching for him.

It took Chebundo some time to come out in public and, when he did so, it was only after Mnangagwa’s hardline backers had grudgingly accepted that their political godfather had lost. Mugabe then rescued Mnangagwa by appointing him speaker of Parliament.

“There was a bloodbath in Kwekwe and people died. Chebundo survived several attempts on his life, his family and friends suffered at the hands of Mnangagwa. We are surprised with his decision to join Zanu PF, particularly joining hands with his tormentor, Mnangagwa,” Chebundo’s former ally who is now with Nelson Chamisa’s Citizens’ Coalition for Change (CCC) said.

“I remember when thousands were violently forced to a rally addressed by (the late former President Robert) Mugabe in Mbizo Stadium in 2000 when Mnangagwa wanted to pose to the party as a strongman in the district and also in the province. Mugabe stood and said he was happy with the crowd that thronged the stadium and inquired if they were forced or not and thousands walked out in protest and this was a day the people of Kwekwe showed him they did not want him even if he had used violence against them. It was Chebundo who was the face of all that and, with the scars he had suffered, it is now shocking to hear him speak like this.”

He was responding to Chebundo’s unrelenting praise-singing of his former nemesis in Epworth during a Zanu PF rally where he showered Mnangagwa with praises while blasting his former allies in the opposition as lacking wisdom.

Despite the violence unleashed on him and many MDC supporters at the height of bloody political violence in Kwekwe that coincided with the chaotic land reform programme, Chebundo, much to the chagrin of those he struggled with back then, now chooses to praise Mnangagwa and has offered to be his “disciple”.

This was also despite his statement during the 2018 harmonised elections that Mnangagwa would be beaten hands down “Kwekwe style” as he was part of an old guard which had destroyed the country.

“I am simply telling Zimbabweans that Mnangagwa has been part and parcel of the old order since 1980, and after 38 years of him being in government, it is high time that we should put someone young who can bring hope for Zimbabweans,” he said back then.

Chebundo told The NewsHawks this week that he has forgiven his tormentors.

“What you have to do if you are a politician or any other person is not to continuously look at the negative,” Chebundo said.

“We have set out to benefit the institution and the country so if you say since ‘I was once punched by so and so I cannot therefore work with them’, that is not progressive. The past is past and we are not looking into that.

“A human being is bound to change and you cannot pin anyone down for what he or a party did in the past. In real life, you do not look at who did what to me and I think God has a reason. Are the people who are there these days still doing what they used to do then? We are not God, and we can’t judge people in the past but we judge what they are doing currently.

“People may see what happened in the past and the blame being apportioned to the President, but remember the buck did not stop with him then. Now he is there, look at the decisions he is making, look at the way he is handling things and accepting back people, being magnanimous and so on.”

He spoke ill of the new Citizens’ Coalition for Change, saying the party and its leader Nelson Chamisa lacked the maturity and wisdom to take the country forward.

“They said we sold out when we left the opposition, but we are vindicated now because we now see what has happened to the MDC, it is now non-existent. We have seen they have abandoned the Tsvangirai party and the original MDC beliefs where we stood for the people, for the workers and for principle. Caps United (football club) cannot just wake up to say we are no longer Caps United but we are Manchester United and the coach, in this case

Chamisa, saying he has only himself remaining in the party,” he said.

“Now they have abandoned the workers’ struggle, the colours and all, yet he comes to say vote for me because I am popular. You are taking the people for granted. They are not taking people seriously.

“I refused to have my name abused by the opposition. I am not beating my own drum, but I prevailed in the past political contestations. The name was now being used to say he once did this so he can do that and all. I refused all that and chose to stand with the revolutionary party. What guarantee do we have as a country that this one who is failing to run CCC can govern a country?”

Chebundo’s name was used extensively ahead of the 2018 harmonised elections with calls for Chamisa to “Kwekwe him” in reference to the 2000 and 2005 defeats that resulted in Mnangagwa abandoning the seat. The Chirumhanzu-Zibagwe rural constituency was then specifically created to rescue Mnangagwa.

During the rally, Mnangagwa insisted it will be a tall order to have the opposition rule this country.

“Go and tell these opposition men that if one starts walking from here to China, he will reach there before the opposition reaches State House,” Mnangagwa told thousands of his party supporters, most of them bused from across the country to Harare for the gathering that kick-started the Zanu PF campaign ahead of by-elections set for 26 March.